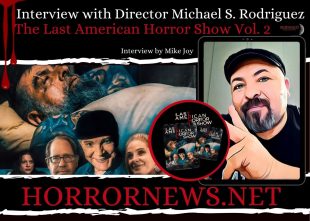 When did you decide you wanted to make VOL 2 of THE LAST AMERICAN HORROR SHOW?

It kind of happened by a result of kinetic energy. After the first film I just couldn’t sit still and enjoy it’s release. I felt I had to keep moving, so I directed a few shorts and produced on others friends were making. When we all stood back I said Hey I think we have a sequel here! That’s how it came about. 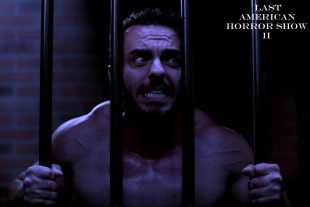 What have you learned as a filmmaker between those to films?

I’ve learned a great deal between the first and second. I’ve learned to be patient with the overall production. It’s not about rushing out a project to remain relevant. It’s about taking your time to make a project that’s remembered. Of course mistakes are made along with way with each film, but that’s the nature of the beast and the process of evolving into a much better filmmaker each go around.

I’d have to say working with Legend Mel Novak ( Bruce Lee’s Game of Death) and Mike Ferguson on the Killer Callahan Meets a Monster segment. They had such chemistry in their roles and the set was something Roger Corman would have came up with. Very tight quarters, so lots of smoke and mirrors tactics to make their scene look like it took place in a huge prison.

That’s a tough one because they were all a joy and the amount of talent I worked with was amazing, but I’d have to say the Sci-fi Alien rip-off segment Terror at Station 13 Starring Jonathan Tiersten (SLEEPAWAY CAMP). It gave me a chance to branch out into another subgenre and work with scale modeling. It’s cheesy as all hell, but purposely done for that affect. So the opening of that segment which was shot in my living room using miniatures was probably my favorite to direct and actually shoot myself.

What is the biggest obstacle you faced while making THE LAST AMERICAN HORROR SHOW?

The first film was a challenge financially, but this film was much easier as my skill set and business head got better and I was working with other talented directors, Montgomery Dodson (Reformation) and Ricardo Vasquez (Countdown, Dine in Die Out). So I would say gelling the whole thing together to make a diverse and interesting anthology which I think we accomplished.

I’d say writing and directing the segment Jack Incarnate. The story is so layered with suspense and the performances between Maria Olsen (Percy Jackson and The Lightening Thief) and Geovonna Casanova ( Apex Predators) was astounding! It’s a must see in my humbled opinion.

Do films get overwhelmed in the VOD market and how do you fix the problem?

It’s a constant, but strategic plug of your product on social media, plus establishing a great fanbase that knows you’re an everyday person and approachable. I have fans that have watched the first film reach out all the time from different regions of the world and I will always give them a minute of my time to sincerely thank them and remind them to be on the lookout for more.

What actors would you love to work with?

My list is a mile long and it’s filled with character actors. I love character actors such as Terry Kiser( Weekend at Bernie’s) Vernon Wells ( The Raid Warrior), Charlie Day and Danny DeVito (It’s Always Sunny in Philadelphia), Danny Trejo ( Machete) and so on. I could go on for days with this one.

What film would you love to remake?

I don’t like remakes or reimaginings, but I would if it was a possibility recapture the spirit and tension of the Original Jaws and use all practical FX and big budget animatronics to do so. It’s a big wish, but anything could happen in the world of make-believe.

I’m currently in the middle of my latest Film titled Film Fiend starring Sally Kirkland ( JFK, Best of the Best) and newcomer Sparkling Soojian ( Dealings, Day of the Pigs). I also produced a film shot on 8mm Kodak hitting the screens this year titled Dead Community Guild helmed by Director and Friend Emil Ink and I’ve just wrapped my scenes with Eric Roberts in the upcoming The Dead Rose starring Vernon Wells, Eric Roberts, Richard Tyson that is directed by Jimmy Drain.