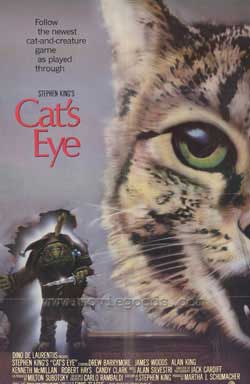 Three shocking Stephen King short stories are linked by a stray cat that roams from one tale to the next. First, Dick (James Woods) is trying to quit smoking by any means necessary — even joining a shady self-help organization. Next, Johnny (Robert Hays) is an adulterous man forced by the wronged husband to circle a building’s hazardous ledge. Last, Amanda (Drew Barrymore) is threatened by an evil gnome who throws suspicion on the family cat.

I am a big fan of the horror anthology movie which, if you’re unfamiliar with the term, is typically a set of three or more stories tied together by a single character, theme, or mood, and filmed by a single or by multiple directors. Often times the stories contain a moral or metaphor about modern society. Some famous examples of the horror anthology include Dead of Night, Twilight Zone the Movie, and Creepshow (also written by Stephen King), as well as Cat’s Eye. Since the stories have to be told swiftly and concisely, like a short story, there is no room for the filmmaker to pad the movie or for the audience to get bored. Two of the three stories in Cat’s Eye are from Stephen King’s collection Night Shift (most famous for containing Children of the Corn).

Originally “Sometimes They Come Back” was going to be used, but the producers thought it would work a lot better as a feature film. The movie begins with shots of a stray cat wandering around the city. Staring into a window, the cat sees a young, eight or nine year old Drew Barrymore transposed onto the face of a mannequin, and pleading for help. The cat is then scooped up and taken into a metal room in an office building. If you haven’t guessed by now, the cat, who psychically responds to Drew Barrymore’s unconscious cries for help, is what links these three short stories together.

Cat’s Eye’s first tale is “Quitters Inc.” Dick Morrison (James Woods) is dropped off in front of an office building by a friend who promises him that he can quit smoking. This is no ordinary self help program, though. In the waiting room he sits next to a man sobbing while moments later the man’s wife walks through with her hair burnt. She is shaking as if just dealt a “great shock.” Morrison Woods is introduced to Mr. Donatti, the head of Quitters Inc. who explains that the company uses the technique of constant surveillance to insure that its clients remain tobacco-free. If they cheat, punishment in the form of torture is not targeted toward the client, but toward his loved ones. Quitters Inc. had some really entertaining scenes such as when Morrison is surrounded by hundreds of smokers at a business party, something I can relate to in my life. My main complaint is how easily anthology stories go from gripping to goofy. As Dick’s minds wanders people become giant cigarettes and start blowing smoke through their ears. Inevitably, while stuck in traffic, he succumbs to nicotine craving when he finds some old cigarettes in his glove compartment. There are no surprises in this tale and its very straightforward ending fails in its attempt to shock. As the cat escapes further torture from Donatti he heads to Atlantic City, where the next tale begins.

The next story titled The “Ledge” is about Johnny Norris (Robert Hays), a middle aged tennis pro who plots to run away with the wife of a notorious mob boss. Cressner (Kenneth McMillan), obsessive gambler and mob boss, kidnaps Norris and plants drugs in his car. Cressner explains to Norris that he can walk away with 50,000 dollars, his wife, and a clean car if he’ll takes a wager. All Norris has to do is walk all the way around the five inch ledge that surrounds the 38th story of Cressner’s building. Seeing no other choice, Norris takes the wager and begins his trek across the ledge of the building as Cressner eggs him on. The suspense is pretty intense as the audience is given a strong visual image to supplement Stephen King’s words. Even knowing the outcome, this is an exciting segment particularly suspenseful when a pigeon starts pecking incessantly at Norris’s ankle as blood slowly starts dripping through his sock. However, the book’s more ambiguous ending is more effective than the movie’s rather unambiguous climax where Cressner gets what he deserves. .

The cat leaves Atlantic City and is picked up in Wilmington, North Carolina by Barrymore, who has appeared several times earlier in the film as a kind of astral projection begging the cat for help. This starts the third and final segment “The General.” The cat finds Amanda, Barrymore’s character, and they form a bond. Meanwhile we see a first shot view of a small creature running across the front lawn of the house. Amanda’s mother is dead set against the cat, now named General, sleeping inside, especially with a pet bird around. Before General’s arrival, the little creature darting across the lawn is revealed as s a small troll with a truly malicious design. Now the troll makes mincemeat out of the family bird and “steals Drew’s breath.” Not unexpectedly, Mom thinks General killed the bird, not realizing that General was defending, Amanda from the troll. The segment ends in true Hollywood movie fashion as General escapes the pound and rushes to Amanda’s side to defend her against the troll before it can “steals her breath” again and kill her. I have mixed feelings about this segment, especially the special effects used to depict the troll.

The troll’s small stature is emphasized by camera tricks that do not always create the best visuals, especially during its fight with the cat. Although it much more powerful than today’s reliance on CGI, I think a much more effective use would have been to use stop-motion animation. Of course I don’t know the problems that might have arisen using that type of technique with live animals. Overall Cat’s Eye is a fun visual retelling of some of Stephen King’s shorter and lesser works, and a good overall horror film for all ages. Watch out for the cheesy puns with the film’s soundtrack selection, though.