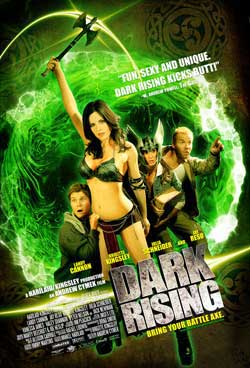 A broken heart, a battle axe, a demon and a lesbian ex-fiancée… Jason Parks’ life goes from bad to worse as a series of supernatural events turn his dream of reconciliation with ex-fiancée Jasmine into a portal seeking, demon hunting nightmare.

Dark Rising is a 2007 independent Canadian horror comedy starring Landy Cannon, Brigitte Kingsley, Julia Schneider, and Jason Reso. It’s directed by Andrew Cymek. It’s about a guy named Jason (Landy Cannon) who isn’t having the greatest life. He comes up with a camping trip with him and his friends to take so he can win back his ex fiancee’ Jasmine (Vanessa James). Instead of getting Jasmine back, demons come along and turn this camping trip into a nightmare.

The movie opens up with a man (Peter Nelson, who plays Vincent) translating a book written in an ancient language. He tucks his daughter Summer Vale (Taylor Barber) into bed and continues reading the inscription out loud, which inadvertently summons …something that can only be described as green. It pulls Summer into another world. The opening credits roll. We later see three girls in a book store. Renee, (Julia Schneider) Jasmine, and Marlene (Haley Shannon). Renee has been having nightmares and buys a book on witchcraft to decode her nightmares. Meanwhile, Jason is trying to win back his ex, Jasmine by taking everyone out on a camping trip. (Along with his best friend Ricky, played by Jason Reso.) What he doesn’t know is that Jasmine and Marlene are dating and Jasmine is having fun leading him on. Meanwhile, Renee gets Marlene and Jasmine to help her decode nightmares. When that doesn’t work Marlene and Jasmine go out and have sex. Jasmine is bitten and a minute later, a demon comes out and kills Marlene. Just then, grown up Summer Vale (Brigitte Kingsley) saves the rest of them.

This film was nominated for six awards over in Canada. We’re not trying to be mean, but we don’t agree. Sorry, but we really didn’t get into this movie. The acting wasn’t bad or anything, it was just that the story wasn’t very good. They seemed a little too interested in the lesbian sex scenes rather than telling a good story. (Although the beginning started out solid.) It seemed like they wanted to make men drool over the hot lesbians more than anything else.

This is one of those movies we wished an hour into it the director had stepped into frame and said “Sorry audience, it’s just not happening. But to finish the running time out, here’s a reel of athletes getting racked”. The comedy was nonexistent. The action was people swinging props at the camera. The plot wandered around the same area. It’s a pity because all of the elements were in place. Everyone on the crew knew what they were doing from the camera work to the editing room. It’s the source material that failed.

When doing a sword and sorcery picture you really have to make a hard choice from the get go. Is the audience supposed to take the story seriously or not? If the answer is yes, you have to demonstrate a complete earnestness with your characters devoid of any smugness or camp. If the answer is no, give the audience the camp and the self aware wisecracking. Dark Rising aims squarely between the two and unfortunately it hits the target.

Like we stated before, this movie was nominated for six awards in the category of comedy, and we can’t figure out why. There were several scenes where we should have laughed. For example, when the demon was behind Jason and didn’t know it, without looking behind him he said, “It’s behind me, isn’t it?” When Renee made a joke about how dumb men can be, it should have at least gotten a chuckle out of us, but it didn’t. It seemed as though they had jokes that should have been funny, but didn’t even get a smile out of us. Maybe the jokes were too easy. This is something that we’re just not sure about.

It bears repeating, when a serious film fails it becomes funny, which is not to say that it becomes a comedy since comedies have humorous intentions to begin with. Funny is still entertaining even if you’re laughing at something and not with it. When a comedy fails it becomes unfunny. With no unintentional humor to be had, the movie becomes unentertaining. Such is the case with Dark Rising. We weren’t entertained. Sorry Andrew Cymek, but if you’re determined to do a sequel you really need to raise the bar for yourself.