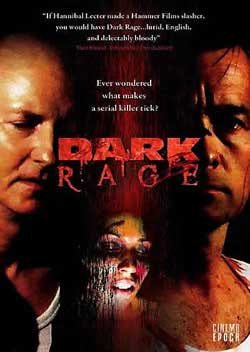 Chris and Kate are moving into a new flat as times have just gotten rough for the young couple. The two had better start learning to get along however since two of their other flat mates have dark secrets that neither one of them were even ready for, did I mention that one of them even has a past with Kate?

Starring: Christopher Dunne, Christopher Dane, Sarah Akehurst and Brett Findlay
“Some years down the line I had no more tears to cry….I just bit the bastard!”

I am starting to become a hardcore fan of British horror, that is a statement I thought I would never make again but here it is once again. Lee Akehurst’s Dark Rage is an example of the things I love about British horror, even though we have seen everything he is going to bring to the table already.

Dark Rage starts with a great music score and the footage of a parking garage. During the opening few minutes the viewer is treated to a music score that really does continue to be great throughout the rest of the movie. Over the music there are the faint cries of a woman needing help and it doesn’t take Lee Akehurst very long to show us why she needs help. The woman is tucked into a corner while a man stands with a knife in front of her. Suddenly he swings at her and it is revealed to all be a dream. The woman who had the dream is named Kate and her and the live in boyfriend Chris are about to move into a new flat.

One of the first things that Chris and Kate discover when they move into the new flat is just how friendly their two neighbors are. Ned, who is the landlord, lives upstairs with his young daughter Lucy and works at an office for computer service. Paul, who lives down stairs works at a mortuary. Paul and Ned have more in common than the flat however as both of them are also serial killers, but of different variety.
Ned is an older man and seems gentle and friendly. His coworkers don’t care too much for him, and in fact some of them plot against him in order to get his money. Ned however will quickly and violently kill anyone who would try to hurt him or Lucy, and he does so in several scenes including a fantastic scene in which Ned baits a would be child molester into the woods only to violently stab the man to death.
Paul is a different type of serial killer, his specialty is women.

He doesn’t like the “dirty” women that crawl around pubs, he only wants his women to be clean. How does Paul get these “clean” women, he carves them up and then murders them. When the victims bodies are brought to the mortuary Paul quickly cleans them up and then has his way with their corpses. There is a quite disturbing sequence in which the viewer watches as Paul has sex with a fresh corpse, only to show the corpse to the victims mother for identification a few minutes later.

Chris and Kate also have their own problems, Chris is what most of us refer to as a dog. Chris doesn’t do much of anything but spend Kate’s money, and he also goes out to pubs to pick up on young women and continues to talk to a young tart that he met while Kate was in the hospital. Kate’s past is revealed through the course of the film and she was in the hospital for a violent rape that happened to her, so yeah Chris is really a great guy!

So there are a lot of little subplots inside of Dark Rage that really do get the viewer interested. You have Ned’s loveable serial killer personality and Paul’s sadistic serial killer personality constantly being shown on screen and the murders that are shown are captured well. I’ve already mentioned that there was carving and stabbing, but there is so much more than that! A man is set on fire, a man has his face rammed into a computer screen and people are also strangled. There is actually a decent body count for a film I would consider more of a dark thriller than an actual genre piece.

The characters continue to go about their business until there is finally a fantastic climax. The climax includes one thing allot of fans of genre cinema will see coming about forty five minutes before it happens but for the most part there are some interesting facts thrown in at the end that bring the whole thing together.

Lee Akehurst also seems to be a fan of the dream sequence and flashback sequence as they are used throughout the film. One of the best examples of the flashback use is one of Ned’s in which he once again relives the moment of his life where his father brutally stabbed his mother to death in the kitchen in the heat of an argument. The entire sequence is captured perfectly on film and will definitely bring a chill down many spines who watch it.

Dark Rage definitely isn’t for those who are thirsty for the red stuff, it was made more for those who like a little atmosphere with their horror. If this applies to you what are you waiting for hurry up and see this one!