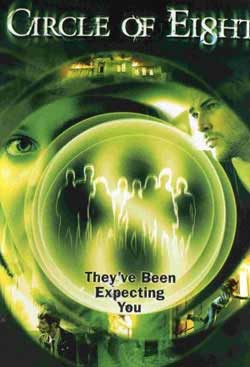 Jessica moves into a loft on the eighth floor of a Los Angeles apartment building called The Dante. The other tenants all seem friendly at first, but when she starts witnessing horrible deaths, she must team up with her neighbor Evan (Doom) to solve the mystery — and uncover her own connection to the place.

Losing a loved one is a haunting experience that can never be erased in one’s mind, no matter what. This is the case in Stephen Cragg’s “Circle of 8,” where main protagonist tries to forget a troublesome past by moving to LA. Unfortunately, Jessica learns that she can’t run anymore after her newest move leads to more devastation.

Jessica( Austin Highsmith) is making her big move to LA, and is blaring music while noticing her new surroundings of the big city. She gets to her destination, Dante apartment complex, and takes her belongings from her car. She drops her toothbrush, and charming Evan(Ryan Doom) is there to save her drop. He invites her into the complex, and she meets the elevator attendant, Ed(John Bishop.) He advises her no to go into the file room, as they make their way to her floor. Jessica makes it down the dark hallway to her room, and is greeted by a pitch black new apartment. She opens all the drapes to let light in, and notices a male across the street with a video camera. She rushes away from the window, and the voyeur with the camera is shown again taping two women making out in a secluded hallway of the Dante. Ed comes in and tells him he is not doing what he should be, and he leaves.

While getting her apartment ready, she is visited by others that live in the complex. They all mysteriously know her name, and keep begging her to attend the New Years Eve celebration on the roof. She finds comfort in Evan, being less creepy than all the rest of the apartment dwellers, and likes the gift he gives her of a portrait of swirling lines. Things get creepier for Jessica when she walks down the hallway, and finds one of the men she just met dead. She cries for help, but everyone reassures her that she must be seeing things. This happens time and time again throughout the movie, until the only ones left art Jessica and Evan. In the end, Jessica realizes that all this happens for a reason, and she doesn’t let her past catch up with her again as it did in before.

“Circle of 8” keeps the viewer guessing, while wondering why all these people are dying around her, but nobody seems to suspect what is going on within the Dante. The deaths are pretty brutal from hanging, suffocation, elevator malfunction, and so on. One of the most interesting things was the Mountain Dew experiment about half way through, where Evan does a chemistry experiment in which he makes Mountain Dew glow. I found this interesting, but cheesy since the movie is in fact sponsored by Pepsi Corporation’s Mountain Dew. Also in Evan’s room, there are long sheets that hang from the ceiling that display projected pictures of figures diving amongst a sea of green. This of course also alludes to a Mountain Dew beverage, which you can’t help but crave after the viewing of this film. I wasn’t a big fan of the ending, in which we pretty much go through the movie two times in a row, with the ending being a shorter, summarized version of the film with a different ending.

With a young woman moving to a big city to find herself outside of the country she is used to, Stephen Cragg’s “Circle of 8” is a thrilling tale that ends with Jessica learning her lesson about not running away from the past. Even though the movie felt like it was a little longer than it should be, the twists and turns keeps the viewer attached to the storyline of why is all this happening to Jessica. The end result is a satisfying end to Jessica’s problematic life.