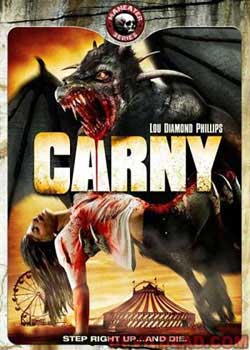 Arriving in rural Nebraska, a traveling carnival attracts the locals with a caged monster known as the Jersey Devil. But fascination soon turns to fear when the beast escapes and goes on a rampage, killing everyone it encounters. Now, the town sheriff (Lou Diamond Phillips) must lead a team to track the creature even as a group of religious fundamentalists forms a lynch mob to kill the beast they believe is the devil himself.

How we just love SyFy original movies. While most are just a complete waste of time, a distinct few are solid and might I say great films.

Well, I just finished watching “Carny” and I think it is a first for the networks originals. Was it a bad film? Yeah, it was pretty silly. Now, it has been a while since I saw a film that landed in the “so bad it’s good” category, but “Carny” just has. I like to think of it as the Jersey Devil vs. La Bamba, a much more fitting title, but as silly as the film was, I enjoyed watching it and it was rather fun. Director Sheldon Wilson who had a previous SyFy effort in the Sean Patrick Flannery vehicle “Kaw” has enlisted former A-lister Lou Diamond Philips to help add, uh, credibility (?), to his project and have a good time.

Cap (Alan C. Peterson) is the carnival head who’s carnival is on the brink of extinction when he finds a creature that can make him loads of money. A creature that he will capture for his own personal gain at any cost.

A mysterious van with New Jersey license plates in found outside a small town and Sheriff Atlas (Lou Diamond Philips) is more than curious as to why it was abandoned. Cap’s carnival has moved into the town and Atlas wants to question the manager and make sure their permits are in order when he is given a sneak peak at the captured creature.

Something doesn’t seem right but he allows the carnival to operate, against the wishes of local pastor Father Owen (Vlasta Vrana) who seems to think that they brought the devil himself along with them. When the show starts the creature escapes, wreaking havoc around the small town claiming victims, including the pastor’s son. Cap wants to recapture the creature alive, Atlas wants to restore order to his town, and Owen wants the lord to help him seek vengeance on the creature…the Jersey Devil. 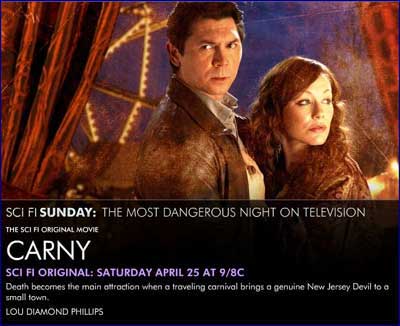 When watching these SyFy originals you have to go into it with a certain mindset. These films are not high art or are they meant to be award winning material. They are meant to entertain, though most of them even fail to do that, “Carny” was actually worth the time. The first thing I noticed when they actually show it is that the CGI creature we get to see didn’t look half bad. Aside from a couple of odd or stiff movements, I actually really liked how it look. The film was a little light on the bloodshed but being a television premiere it was expected. The story is pretty basic, no major surprises but served its purpose well enough to keep me interested.

Lou Diamond Philips is an actor who at times is hard to take seriously, he is just one of those guys. I don’t know how he feels about having to work in films like these, as opposed to his short-lived Hollywood history, but I think he has found his calling. I don’t mean that in a negative way at all, he just seems like he is fun to watch here and would like to see him find a better project in this genre. A.C. Peterson was great as the head of the carnival, a slimeball ready to risk the lives of everyone around him for his own financial gain. The acting for the entire project was above the standard for this type of film. 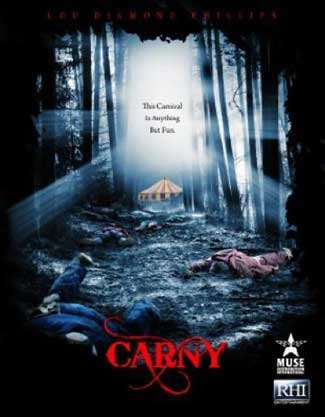 “Carny” is an annoying title and a bit misleading. The creature our hero must combat is the Jersey Devil which is a legend I have always enjoyed. It was nice to see it used here and the creature was a solid representation of what many have believed it to look. This movie is fun though forgettable, though many may find it a worthwhile view on a boring night.