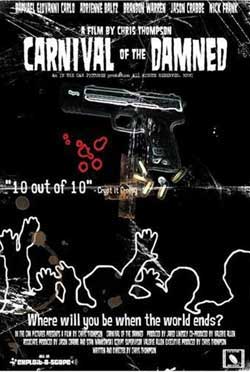 The film follows a detective, a rookie officer, a waitress, a reporter, and a hitman stopping a cult from taking over with a legion of the walking dead. Where will you be when the world ends?

A demon-worshipping cult summons forth zombies to turn our beloved planet into a world of darkness and evil, which forces two cops, a waitress, a reporter, and a hitman to join forces to battle the rampaging undead. Faster than you can say,”They’re coming to get you, Barbara”, these 5 reluctant warriors become mankind’s last hope for survival in this dead-on tribute to 70’s-style Grindhouse horror flicks.

RAMBLINGS:
I have to say it….HOLY SHIT!!! Watching this DVD did two things for me…first, it blew me away – plain and simple. Second, it took me back to the 5th grade, when either my older cousins or my next door neighbor were sneaking me into theatres and/or drive-ins to get my weekly horror fix. In fact, if it not for me being 60 (ok, maybe just a little more) pounds heavier and surrounded by advanced technology, I would have sworn that I was actually back in the late 70’s/early 80’s while watching this flick.

Case in point, here’s the story: A vicious demon-worshipping cult is terrorizing the Seattle area – shooting up bars, innocent bystanders, etc. Badass cop Harry is reluctantly teamed up with timid rookie Todd to investigate. From there, they meet a waitress with Demonology knowledge, and a reporter digging deep to try and find the rest of the story. After our intrepid heroes fail to successfully halt a ritual in the woods, zombies now walk the Earth. Harry decides to look up an assassin acquaintance of his to gain more experienced help and massive firepower to combat the ever- faster growing army of undead. And in true 70’s fashion (hell, even 90’s-era Grosse Pointe Blank), this hitman is a good guy – if he comes knocking on your door, chances are you did something bad enough to deserve him being there. After a montage of readying weapons & explosives that would make Stallone smile with pride, our Motley Crue of saviors head out to make one last stand and attempt to destroy the evil once and for all.

“My world ended the day my father died at the carnival.”

“Yeah, well…now you’re going to have to deal with the carnival of the damned.”

All five of the leads kicked ass. I have no idea if this is the first acting they’ve all done, or if they each have 37 flicks under their belts – they were all awesome. As supercop Harry Stanton, Carlo appears to be channeling everyone from Richard Roundtree as Shaft to wrestling superstar The Heartbreak Kid Shawn Michaels, and he pulls it all off flawlessly – I am a HUGE fan of this guy now, so hopefully we’ll see more out of him in the future. Adrienne Baltz proves that you don’t have to be a bleach-blonde, silicone-stuffed freak of nature to play the female lead in a horror flick, which in Hollyweird seems to be the current trend of the times. I’ll take her natural, girl-next-door beauty any day of the week over Hollywood’s current idea of what a leading lady should be. Brandon Warren plays rookie cop Todd with just the right combination of almost-toughness, naivety, and compassion. Jason Crabbe portrays reporter Tony better than you would expect in a horror flick – he doesn’t have as much to do as the others, but he at least serves a purpose and doesn’t grate on the nerves like most celluloid reporters – always a plus. Nick Frank, as hitman Dean, gives us equal parts Josey Wales, Snake Plissken, and Martin Blank – excellent job from all!

Writer/Director Thompson hit all the right buttons with me on this flick. The directing style and dialogue reminds me of very early Wes Craven/Jack Hill/Don Siegel, mixed up with Romero’s zombie action – and yes, for you purists out there, they are of the slow-moving variety. The score took me back to the 1970’s John Carpenter; synth-heavy & always pulsing right along at a crisp pace. The movie itself is dark, dank, grainy & gritty; the soundtrack ranges from audible to blaring…with very few exceptions, all just like it would have been had you been sitting in a Grindhouse in the 70’s. Mr. Thompson should be very pleased with himself the way this turned out – a 4 year labor of love; made by a horror fan, for horror fans. According to his MySpace page, this is only the first of five total DAMNED flicks. You can keep tabs on Chris Thompson and everything to do with the Damned epic saga at:

LAST WORDS:
As horror fans, we’re forced to tread in a seemingly unending sea of unnecessary remakes and big-budgeted sh*t out there these days. Its movies like this that totally strengthens my faith in not only independent horror, but in the entire genre as a whole, once again. It certainly beats the dresses off most of the remakes I’ve had to suffer through in the theatres these last few years. If you’re a fan of 70’s-style exploitation & horror flicks,

CARNIVAL OF THE DAMNED will knock your f*cking socks off. This is one messed up, bloody, balls-out zombie ride – whatever it takes to get your hands on a copy of this flick, DO IT!!!

Tags Carnival of The Damned