RainForest Horror: A Cinematic Trek in the Green Inferno – Part 1 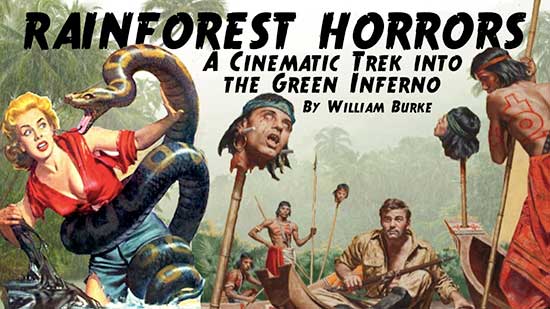 Scholars say there are four primary conflicts in literature—man vs. nature, man vs. man, man vs. self and man vs. God. Well, no backdrop better combines all these elements than the Amazon Rainforest—an untamed jungle populated with hostile tribes where all of God’s creatures are out to devour you, if your own fear and ignorance doesn’t kill you first. That’s why this incredibly beautiful, yet deadly chunk of Mother Earth has been the locale for so many terrifying films. It’s an environment so overwhelming that it drove directors Werner Herzog, Ruggero Deodato and William Friedkin into a sort of jungle madness that permeates their rainforest films.

I’ve spent the past seven months immersed in writing the Amazon-based horror novel Primeval Waters, giving me an excuse to revisit all of these tropical chillers. My recommendations run the gamut from monster classics to high art as well as some down and dirty sleaze. I even tossed in a family friendly film for good measure.

“A clawing monster from a lost age strikes from the Amazon’s forbidden depths!” Well, the Amazon River looks a lot like Florida, but that’s easily forgiven when a movie’s this much fun. Universal Pictures lured horror director Jack Arnold out of his usual desert locations for this tropical monster classic. It’s the saga of a group of scientists traversing the Amazon to investigate a mysterious fossil, only to encounter an evolutionary throwback they call “The Gill Man.” The lonely Gill Man decides to repopulate his species with Kay, an attractive scientist. The plot may sound like every 1950s monster movie, but Creature stands head and shoulders above them all.

And now things start to get dark.

“Ruggero Deodato has no soul,” claimed actor Richard Kerman in an interview. Many viewers and critics that have experienced Deodato’s ode to cannibalism, rape, violence and animal cruelty would agree. Since its release Cannibal Holocaust has become a lightning rod for both outrage and admiration, but lurking beneath all the shock value is a significant film. It chronicles the search for a group of missing documentary filmmakers. The discovery of their footage reveals their horrendous, but richly deserved, fate. Here are some of the things that make Cannibal Holocaust a revelation. It pioneered the concept of found footage while casting a satirical spotlight on the media’s callous manipulation of reality.

Deodato ignored his producer’s advice to shoot the film in Columbia’s film-friendly Cartagena region, opting instead for the dangerous border town of Leticia. It was an inspired choice, lending the film a dangerous authenticity, enhanced by its grainy, handheld 16 mm cinematography—Deodato’s rainforest is a place where you can, and probably will, die. The cannibals were played by Brazilian natives whose ash-covered bodies and ritual masks feel 100% authentic. Most importantly, Deodato delivers a strong message about civilized man being the true savages. It’s only after being brutalized by heartless filmmakers that the tribe reverts to cannibalism. But, as one might expect, the production succumbed to that jungle madness.

Drug use ran rampant, while the director abused the cast and ignored their personal safety. Cast members objected to the sexual content, particularly the graphic rape scenes. Lead actor Richard Kerman and Deodato ultimately came to blows over the film’s most notorious element—animal cruelty. And this is where things get ugly. All Cannibal Holocaust’s creative merits are overshadowed by its sadistic mistreatment of animals. In interviews Deodato tried to justify this, but it was all just double talk. These scenes add nothing to the film except to prove that Deodato was as callous as his fictional filmmakers. Despite that, it’s still a significant film that gives new meaning to the term “guilty pleasure.”

This was director Eli Roth’s attempt to reignite the cannibal genre. While visually arresting, Inferno swings and misses at Cannibal Holocaust’s political and media commentary. Instead, we get gleeful xenophobia, which was also an undercurrent of Hostel. Director Eli Roth is a well-traveled and intelligent filmmaker with too much talent to become mired in cultural baiting. Thankfully he’s branched out since, to explore new human fears.

“This place makes Cambodia look like Kansas. You lose it here and you’re in a world of hurt.” When Jesse “The Body” Ventura says that, you better listen. Dutch Schafer and his team of commandos take on rebels in the South American rainforest. But their real enemy is an alien on an interstellar safari to bag the galaxy’s most dangerous game… Arnold Schwarzenegger. Predator is one of those rare movies that gets everything right. The beautifully lensed rainforest lends it an otherworldly atmosphere, while the muscle-bound cast gives it a live action comic book feel. Director John McTiernan keeps things moving at a cracking pace, perfectly augmented by Alan Silvestri’s score. Predator is one of the best science fiction action film hybrids, but working in an environment of oppressive heat, venomous snakes and scorpions took its toll. Richard Chavez was attacked by red ants. The director broke his wrist while setting up a shot and Schwarzenegger became so dehydrated that he was acting with an IV in his arm. But the jungle’s deadliest creature was actor Sonny Landham. His violent behavior forced the insurance company to assign a bodyguard to control him. But Landham wasn’t succumbing to jungle madness; from my personal experiences on 1995’s Fatal Choice I can attest that Landham was bat s**t crazy 24/7.

“This river can kill you in a thousand ways,” warns Jon Voight’s slimy snake hunter Paul Sarone. For the next ninety minutes he’s proven right. Anaconda tells the tale of a group of documentary filmmakers navigating the Amazon in search of a lost tribe. Instead, they encounter Sarone, a marooned hunter seeking a huge anaconda. Anaconda is not a great film, but don’t let that stop you from enjoying it. It’s a big-budget creature feature with no aspirations beyond delivering a fun ride. It succeeds, with plenty of great action set pieces and nasty death scenes. The film was actually shot in Rio Negro, Brazil, beautifully showcasing its rainforest backdrop. Some of the 1997 CGI is a bit dicey, but that’s to be expected. Best of all, while the giant anaconda is devouring the cast, Jon Voight is chewing the scenery. Voight hams it up in the way that only a great actor can, at one point literally winking at the camera. He’s the reason people have such fond memories of this campy monster opus. On a related note, here’s my pitch for a horror movie; you’re trapped on the Amazon River in a small boat with Jon Voight … and all he wants to do is talk politics.

And that was part one of Rainforest Horrors. In part 2 we’ll go even deeper into the wilds with directors William Friedkin and Werner Herzog. I can confidently say that it will mark the first time Umberto Lenzi and Luis Buñuel have appeared on the same page, so don’t miss it.

And if you’re hungering for an Amazon Rainforest fear fest check out my novel Primeval Waters, from Severed Press. Available, of course, on Amazon.

Go to Part 2 of “RainForest Horror: A Cinematic Trek in the Green Inferno”