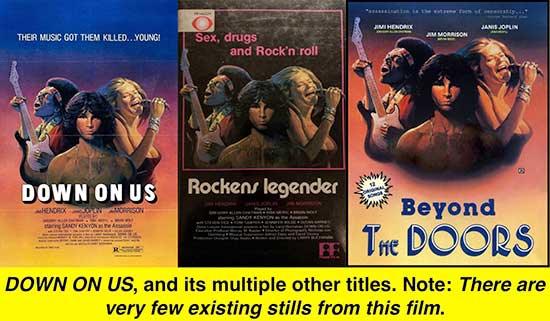 To quote George Bernard Shaw, “Assassination is the sincerest form of flattery.” In director Larry Buchanan’s alternative history drama, a sinister cabal within the US Government plots to kill those three ‘pied pipers of rock and roll,’ Jimi Hendrix, Janis Joplin and Jim Morrison to ensure Nixon’s re-election.

Today I’m reviewing a film, that, prior to YouTube’s existence, was so obscure it was often dismissed as a hoax. But Down on Us is real, and, despite its enormous shortcomings, is worthy of attention. So here we go.

Texas filmmaker Larry Buchanan is best known for a series of low budget science fiction/horror films including Zontar: The Thing From Venus (1967), Creature of Destruction (1968), Attack of the Eye Creatures (1967) and the fantastically titled, Mars Needs Women (1968). If the only thing you accomplish in life is making a film titled Mars Needs Women, you’ve done alright. Most of Buchanan’s micro budget films were bankrolled by American International Pictures to complete a television syndication package. The majority were ‘tear the script cover off,’ remakes of previous AIP films, produced on even lower budgets, but shot in gloriously washed out 16MM color. They all share a delirious, poverty row aesthetic that makes them a joy to watch, as long as you keep a finger hovering over the fast forward button. 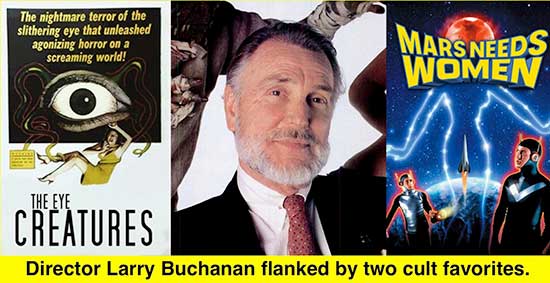 But, over the course of these remakes, Larry accidently invented a new genre I call the ‘Pre-Make.’ He beat Hollywood to the punch multiple times, forging the template for Oliver Stone’s conspiratorial (some might say paranoid) JFK (1991) and The Doors (also 1991). Buchanan may have been Oliver Stone’s shattered, Dollar Store mirror reflection… but he still did it first.

Buchanan’s maiden voyage into alternative history was 1964’s, The Trial of Lee Harvey Oswald. It was the first film to explore various conspiracies about the Kennedy Assassination. Buchanan managed to get Trial into theaters mere months after Oswald was gunned down. Trial has a unique docudrama feel, shot primarily from the jury booth’s perspective. It’s a clever forty-five-minute film that, unfortunately, runs ninety minutes.

His final kick at the conspiracy can was 1989’s Goodnight Sweet Marilyn, exploring an alternative theory about Marilyn Monroe’s death. It’s terrible, but at least his theory is unique.

But in between those two films Buchanan managed to spread his paranoic wings with 1984’s Down on Us. The film postulates that rock stars Jimi Hendrix, Janis Joplin and Jim Morrison were assassinated by the CIA (or FBI) to prevent their messages from reaching America’s youth. As one character says, “Our assignment—neutralize the three pied pipers of rock music.” It’s a perfect elevator pitch for a big budget multi star vehicle with a companion soundtrack album that ships double platinum.

Unfortunately, Buchanan had no Hollywood stars, and was saddled with a laundromat change budget that didn’t run to securing musical rights. But he did it anyway… and that’s why I love him. I didn’t say I love this film, but I admire Buchanan for having the cajones to ignore all business logic and shoot it. It’s the filmmaking equivalent of invading Russia in the winter, and he almost pulls it off before being clotheslined by his own limitations.

The eight-hundred-pound gorilla in the projection booth is the music. Lacking the funds to secure the rights to hits like Purple Haze, Down on Me, or The End, Buchanan hired composers Jeffery Dann and David Shorey to create songs that would evoke those FM staples. This isn’t an uncommon practice. Re-enactment shows like Final 24 do it all the time. My friend was a composer for that series, scoring segments about Sid Vicious and Jim Morrison. According to him, the trick is to capture the essence and get out fast—usually in 30 to 45 seconds. Buchanan accomplishes the first part, while royally screwing the pooch on the second. Rather than parring concert scenes down to their minimum, Buchanan tries to recreate entire performances, allowing his audience ample time to figure out that this isn’t a Doors song, and that high school auditorium stage ain’t Madison Square Garden. This is a strange choice, because the film’s two-hour running time left plenty of room to edit things down… so much room!

It’s a shame, because the sound-alike music isn’t terrible and the actors portraying the 27 Club give it their all. Gregory Allen Chatman certainly resembles Hendrix, and does some fluid air guitar work. Riba Meryl doesn’t quite capture Janis Joplin’s, rode-hard-and-put-away-wet look, but she does a commendable job, lending gravitas to actual Joplin quotes like, “I go out and make love to 25,000 different people and then I go home alone.” Bryan Wolf captures Jim Morrison’s stage mannerisms while delivering some nice metaphysical beat poet dialogue…aka, gibberish. Down on Us was the sole film credit for both Chatman and Wolf, though Riba Meryl played Joplin one more time, on the 1986 sitcom Throb.

You also get a blink and you miss it cameo appearance from Russ Meyer regular Stuart Lancaster (Beneath the Valley of the Ultravixens) as a disgruntled cab driver.

But it’s the two-hour running time that ultimately sabotages the film, allowing viewers too many opportunities to focus on its budgetary and script shortcomings. Clever scenes, such as a drag ball where the transvestite MC lambasts Morrison and Hendrix, a glimpse of J. Edgar Hoover answering the phone in a nightgown, and the infamous Plaster Casters visiting Hendrix are buried under drawn out concert scenes and endless stoned rock star dialogue.

Some might say Buchanan created this film as a cash grab, but onscreen evidence proves otherwise. Unlike the director’s other low budget quickies, Down on Us has a massive cast, with over forty-nine speaking roles. It also features a ton of locations, plus a script that required extensive research. Why do all that extra work if you’re goal is just an exploitation cash grab?

Down on Us was rereleased as Beyond the Doors in the wake of Oliver Stone’s 1991 biopic, The Doors, leading some to believe Buchanan’s film was an Asylum style mock-buster. But he did it first.

Down on Us stands as a fascinating example of a filmmaker ignoring all obstacles, along with common sense, to tell a story he cared about. I have to wonder if it was Buchanan’s ego or his earnestness that kept him from chopping down the interminable running time. Like the mysteries portrayed in this film… we’ll never know. For that reason alone, I recommend watching the film in fifteen-minute chunks on YouTube, while keeping an open mind and empathizing with the director’s sincerity and limitations. The downside is that the YouTube transfer looks like surveillance camera footage, but it’s the best you’ll find. 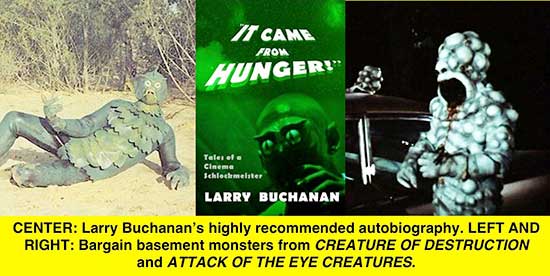 In the course of writing this review, I read Buchanan’s autobiography It Came From Hunger. It’s a fun read, and, if purchased on Kindle, is affordable. Highly recommended.

I also uncovered the real truth behind this film’s production, so buckle up.

In 1982, country music legend and CIA operative, Boxcar Willie, caught a three AM airing of Mars Needs Women. He was horrified to discover that Buchanan’s film blew the lid off the agencies covert Martian/human cross breeding program known as Operation Hot Green Chick. By employing US Army trained remote viewers he telepathically uncovered Buchanan’s belief that major rock stars had been assassinated by the US Government— this revelation would expose their masonic ritual rock star extermination program known as Operation Winter Dance Party. As a false flag, the CIA financed Down On Us through a Panamanian cut out company, fronted by Cuban exiles. The only caveat being that Buchanan’s film must exceed two hours in length and be produced for $60,000 in cash the CIA had culled from the sale of reverse engineered Martian weaponry to Lichtenstein. The agonizing running length and low production values ensured that nobody could sit through it, thereby preventing middle America from discovering the shocking truth. Buchanan, sensing he was being used as a patsy, cleverly embedded all these facts into the song that fake (…or is he?) Jim Morrison sings 29 minutes and 33 seconds into the film. Play it backwards… It’s all there! I’ve said too much, now I’ll have to lay low at Jim Morrison’s apartment in Paris for a while. He runs a bakery now, and his Chouquette is to die for!

Is that any dumber than the paranoid rubbish you’ve seen on Facebook?

For more of my personal delusions, check out my horror novel Primeval Waters, from Severed Press. Like every other product on Earth, it’s available on Amazon.