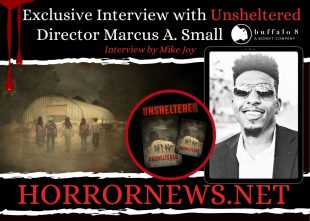 Believe it or not, originally I wanted to be a meteorologist. Yes…I wanted to be the weather man. That was until I actually became one for a day during my senior project in high school. I couldn’t have been more nervous and looked more awkward on camera.

However, I was more intrigued about what was going on behind the camera. That’s when I found my love for tv/film production.

From script–to–screen, how close did UNSHELTERED come to its original vision?

Not close at all. The premise stayed the same, but that was about the only thing that did. Because of time and budget constraints, we were constantly rewriting the script…even during production.

There are always going to be hurdles when making films. That’s just the nature of the game. The key to making this movie was to roll with the punches and to have fun while doing it.

My favorite day on set was probably the third day. That was the day that the cast and I really bonded. On that day, we really had to work together and improvise lines and blocking.

There was just a type of synergy that was present that I can’t really explain. It even trickled down to the crew. We all left set feeling motivated.

There is a scene in the hangar where the students are settling in and joking around. Then all of a sudden…BOOM! Life changed. I felt most connected to that scene.

What is the biggest obstacle you faced while making UNSHELTERED?

A big obstacle was trying to improvise without harming the integrity of the story. Meanwhile, trying to stay within the budget. We shot this whole film in 12 days, plus an additional day for pickups.

However, the BIGGEST obstacle was Audio Post Production. I’m very big on sound design…especially when it comes to horror films. To be totally transparent, we went through 3 or 4 different audio companies before we landed on the one that actually finished the film.

The proudest moment was the during the martini shot. We actually finished the film within the allotted time. We were tired, we were grumpy, but we were wrapped.

Plus, we all bonded during production. Whether it was the cast, crew or anyone else in between, we all did it together.

You just have to find the creativity within yourself. Everyone is different. So showcase your originality and introduce it to the world. Everything else will fall in line.

Will Packer inspires me because his backstory is similar to mine in some ways and he still did the impossible. But to be honest, any filmmaker that I see enjoying what they’re doing inspires me because this is a dream job. There are people who wake up to the alarm on their phones that absolutely hate what they have to walk into for that day. So, I’m grateful to be able to do what I want to do and live how I want to live.

My favorite decade has to be during the 80’s and early 90’s when I was a kid. I was new to the world, so horror moves felt more intense than they do now that I’m older. Hell, ”The Running Man” was a horror movie to me during those days.

The next step is to take everything to the next level. Next level ideas. Next level concepts. Next level budgets. The overall mission in to evolve as a filmmaker and leave the industry better than how I found it.