Exclusive Interview: Author, Christopher Brooks (Throw Me To The Wolves) 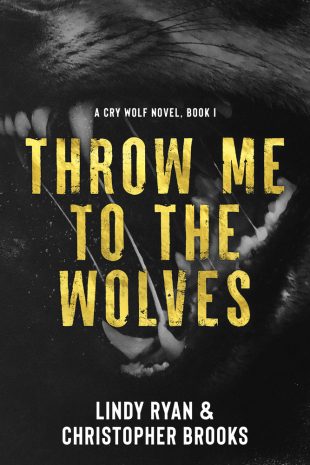 Q&A for THROW ME TO THE WOLVES

What can readers expect from your new book?

CB: We’ve woven something like a procedural mystery with an occult mystery. I love crime stories, murder mysteries. All kinds, from Se7en to Knives Out, polite British murder mysteries to the nastiest amoral stuff. Crime stories require a level of logic that horror plots sometimes throw right out the window. A crime story falls apart if that aspect doesn’t work. Wolves has the cop-adjacent work of solving a crime, hand in hand with the more unanswerable supernatural mystery. In that sense I like to think of the way Catholicism uses the word mystery. All mysteries go back to the question of our existence, which can’t be answered. The characters in Wolves will get closure in some ways, in terms of the crime they show up to solve, and some of what they want as individuals—but they’ll struggle with the bigger questions of what it means and where it leaves them.

CB: I don’t know, maybe five? At seven I wrote a story called “Planet of the Cucamongas,” a word I probably got from a Bugs Bunny cartoon, but did not realize it was an actual place name. I believe the Cucamongas were monsters. I did little picture books about a character called Frankendog, so you imagine, and I published a poem about the Elephant Man at age ten. Monsters helped me flesh out my self-image.

CB: A lot of different impulses flow together, but mostly I just try to figure things out. On the one hand, you ask about life and why people do what they do. But on the other hand, you want to figure out how stories work, or how sentences work. How language works, how our minds react to stories or images or ideas. With Wolves, Lindy had a lot of it already there, so I tried to figure out how to heighten the effect, to engage people or make them react, get them to feel something. The stories she and I are at work on now, it’s the same. The raw idea shows up, then you start to figure out how to make it work—and that work to figure out, and the effort to string words together, can lead to rewarding moments, which punctuate the hours of frustration and depression. I paint to try to figure out how to paint. I’m terrible, but when some little turn that I try almost works, Boom, euphoria. Telling stories works the same way.

CB: Carson McCullers, Heart Is a Lonely Hunter. That woman knew a thing or two about monstrosity. The lens through which she viewed the world had a rock-hard cataract on it, and it made for some great stuff.

CB: To a degree, for sure, but it depends on what drives the story. The character always appears very early on, but sometimes I may just have a glimmer of the character, and then let the plot shape the person. Maybe you land on a great story beat, then have to ask yourself, Who the hell would do that? and then you have to build that person. I can’t really imagine myself creating a fully fleshed character and then saying, Okay, so what happens! I suspect anyone who writes genre stuff has to pay a bit more mind to plot. A lot of characters in Wolves started with people from Lindy’s youth, but then as we worked the material, they changed for the sake of the story. One of the characters that I added to the story came from Lindy’s youth, if that makes any sense.

Do you know your ending when you begin writing?

CB: The end is the hardest and I think most important part, or tied for most important with three other parts. Sometimes I have the end early on, sometimes not. And often if I think I have the end, it changes. That really liberates you. You had this end that you love, maybe it helped get you motivated enough to commit to the story and go, and then at some point a better idea shows up. It feels great. You never change your ending because you came up with an inferior option—you change it because you found a better way to end. So you win. And it makes the whole story new to you. You thought you knew what it was, then bam, different. For me, that’s the closest I come to people who say, I just let my characters tell me the story. I have not personally had that experience. But when the direction I imagined suddenly makes a hard left, that must be how that feels.

CB: Honestly it changes all the time, but with me and Lindy it involves a lot of time behind the wheel. And we don’t do the team deal where one of us writes a chapter, then the other writes a chapter. We draft over each other, we talk on the phone, we rewrite each other’s sentences. Very quickly it becomes hard to tell whose idea was whose, but probably most collaborators do that. But the best trick that I learned from a friend, which I really value, is to overwrite—to write like twenty or thirty percent more than you need, them trim back until you have the best stuff left. Slice out the 20% worst stuff and you make the finished work that much better. And actually, that writer friend had tried to tell me something else, some other trick. I completely misunderstood, but I really like what I wound up with. It’s similar to sculpture, except first you provide your own marble, then trim it away to get the figure.

CB: Maybe a year, but with breaks to work on other jobs. I like to get away from it for a minute, get some distance. If you want to trim away the marble to find the figure, you need that distance, or else it all looks terrible and you whittle it down to haiku, or maybe all looks too good to touch. A couple months away really changes it.

What sets your stories apart of everything else that is out there?

CB: That whole part where we try to trim the fat. Too much of the stuff I read takes a maximalist approach to the prose, maybe inspired in part by the work of Stephen King in the throe of his much-celebrated flabby period. So we go for a kind of leanness. The whole point for me is the supernatural, the weird, those experiences outside humdrum daily existence. Lovecraft talked about cosmic awe, but it gave him a horrible kind of awe, you know, fearsome, and to me even the scariest shit has this real beautiful sense of wonder about it. It’s electric, to experience it, either in real life or in fiction. And for that to work, you gotta keep it grounded. It needs to be recognizably our world, with very limited departures. When authors stack up a rogue’s gallery of supernatural concepts into a single story, I’m lost. I guess because, in my experience, we do have those weird experiences that raise us outside the humdrum, and we have them in this world, not in Disneyworld, not in Narnia. I want to explore this world. We won’t dazzle you with the fantasy of it all, but we’ll make it relatable and real. And most importantly you want to find those moments of humanity that the reader can connect with, and that grounds it more than anything else.

CB: We’ll write the sequel to Wolves, and a very sweet love story spurred by a magic book. Scariest of all, a book that arose from my own experiences behind the wheel of a semi. Lindy and I also love horror anthologies, and we have the editorial experience so we’ve pitched one of those and have begun to circle other anthology ideas. Those will be three very different books, each one will try to do very different thigs. Other ideas simmer, and one of those could very well pull ahead of the three I mentioned.