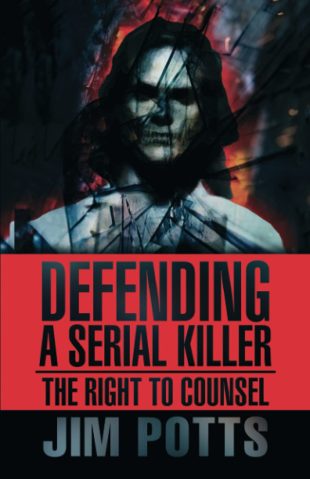 Q&A with Jim Potts, author of Defending a Serial Killer: The Right to Counsel

The Fifth and Sixth Amendments to the Constitution of the United States guarantee the right against self-incrimination, the right to remain silent, and the right to counsel.

A crime wave swept California in the late 1970s. Several young girls were abducted, raped, and murdered. Michael Dee Mattson was convicted of these crimes and sentenced to death.

In 1982, Jim Potts—a brilliant, idealistic, African American law student—is honored when one of his professors recruits him to assist in writing a death penalty appeal on behalf of a serial killer. Potts discovers a loophole in the case that had somehow been overlooked. One that could not only get Mattson off death row, but once presented to the Supreme Court of California, could release him to rape and murder again. When Potts confides in his pregnant wife, she says if Mattson goes free, their marriage is over. But if Potts quits the case, or withholds information, he violates his duty to client and Constitution and risks his career before it even begins.

A moral dilemma with no good way out.

To avoid losing his family and releasing pure evil back into the world, Potts must be smarter than his options. He must find a way to keep his family together, fulfill his duties, and keep Mattson behind bars.

Why did you decide to write this book?

Answer: There were a couple of reasons. There have been a number of high-profile cases that have stirred the emotions of the general public. I am a firm believer that the facts and evidence of any case should be the catalyst of any verdict, not emotions. We have continually seen emotions on the rise, and as a society we have to understand that every defendant, no matter the crime, is deserving of their fair day in court and with the benefit of counsel.

The second reason, and more on the personal side, both Michael Dee Mattson and Pat Dingle (the detective) had passed away. The importance of this, is that I had given my word to Dingle not to divulge certain confidential information he told me that couldn’t be used prior. After his death I was free to write the book unencumbered.

What made you decide to be a lawyer?

Answer: I was raised by parents that encouraged education, especially my mother who came from a background whereby her ancestors had been cheated out of an inheritance left to them by their slave owner in 1872. It took seven years and court action to right the wrong in South Carolina. We attended private schools that also encouraged education, and in that environment lawyers, doctors, and educators seemed to be the path forward. In addition, I was raised when the civil rights movement was emerging, and as an African American, I wanted to know my rights and viewed law school as an obvious choice as a career.

What are the personal positives and negatives that came from this case?

Answer: This case, on the negative side, challenged my personal relationship with my wife at the time. She was against my helping Mattson based on the crimes he had committed. Having to weigh the option of staying committed to Mattson’s appeal and possibly destroying my marriage weighed heavy on my mind until I decided to stay with the appeal. It was the right decision and showed me once again how emotions have to be left out of the judicial process.

On the positive side, I grew professionally because it gave a young law student a great opportunity and insight into the legal profession. I also learned the importance of understanding not only how the judicial system operates, but the constitutional rights afforded to everyone no matter the crime you are accused of.

If “Defending A Serial Killer: The Right to Counsel” answers one single question, or makes one point clear to the public, what would that be?

Answer: That emotions cannot control the judicial system. History has shown that individuals have served time in prison as well have been executed not based on the evidence, but on emotions due to the nature of the crime and possibly the ethnic background of the defendant. This cannot be.

If Michael Dee Mattson or Pat Dingle (choose one or both) could read your book today, what do you think he would say?

Answer: Pat would applaud it. In speaking with him he knew the point I was making about the emotions as applied to the judicial system and he agreed. He acknowledged that he had made some bad decisions based on his resentment of Mattson and the crimes he had committed, but at the time, he wanted Mattson off the streets at any cost.

Mattson would have loved the book because of his ego. To have his deeds put into a book for the world to see would have flattered him.

How did this case change you as a person?

Answer: It made me stronger and helped me to understand the importance of being focused not only in my career but my personal life. I also understood how values can be clouded if we let outside influences deter us from who we are personally or professionally.

I heard you made the preliminary ballot for the Bram Stoker Awards in non-fiction. Was that a surprise?

Answer: A welcome shocker to say the least! It is such an honor from a genre I never thought applied to my book. My focus was on the legal system and the emotions associated with it. After the announcement, I took a closer look to understand how the details of the events by Mattson, a serial killer, thrust me into a world consistent with the Bram Stoker fan base. I am glad I have been so well received by lovers of this genre.

Where can readers purchase “Defending A Serial Killer”?

Answer: “Defending a Serial Killer: The Right to Counsel” can be purchased everywhere books are sold. Signed copies are also available for anyone who wants to reach out to myself or my publisher. vesuvianmedia.com/defending-a-serial-killer-the-right-to-counsel/