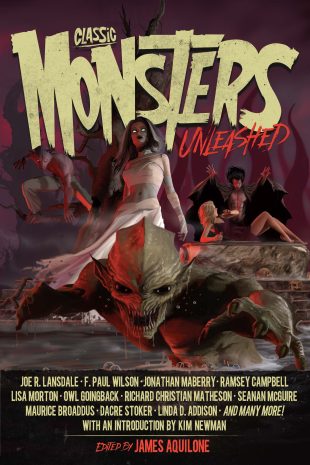 From out of the Golden Age of Horror Cinema and Gothic Literature, comes CLASSIC MONSTERS UNLEASHED [July 12, 2022] an anthology starring Dracula, Frankenstein’s Monster, The Invisible Man, and The Phantom of the Opera, among many other sinister characters. Launched as a Kickstarter project, CLASSIC MONSTERS UNLEASHED quickly became the number one highest funded prose horror anthology on the platform, grossing nearly $60K during its campaign.

CLASSIC MONSTERS UNLEASHED is the first in the Unleashed anthology series. The next installment, Shakespeare Unleashed, is planned for publication in 2023.

James Aquilone is an author and editor from Staten Island, New York. His fantasy/horror series Dead Jack has been optioned for film and TV. His short fiction has been published in such places as Nature’s Futures, The Best of Galaxy’s Edge, Unidentified Funny Objects 4, and Weird Tales Magazine.

CLASSIC MONSTERS UNLEASHED will be released in paperback and hardcover by Black Spot Books. Crystal Lake Publishing will release in ebook. All editions will be available on July 12, 2022.

CRYSTAL LAKE PUBLISHING quickly became one of the world’s leading publishers of Dark Fiction and Horror since its founding in 2012. With over fifty major award wins and nominations, this South African press will always be a beacon of what passion and dedication, combined with overwhelming teamwork and respect, can accomplish. Come join the adventure at www.crystallakepub.com