What Makes a Ghostly Tale Horrifying?
By Alexandrea Weis 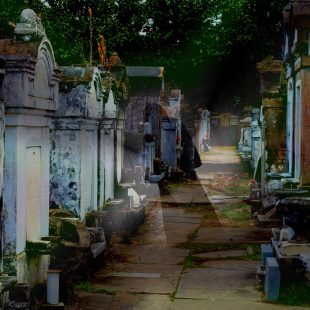 For many, their first introduction to the horror genre isn’t the slasher that hides under the bed or the disturbed boy next door who plays with his collection of rat skeletons. It’s a ghost story. One in five Americans have encountered a spirit, and even more believe they exist. Despite the trend for the progressive internalization of horror—the idea that the monsters originate from within—ghosts remain wildly popular. From reality TV to blockbuster movies, the public can’t get enough of what goes bump in the night.

Our fascination goes back millennia but started in earnest in the Victorian era when the oral tradition of the ghost story entered fiction, the stage, photographs, and living room seances. With the industrialized age, the commercialization of Halloween exploded, and fans of everything macabre demanded grander tales. But there’s more to a good haunting than a mist pacing the living room or a shadow creature appearing next to a family crypt. There are elements to consider, especially when getting the most boo for your buck.

The setting is essential. From apparitions in factories, libraries, bars, apartments, and schools where the ethereal experience happens sets the tone. It doesn’t matter if the plot is gloomy or humorous—the locale can influence the storyline. The unconventional can add flavor and enhance the scare quotient. Familiar locations, like a convenience store or restaurant, frighten faster than those out-of-the-way spots such as abandoned homes and cemeteries in the dead of night. Ghosts associated with everyday places, such as the crying lady in The Dakota in New York, the bride of The Bellamy Bridge in Florida, or the headless skeleton of Deer Island, Mississippi, are the most unsettling.

The backstory is crucial. What drives a haunting can be just as enticing as the haunting itself. Many of the living can empathize with the sorrow, regret, or unrequited love experienced by the dead. Whether it’s tidbits about their gruesome demise or sad life, the mystery behind an apparition can add intrigue to any narration. From the Dead Woman’s crossing in Oklahoma to the Bell Witch of Tennessee and even the saga of the Woodruff family at The Myrtles Plantation, the reason for the dead remaining matters.

How a ghost interacts with the living is another vital part of any spine-tingling yarn. Flying furniture, breaking dishes, and opening doors can make one’s hair stand on end, but a caress, a tug on the shirt, or heaven forbid a scratch can send the most ardent ghosthunter running for the nearest exit. The more communicative the spirit, the more compelling the account. The shrieks of a dying girl at the LaLaurie Mansion in New Orleans, the haunted piano at the Stanley Hotel in Colorado, the sound of gun and cannon fire at Gettysburg Battlefield are just a few examples of chance meetings that resonate with those who witnessed them.

Finally, research is imperative. All those TV shows and movies have created knowledgeable fans. Most have a good understanding of what makes a ghost tick, so sticking with the plausible keeps the plot engaging. That doesn’t mean readers and moviegoers dismiss challenges to traditional viewpoints. Interesting fiction makes audiences think twice about old belief systems and opens eyes to a new way of seeing the world—living or dead.

There’s nothing more addicting, scarier, or satisfying than a perfectly woven ghost story. Long after Jason has put down his blade and Freddy has retired his glove, the lure of something floating through that abandoned graveyard or appearing in the creepy house down the street will keep us gathered around the campfire, eager for another terrifying tale.

BIO: Alexandrea Weis, is a multi-award-winning, international bestselling author, screenwriter, and advanced practice registered nurse who was born and raised in the French Quarter of New Orleans. Having grown up in the motion picture industry as the daughter of a director, she learned to tell stories from a different perspective. Infusing the rich tapestry of her hometown into her novels, she believes that creating vivid characters makes a story moving and memorable.