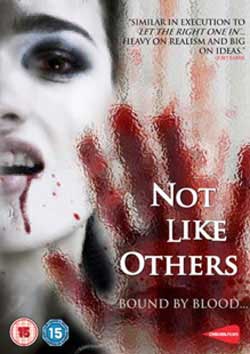 In Not Like Others, Vera and Vanja are a pair of vampire sisters, bloodsucking outcasts struggling to live a secret life in semi-isolation in the bleak suburbs of Stockholm. While hanging out together in one of the city’s dive bar nightclubs, Vera makes the fatal mistake of feeding on and killing the leader of a skinhead biker gang in one of the club’s toilet stalls. When the bodyis discovered by one of the victim’s buddies, the sisters are forced to run into the night, pursued by a gang of ruthless thugs intent on revenge.

During the intimidating ordeal of being hunted, Vanja begins to open up to Vera and reveals her already-rooted but, until now, unspoken plans to give up being an outsider, to try and adjust to the real world and to begin a relationship with a human with whom she believes she has fallen in love. Terrified by the idea of having to live a life of solitude as a vampire without her sister, Vera decides she will do anything to keep Vanja by her side. Meanwhile, the skinhead bikers are closing in…