The thrilling, action-packed The Handler, directed by Michael Matteo Rossi and starring Chris Levine, will be available on Digital & On Demand December 7 from Uncork’d Entertainment.

Ryker is a recently returned to home vet who is struggling for money to take care of his wife and child. He gets in touch with Vinnie, a mob boss, who helps him, but Ryker soon wants out and when Vinnie doesn’t allow it. Ryker purposely throws a job and Vinnie seeks to take Ryker out in any way possible.

The Handler was written and directed by Michael Matteo Rossi (Chase, Misogynist).

The Handler on Digital & On Demand December 7 from Uncork’d Entertainment.

Hi Chris, how are you doing? Thank you for taking the time to do this interview for Horrornews.net. Please tell us how you got involved with The Handler?

Chris- Hi and thanks for having me! The Handler came about when Michael Rossi (Director) gave me a call during the pandemic about this location he had access to and how he’d like to do an homage to his 80’s action movies there. At that time there wasn’t much of a script, more so a story and the idea of where the action should take place. I told him I never really threw a punch before so with the gyms closed too, I’d have to approach it as more of a “Die Hard” over “Rambo” and he was okay with that. So ultimately, we linked up with Matt Erdems (a pro Muay Thai fighter and stunt coordinator on the film) who met me at a local park to do his best to turn me into a fighter in less than 30 days.

What was it like for you working with this incredible cast? All of you did such an amazing job.

Chris- You can’t make a movie like this with an incredible cast! Egos have to leave at the door, you have talented talented actors that would normally have HUGE roles in tv and film yet they were down to just come in to learn a choreographed fight on the spot with me and Matt, do the fight on camera and then leave. It was humbling and because we had multiple fights a day the energy was always high, like who’s next to try to take down Ryker Dune!

What was it like working with the director, Michael?

Chris- Michael is a guy who lives for filmmaking. He’s very easy going on set, open to collaboration yet driven and extremely focused when it’s time to turn the camera on. He was there with me through all of the training and all of the bumps and bruises that happen in this type of action movie and you want that in a director, someone who is going to get down and dirty with you in these types of films… It kept me wanting to push harder to not let him down.

Did you do anything special to prepare for the role of Ryker?

Chris- Yes! We were in a kind of lock down, gyms were closed, no one was working so I was a little out of shape… too many tacos and donuts for sure! So, the minute he said you are our Ryker Dune is the minute I started my diet, added cardio and began my fight training almost every day with Matt Erdems. I only had 30 days or so and with no gym to lift weights, I did my best for the physical side and “look” of the character. I think the biggest thing that helped me was my cardio. I was running a few miles in the morning and then training for an hour every night. We had multiple fights to do in a day and the actors that came in were like you don’t need a rest, you have to do more of these today?? I was of course tired but the training and the diet helped me more than just looking “lean” it also allowed me to do my job every day. 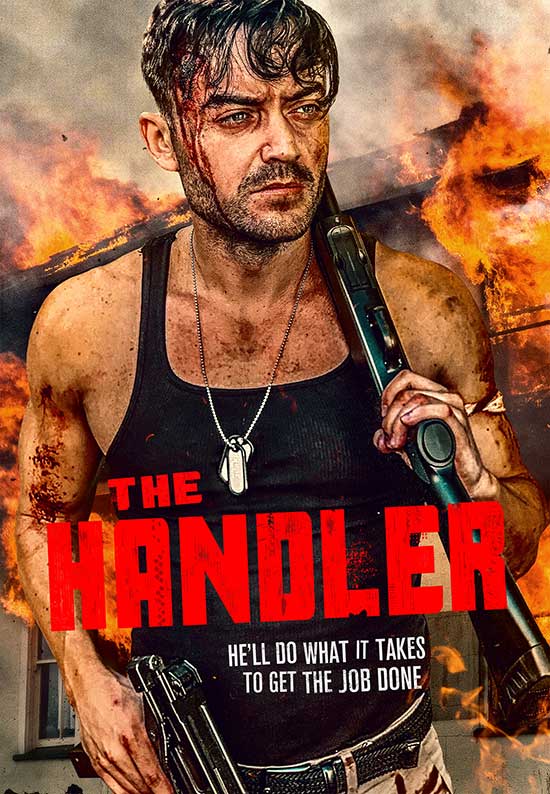 Chris- I have a production company in Alaska so we have 2 movies in post-production, spooky Alaskan thrillers and with another Alaskan team I worked on a film called Bad Bones which I’m extremely excited about as the teaser just dropped for it.

Michael told me not to say anything BUT I’m a rebel and nobody tells Ryker what to do so we are actually in script development for The Handler 2!! We are thinking of making it a prequel, something that shows what he did in the Marines. So, expect combat, guns and explosions but you still obviously have to watch The Handler first!

What do you want to say to everyone that will be watching The Handler?

Chris- I think if you go into knowing it’s not a Marvel budgeted film, that it is a fun and action-packed homage to 80’s/90’s action flicks with fun one liners, really good fight choreography and plenty of deaths you are going to truly enjoy it!

Thank you, Chris. Thank you for taking the time to do this interview.

Chris- Of course! Thank you for having me!