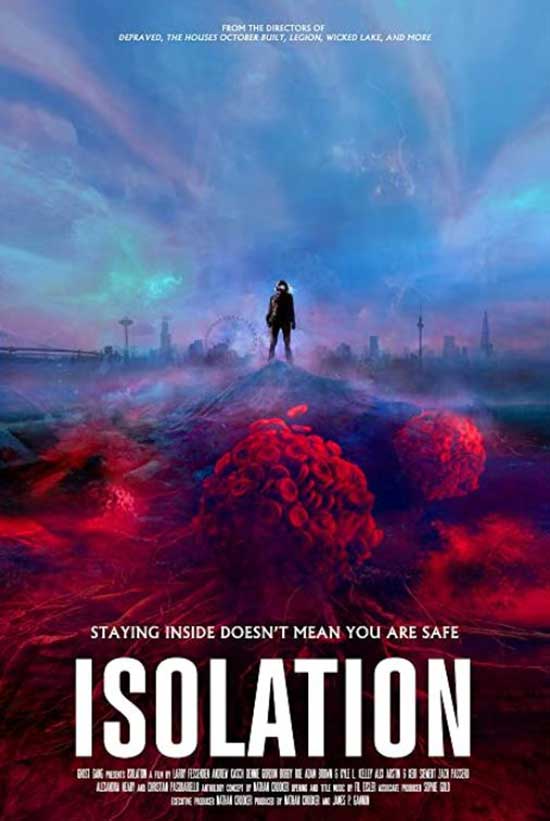 As a narrative framework, Director and Producer, Nathan Crooker created a fictional world many months into the future that is based around the current global pandemic. All eleven filmmakers used the same unifying framework in creating their stories. The filmmakers were tasked with how to stay creative using only what was available to them at the time. They were not allowed to use Zoom or any other video conferencing services and were only allowed to use the equipment and resources they had with them when they entered into lockdown, including cast and crew, adhering to their respective COVID-19 protocols.

Nine tales of terror. I love this, I love anthologies and a beautifully executed film intertwined with each scary tale becoming more terrifying.

The film opens with what could be a virus, it always reminds me of mycelium and how it sort of branches off, yet it’s still together, working and intermingling within a colony. 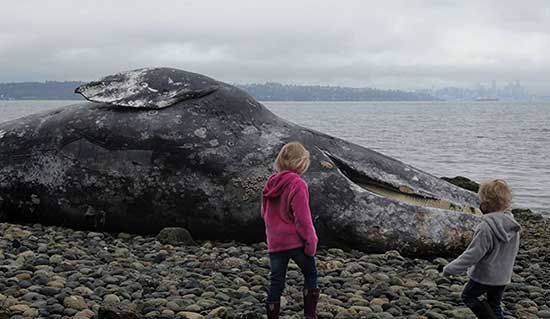 ISOLATION delivers a stark message about a virus that spreads around the globe. It hits supply chains and food shortages. The world is on lockdown, wait a minute, is this a documentary? My soul feels defeated. The virus grows stronger, just as we seem to have a “new variant” delivered every couple of months.

People are living in fear, they are scared, unsure. This is a movie that legit punches you right in the face. No apologies, just POW, “float like a butterfly, sting like a bee” cause the writers of Isolation are going to knock you out!

(I may or many not have had a glass of wine, drink responsibly and don’t drink and drive.)

The first segment starts off in New York. I don’t think I’ve ever heard New York so silent yet also so clear. The sounds still float around but not as loud to some. Larry Fessenden stars in the first segment, “Fever.” He leaves the city with Sam and Karen. Larry’s character is sick and he is telling the story of COVID hitting New York hard. 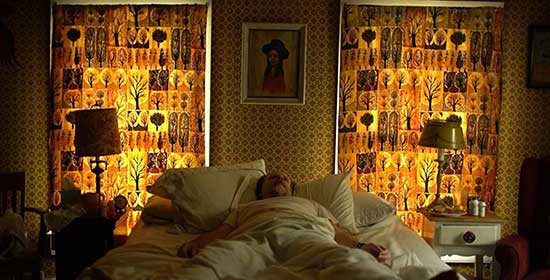 Larry’s character is losing his shit. He’s at the point where he is “trying to protect” his family. It may be a dream or a hallucination but so far, it’s one hell of a story.

I do want to say one thing, I think it should never take a tragedy for people to help one another. The virus continues to the next segment in San Diego, we meet Chad (Graham Denman).

I don’t like watching people walk barefoot, I know, I know, oh gosh, that’s so weird. I always think they’re going to step on something wild.

This is a powerful segment, I feel this is leaning towards more than conspiracy theory, there are people who want answers, they have questions that they won’t get answered. Okay, so Chad (Graham Denman) has an ankle bracelet on and he’s on house arrest.

Chad wants his ankle bracelet off and he takes some drastic measures to get the ankle bracelet off. The conspiracy theories are like, WHOA! Chad asks the questions that so many other people ask. This segment is called, “5G,” I can’t take it. It’s wild.

Damien Gerard is the voice of Chad’s ankle bracelet.

Okay, the virus takes us to Los Angeles, the City of Angels. A man laying in bed, a woman sitting at the edge of the bed, and a cat.

Imagine eleven filmmakers just creating this incredible process of piecing together these stories that fit so well. This segment is psychological. This woman is dealing with death, someone in her home or in her imagination? It takes your breath away.

Another tale to frighten the mind takes place in Seattle. This segment is called, “Pacific Northwest.” A family trying to make it. It’s wild because some of this is happening or has happened already. This segment is making me nervous.

So far all of these are beautifully shot. The cinematography is excellent. I’m not a filmmaker, what do I know? I do know that everything is clear and you get the gist of what kind of tormenting terror they are trying to put out there.

This segment sort of plays a bit into a slasher meets pandemic survival film. (Screaming at the laptop never works.)

Next segment, we have a man microwaving what looks like meat?! I recommend watching ISOLATION. I am trying not to give away too many spoilers because I do think people should watch the film.

This segment is called, “Meat Hands.” I’m not sure what’s happening here? Is this comfort? Did I miss a new trend? Is he a cannibal? Okay, maybe not. This is sad, I feel so many people have been through so much.

The story moves to London. Paige (Alix Austin) is trying to piece together everything that is happening all around the world. Alix is making a video and she says she feels a presence, an unnatural presence. This segment is called, “It’s Inside.” (I’d be HAULING ass and going out of that flat.)

Alix also reveals she has cameras in every single room of her apartment. She also keeps her phone wrapped in aluminum foil. It’s supposed to limit the signal. Each segment fits together and there is another question asked, there is a scarier format. 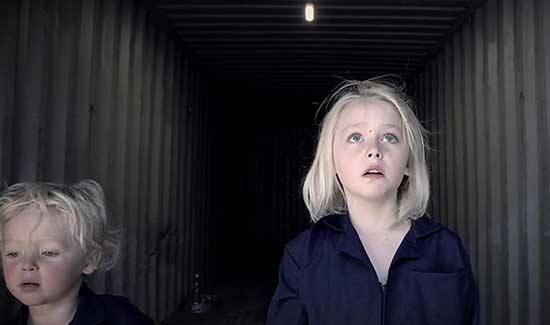 The music makes it more terrifying; this reminds me of the movie, BUG (2006) with Michael Shannon. NOPE! NOPE! NOPE! The teeth scene, NOPE! Whoever created all that, you are amazing but NOPE!

I sort of would like to see some of these as feature-films. The next one takes us to El Paso. The psychological toll has been horrific. Please talk to someone if you need to.

Okay, now they take us to Miami. It has everything, conspiracy theories, new mutations of the virus, the impact of what is happening, the psychological torment. This segment is called, “Homebodies.” Ryan (Alex Weed) is sent out to investigate something for news. His boss wants more news than just empty streets.

I have a feeling this is going to get insane. Nothing yet, do I sense a jump scare?!

ISOLATION is a great scary film to watch with friends, safely of course. I would recommend checking the movie out.

Make sure to check out ISOLATION.