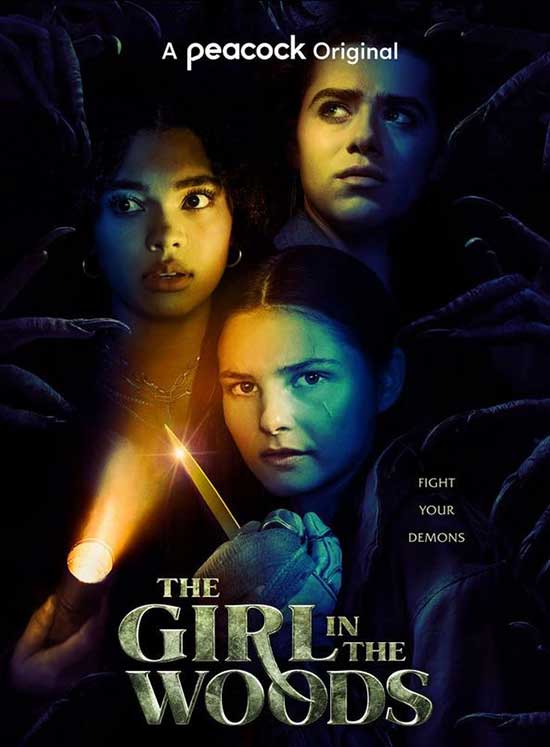 In supernatural drama The Girl in the Woods, monsters are real, kept at bay behind a mysterious door in a cult-like colony. Teenage runaway Carrie’s job is to guard that door, but when strange occurrences begin to shake the sleepy mining town to its core, she must enlist the help of new friends Nolan and Tasha. The group becomes an unlikely trio of monster slayers, determined to save their loved ones. As they fight back, Nolan and Tasha can’t help but wonder… can they really trust Carrie? Small towns can be Hell.

The Girl in the Woods was created by Jacob Chase and Krysten Ritter.

The Girl in the Woods is an 8-episode series from Crypt TV and Peacock.

Episode 101- The Girl in the Woods- The Guardian. What a start to this series. I love Crypt TV, and now Peacock is airing so many great shows. The Birch is another excellent Crypt TV series.

In West Pine, Oregon we meet the Carrie (Stefanie Scott), guardian of the door. She belongs to a colony called The Disciples of the Dawn. She is in all sorts of trouble.

The Girl in the Woods is good so far. Okay, so we meet Tasha (Sofia Bryant) and Nolan (Misha Osherovich). They are social media stars and living life.

Victoria Frisk (Meg McLynn) is Nolan’s mom, and she is having a press conference right outside. Carrie is on the run, there is lot happening in this first episode. I don’t want to give away spoilers. Oh, no we meet Arthur Deane (Will Yun Lee). He is on a mission and Tasha tries to help Carrie.

The cinematography is beautiful. The eeriness and blue tones with dark tones, and the forest sort of interweaves everything. We also meet Lumi Fisk (Lily Jane), she is Nolan’s sister. 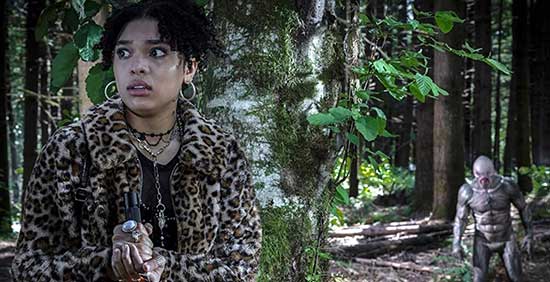 Okay, here comes the Horror 101 of what not to do in real life, don’t pick up candy you find in the woods. Just don’t do it. Be safe out there.

I don’t think Carrie is used to anything, not electronics, alarms, living rooms? Tasha is helping Carrie. Tasha has empathy and she is genuine.

Episode 102- The Door in the Woods, it’s only the second episode in, and it’s getting complicated. This door in the woods is causing all sorts of chaos. Meanwhile, Tasha’s father Alex (Leonard Roberts) is one of my favorite characters so far.

I’m going to binge this series for this review. So, I won’t be giving away spoilers because you should watch The Girl in the Woods. Tasha is confining in Carrie and they are becoming friends.

The show deals with everything from trust, drama, life, social media, family, friends, secrets and the dangers of keeping secrets, the LGBTQ community, looking for safety, trying to be open, and so much more.

Episode 103 – The Lure. I could listen to Will Yun Lee talk all day and night. His voice is calming and I feel like I could meditate. Okay, that’s totally off-topic but I bring this up because he is this community leader/ cult leader, dare I say that?! I said it. I’ve read a lot about cults, communities and what happens.

I also watch a lot of True Crime (Don’t Judge, I feel the judgement. *sighs). Will’s character Artur Deane is someone that people would listen to. He has that charism that people claim David Koresh and Charles Manson had. Did Charles Manson truly have charisma? Cult leaders like Jim Jones, Marshall Applewhite, and Bhagwan Shree Rajneesh made people believe they were doing good.

I realize this is different in many ways, it also matches the times and social media. Krysten Ritter directed this episode. It’s powerful. This cast is doing such a great job playing these characters. 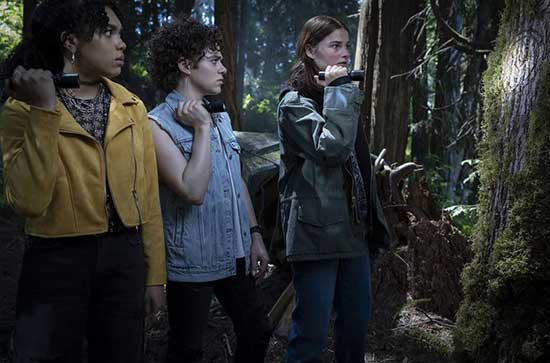 This is definitely a great young adult supernatural series. The Girl in the Woods is a series that you will get into. It has different elements and layers that make it fascinating.

Episode 104 – The Girl in the Woods. Carrie and Tasha are still friends. The episodes get better and better. The cinematography is beautiful. We also learn more about Carrie and how she became part of the Disciples of the Dawn. The Girl in the Woods is a great series. Everything from the cinematography to the special effects, and the creatures are so creepy. So, when is season two coming? 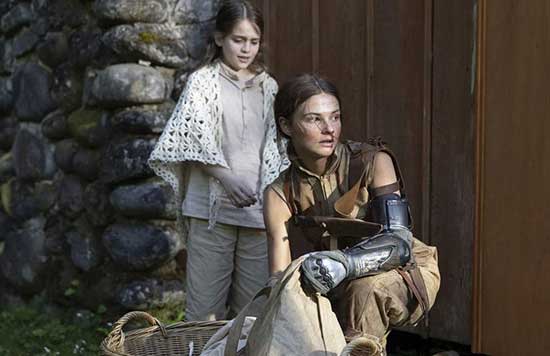 The episodes continue with Episode 105 – One Door Closes, Episode 106- Vast Gehenna, Episode 107- Weapon Against the Shadow, Episode 108- Angel of the Dawn.

Make sure to check out The Girl in the Woods.

THE GIRL IN THE WOODS IS AVAILABLE ON PEACOCK.