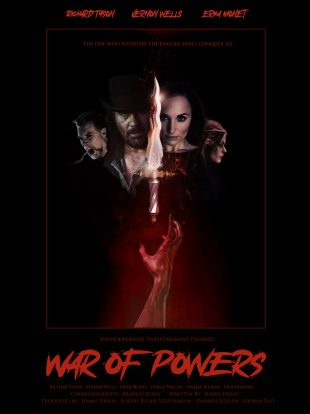 War of Powers is a new television series written and directed by Jimmy Drain and currently in production in Denver, Colorado.

SYNOPSIS : For centuries, men of power have searched for the ‘The Dagger of Destiny’. The same dagger that was used as the tip of the Spear that pierced the side of Christ. A dagger so powerful that Hitler himself commanded armies to find it for world conquest.

Now, the knowledge of its location is in the grasp of gangster, extortionist, and all-around good guy HUGO UMBRA(Tyson) …or so he thinks, Hugo’s only mission now, is to secure intel to find the dagger, the connections to acquire it, and ultimately, to please ‘CYPRESS APHELION(Wells)’.

Cypress Aphelion the tyrannical warlord boss of the diabolical ‘Black Sun’ Mafia, officially knights Hugo as his partner after years of successful and unwavering servitude to him and the ‘Black Sun’.

Now with the future of the ‘Black Sun’ in his hands, Hugo inherits the “Voodoo Show club”…a high-end strip club used to control the city’s most powerful and corrupt. All of whom, feed into the dominion of the ‘Black Sun’ and its quest for the dagger!

To keep a seductive grasp on the city…Hugo and his staff integrate a secret “Speak Easy” VIP lounge into the club. In desperate need of talent, Hugo invites the enchanting “NALUM BRAMLETT”, ( Monet ),who has a voice of gold, into the family…but, as the proverb goes, speak of the devil and she shall appear.

Now Hugo faces the biggest trial of his life. To succumb to Nalum’s lethal seduction or use Nalum’s charms to finally destroy Cypress, find the dagger for himself, and capture the world and everything in it!