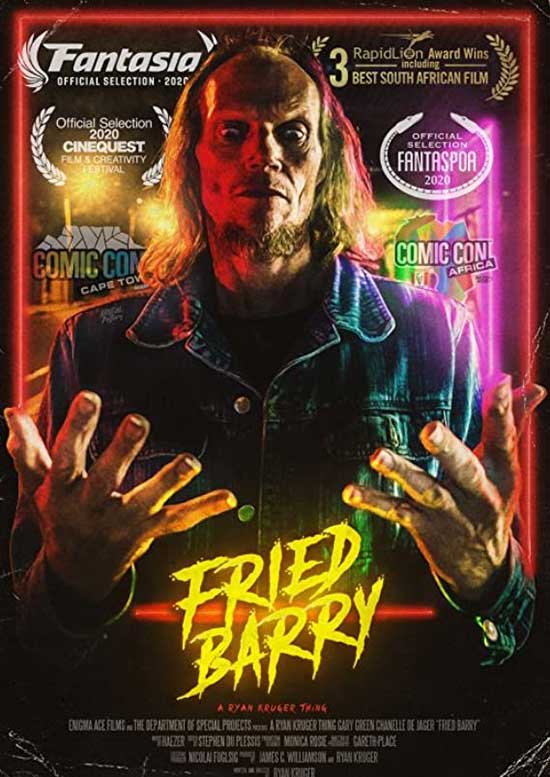 Barry is a drug-addled degenerate who, after yet another bender, get abducted by aliens. Barry takes a backseat as his alien visitor assumes control of his body and takes it for a joyride through Cape Town. What follows is an onslaught of drugs, sex and violence as Barry’s alien tourist enters the weird and wonderful world of humankind.

Life can’t get any weirder… but what do you consider weird? The film opens with the viewer rating warning. Such a cool shot from space to earth.

We meet Barry (Gary Green). Dude is in all sorts of chaos, he goes home to his wife, Suz (Chanelle de Jager) and they’re kid. Suz is sick of the bullshit. In life no matter what kind of crap and chaos you get into, remember kids know a lot more than people give them credit for. Barry leaves and heads to the bar. This isn’t going to go well.

Barry meets up with a friend at the bar. The friend has a lot to say. The poor bartender is going to need a bartender of his own to talk with.

Barry and his friend leave the bar to go shoot up. Barry is abducted while standing on the sidewalk. You can see how different Gary Green is acting as Barry now that he’s been abducted.

Imagine you’re standing on the sidewalk and you just get lifted off the ground and abducted by whatever else is out there in the universe.

I was able to interview the director-writer, Ryan Kruger and he did use practical effects for Fried Barry. The effects, the shots, the colors. Ryan Kruger delivers with Fried Barry. 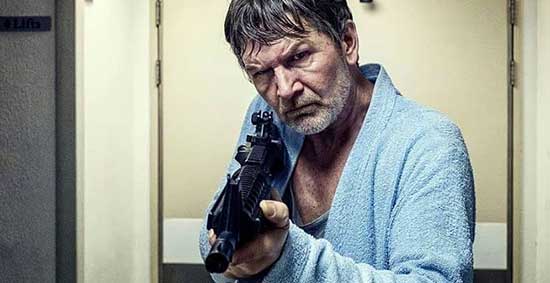 Keep an eye out for Ryan Kruger’s appearance as Danny. Abducted Barry goes out and gets himself into all kinds of things, and has a baby in the process. It’s so wild when you when you think about the universe and what could be out there.

If you haven’t seen Destination Marfa by Andy Stapp, make sure you check that out. It’s a different perspective but for some reason I thought about that film while watching this one.

In the midst of Barry’s chaos, he saves a man. His wife comes looking for him, and she’s upset and worried. Suz really is the heart and soul of this movie. She is trying so hard and being a woman is hard enough.

Barry actually does some of the stuff that Suz has asked him to do. Gary Green is so different in his abducted state. He walks with this bewildered look on his face with nonstop curiosity as to what people are doing.

The look at drugs and what it does to people is also horrible. The paranoia, the will to give up everything you know and love. Even if Barry isn’t truly abducted, his body, mind, soul, and spirit have been taken over by drugs. Compassion and understanding are needed in the world.

It gets crazier, Barry has a lot to deal with. There is a chainsaw fight, lots of blood if you’re looking for blood. The story for Fried Barry is a good one. Barry is locked up with Ronald, it become One Flew Over the Cuckoo’s Nest extraterrestrial version. Ronald is portrayed by Sean Cameron Michael.

Of course, Sean Cameron Michael is ready for battle, even while locked up in a psychiatry unit. This movie is definitely going to be a movie that you come back and watch again. Ryan Kruger did a great job and the cast just brought all the wild with heart and soul.

Make sure to check out FRIED BARRY.