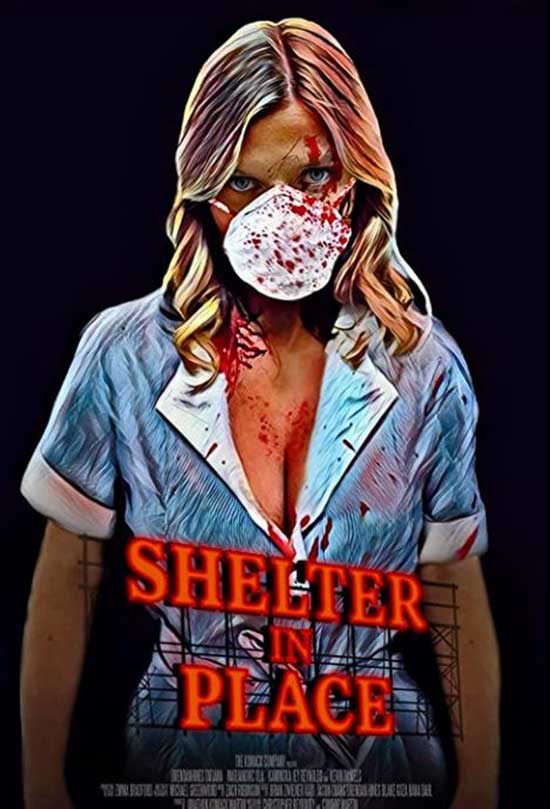 A honeymooning couple gets stranded at the Hollywood Roosevelt Hotel and learns that there is more to fear than just cabin fever.

Directed and written by Chris Beyrooty and Connor Martin, Shelter in Place opens with Robert Caustin (Jey Reynolds) in what seems to be an okay situation until all hell breaks loose within seconds.

Oh, good a pandemic movie. What would I do without one? The best one I’ve seen so far is the short film, New Not Normal by Ryan Oksenberg, check it out. 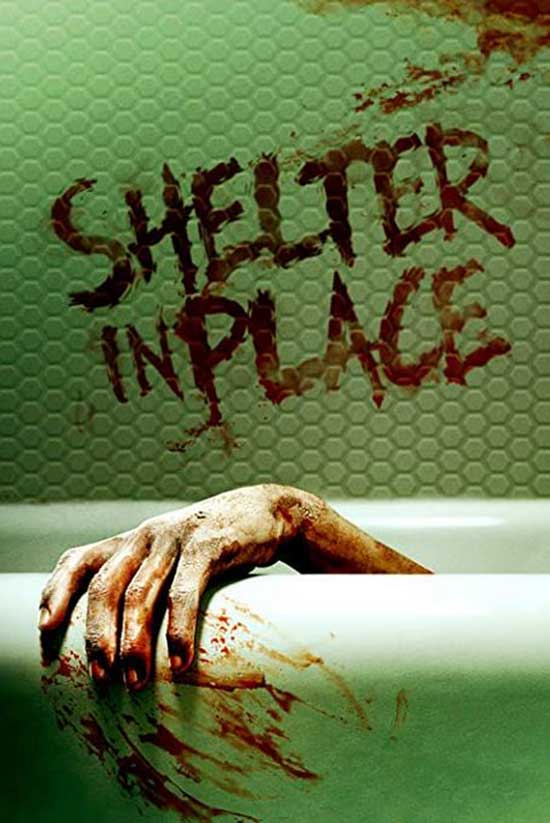 Jey Reynolds plays his character Robert deliciously wicked. Robert is in lockdown at the legendary Hotel Roosevelt, he’s drinking poolside (not what he tells his wife), being slightly douche-ish, flirting with Adela (Ola Kaminska.

Robert finds himself in some deep shit, and he winds up handcuffed to a bed or something. They give us some aerial shots and the news plays as the world has been shut down from COVID-19.

We meet Sara Burke (Tatjana Marjanovic), she is on social media, an influencer or on YouTube? Sara is staying at the Rooselvet Hotel with her husband John. John’s swimming, Sara is updating her social media.

We also meet Ty (Kevin Daniels). He’s in charge of the hotel, and Room 508 has secrets.

Sara and John are on their honeymoon, and in quarantine. Sara hears some strange noises at night, and it’s the next day and she is off looking for a different breakfast, and she finds herself drawn to Room 508. UGH! The creepiness of it all.

Sara is wandering all around the hotel and she winds up at the front desk looking at the registry book. Oh lord, she’s super bored and gets caught being nosy.

2020 was one of the strangest years ever. To hear people, say things like, “it’s the new normal.” It’s wild. It’s wild to imagine this is the world now.

Adela is trying to clean John and Sara’s room while John is in the room. He’s asking all sorts of questions; he helps her make the bed. It’s nice to have a light funny moment. Sara is still wandering around the hotel… Oh, that music sounds ever so slightly like the music from Fright Night II when Charlie (William Ragsdale) is being nosy himself.

Oh, Sara finally went back to her own hotel room, and her husband John went down to the bar for a drink. John and Sara are bowling, and there is a malfunction and something creepy lurking in the background.

This is definitely an emotionally challenging ghost story. John and Sara wind up fighting, and John is poking at Sara’s anxieties. Being married alone can be difficult but being together in quarantine is challenging these two. Sara is roaming around again in search of a snack and it gets weirder and weirder.

Do Ty and Adela even exist? Oh no, don’t go in there Sara. They never listen. Granted, yes, I know it’s a movie, but still come on. What kind of Sinister Malignant demonic ghost nonsense is this! It’s so sad when people tell others to “just relax.” Sara has a moment; Ty helps her out and she tries to tell her husband but he’s not helpful.

Sara discovers a few things and she’s basically and investigator now. She’s trying to figure out if there was someone staying in room 508. We haven’t seen Robert again yet. Okay, right as I type that out… Robert is sort of spotted.

Oh, the things that go in hotels, motels, and you know the rest. Sara is doing some more investigating in her quarantine hotel, and Adela has a secret. Who would imagine so much chaos could ensue at a hotel that’s in quarantine?

It’s The Shining in The Twilight Zone, and oh boy, who ordered for Misery to added in. Adela and Ty are offering up a charcuterie board… nope hold that thought, it’s cheese and crackers.  Ola Kaminska does an amazing job with her character and so does Kevin Daniels. The effects were great too.

Chris Beyrooty and Connor Martin did a great job with this story, and the shots. It’s creepy and the cast does such a good job. The hotel looks amazing, it’s a legendary hotel and it became a prominent character in Shelter in Place. The unknown is always the worst.

Check out SHELTER IN PLACE.