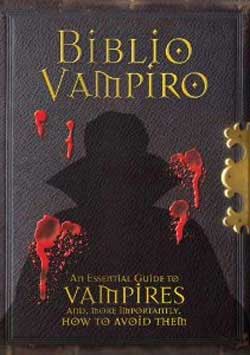 Biblio Vampiro: An Essential Guide to Vampires and, More Importantly, How to Avoid Them

In my opinion one of the coolest things that I’ve seen with the increase in vampire visibility the last few years is the emergence of even cooler looking books published. Content aside, the publishers really go all out with all the visual treats and this edition titled “Biblio Vampiro” is no exception. Sporting a stylized cover reminiscent of old looking diaries, the book contains impressive looking designed pages, a coffin popup and an elastic band that holds all the translated wisdom nicely wrpped until you need to call upon your needy vampire manual.

In addition, it contains alot of picture content both color and black and white, with a variety of clip art illustrations corresponding to the chapters at hand. The book begins simply like most of these, educating the reader with how to recognize a vampire and what to look for. Stuff like …”where do they live”, “what too look for”, “how to find them and how to avoid them” are a few of the chapeter titles featured.

These chapters approach the idea of vampires with a sense of realism even though the genre is more fiction based. Even that issue is approached in a rather unique way by not only pointing out the obvious but also pointing a historical overview of all “types” of vampires in cultures. A few favorites make appearances such as Bathory and Count Vlad, but there are also a few others less publicized in recent editions such as Elga, Mercy Brown and Arnold Paole. Their contribution is not your typical class of vampire and they certainly are not about twinkling and avoiding daylight. They bring a different perspective of entries. Each is well written and provides an encyclopedia style summary. The images included really help the readers to visualize what is being featured.

Vlad as we all know was an early vampire model mortal based but harsh within his era of existence. Bathory sought a classic approach to eternal life through her own psychotic nehavioir of bathing within the blood other others slayed at her own hand. There is a small map and a glossary for newbies who wish to better understand certain terminology. My favorite of the edition was the different “kinds” of vampires. “Energy Vampires” existed to drain ones life force and mirrors the Asian film approach to vampires which is more about a disembodied head flying about than a coffin based ghoul.

The “Scottish vampire” classification could easily fit into alot of other mythology classifications about a man who was executed and came back to terrorize the village. More closer to a ghost, ghoul or phantom, this entity was “Scotland’s” version of local vampire lore. Another entry such as the “Vrykoklas” vampire is actually more of a human with a darker persona and a few odd trademarks. In the description one might associate the vampire in the sense of a bully than of the living dead. This and others provide a solid base of vampire lore. Biblio Vampiro is one more to add to the library with a few new treats that might introduce something new to readers.