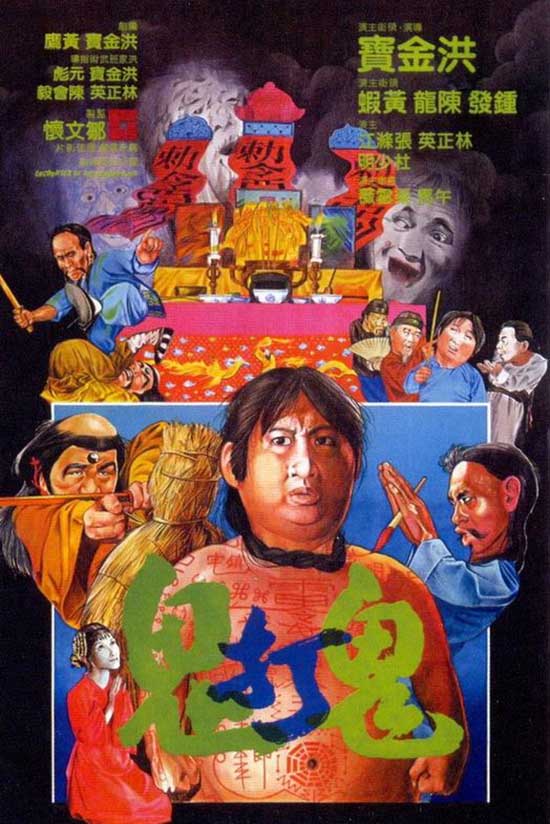 A rickshaw driver’s wife and his rich client are secret lovers, and they decide to get rid of him without being implicated, so they hire a powerful sorcerer to kill him, but the sorcerer’s colleague intervenes to protect him.

I have said it before and will say it again: mixing horror with comedy is a task not all can master. The failed attempts of this genre mashup are too numerous to list and quite honestly, best left forgotten. Once in a while though, someone hits this combination out of the park and when that happens what we often get is a genuine classic. This of course is true of Sammo Hung’s 1980 career defining masterpiece, Encounters of the Spooky Kind (or Ghost Fights Ghost, as the original title translates). It not only successfully mixes horror and comedy but also throws a fair amount of martial arts in the mix, resulting in a fantastically funny and action-packed genre mix that has a little something for everyone.

The story is of rickshaw driver Big Guts Cheung (Sammo Hung himself), whose wife (Suet-Mei Leung) is cheating on him with one of his rich clients, Master Tam (Ha Huang). Worried that the affair will be exposed, Master Tam hires the services of a Mao Shan sorcerer Chin Hoi (Lung Chan) in hopes of getting rid of Cheung once and for all. Soon Cheung is lured into spending a night in an abandoned temple where supernatural horrors await him. Lucky for him, another member of the Mao Shan sect, Priest Tsui (Fat Chung), is aware of his colleague’s evil doings and decides to give Cheung a helping hand. It is by following his advice, Cheung manages to survive the terrors of the temple and the subsequent attempts on his life. Eventually Cheung and Tsui must join forces to defeat the evil forces that haunt him.

Even forty odd years on, it is easy to see why Encounters of the Spooky Kind is considered such a classic. It’s fantastic mix of horror, comedy, and kung fu, will amuse as well as impress in equal measures. I will admit that the horror side of the film is somewhat outdated and as such unlikely to offer any real scares or thrills to modern audiences. That is not to say that that side of the film is in any way badly executed, the craftmanship and forethought is obvious even today and the atmospheric shots of hopping corpses and other ghouls are a joy to see. It is just simply old fashioned. In any case, the real starring aspects of Spooky Encounters are the comedy and action it has to offer. Sammo is incredibly gifted in both, and his stumbling slaps stick buffoonery is brilliantly contrasted by his skills as an acrobat and martial artist. He can somehow go from falling over his own feet to fighting numerous enemies all at the same time in a blink of an eye and make it all look so effortless. A true talent in action.

But it would be wrong to simply label Spooky Encounters as slap sticks horror comedy. Sammo, known for being a studious researcher made sure that the story was as historically and culturally accurate as a story of such outlandish nature could possibly be. For example, the undergarments used by some of the characters are correct for the time period; a seemingly minute detail but something that will help a perceptive viewer put the story at the right place in time. Equally, many of the rituals, including the chants used in them, are genuine Mao Shan rituals that would have taken place in the real world.  The ghouls and ghost seen in the middle of the action are all also bona fide characters from Chinese mythology and not just simply something that the special effects department came up with. The humour used is also not limited to mere buffoonery, but the film is filled with double entendres and other language-based jokes, which offer a much more sophisticated side to the comedy. Unfortunately, many of these little details are lost to Western viewers/non-Cantonese speakers, but they are nevertheless an important part of the film’s success.

For action fans, the wait for the kung fu scenes might be a slightly tedious one. The film does take quite some time to get to the more action-packed segments, but once it does, there is no looking back. The fight scenes with the much-feared hopping vampire are a fun start, but once the film moves on to more lavish action scenes with partially possessed Cheung taking on a horde of bad guys in a classic tea house brawl, or the film’s final showdown with the two Taoist priests battling each other via magic induced kung fu, Sammo’s talents in the martial arts really get to shine. The skilfully choreographed scenes are not only beautifully shot, but also filled with incredibly well-timed physical comedy that will most definitely induce a laugh or two. It is simply marvellous.

Like any film in history, Spooky Encounters is not entirely without problems. The segues between the different acts are not always completely successful, giving the whole story slightly episodic feel and making it come across as little haphazard. There is also some material that has not aged as well as ones might hope. The scenes of animal cruelty and the rather shocking final scene of Cheung beating up his cheating spouse, will undoubtedly raise a few eyebrows amongst modern audiences. Sammo has justified the latter by claiming to be an “equal opportunity fighter”, meaning that he treats all the characters in his films equally, no matter the gender. This explanation could possibly fly if Sammo’s character was fighting an equally skilled martial artist, but as he is simply beating up someone, it does not come across well.  In grand scheme of things these are, however, only small niggles in otherwise brilliant film and should not ruin anyone’s enjoyment of the rest of it.

If you are not overly familiar with Hong Kong horror, Encounters of the Spooky Kind is a solid place to start. It may not be the most gruesome of what HK has to offer but will definitely deliver a fun filled introduction. It is a true gem in the world of crossover cinema, offering horror, comedy and action in equally timeless measures and is sure to satisfy the fans of all three genres.