Gerry Anderson’s, Captain Scarlet and the Mysterons (1967-1968) holds two distinctions. Firstly, it contains some of the most dazzling miniatures and special effects created for television. But it’s also one of the most violent shows to be broadcast before cable loosened the reins of censorship. Oh, did I mention Captain Scarlet was a puppet show for children? It’s a genuinely fascinating oddity.

Captain Scarlet’s central concept was engineered for maximum carnage. In the year 2068 humanity sends its first manned mission to mars. The astronauts encounter the red planet’s disembodied inhabitants, the Mysterons. But the interplanetary meet-n-greet turns into a violent confrontation, leaving Earth embroiled in a war of nerves with the invisible invaders. Humanity’s first line of defense is a hybrid military/police organization known as Spectrum. This may sound like a kid friendly Power Rangers type of show, but we’re talking about the 1960’s, so things got dark very fast.

To survive on Earth the disembodied Mysterons must kill humans, then replicate them ala Invasion of the Body Snatchers. These murders are committed in the most devious ways imaginable, like crushing people in hydraulic lifts or incinerating them. Once duplicated, these Mysteron meat puppets slaughter even more innocents to accomplish their mission. It falls on Spectrum agent, Captain Scarlet, to kill the evil duplicates. Why is Captain Scarlet so qualified? Because he’s the only human that’s been duplicated and survived, embodying him with the power to die and regenerate. That means even the show’s hero dies on a weekly basis, before pulling a messiah style resurrection.

Every episode was a whirlwind of flaming car wrecks, aircraft crashes, exploding buildings and gun battles. If the writers were feeling whimsical, they might toss some spearguns and suicide bombers into the murderous mix. The pilot episode forged the template, packing all of the above into one thirty-minute thrill ride. FYI, that suicide bomber didn’t blow up off camera—it was a full-on Scanners style human firecracker! In a later episode entitled “Avalanche” a Mysteron agent casually asphyxiates three hundred people! Not to be outdone, the memorable, “Attack on Cloud Base” kills off all the show’s major characters, including the titular hero… before revealing that it was all a dream.

When I first saw Captain Scarlet, I thought I was dreaming, because only my twisted children’s imagination could’ve concocted such non-stop mayhem. In addition to Scarlet’s 007 worthy body count, it was also chock full of spaceships, fighter jets and futuristic vehicles. The show’s dark, brooding atmosphere perfectly synched up with my monster kid mentality. In short, it was boy-child heaven.

So how did this Sam Peckinpah goes to puppet land series get made? And who in their right mind would serve it up to children? Captain Scarlet was the brainchild of legendary “Supermarionation” producer Gerry Anderson. His previous series, The Thunderbirds (1965-1967) had honed his production team’s skills in creating miniature models and pyrotechnic effects. But Thunderbirds was upbeat and comedic, with loveable characters like Lady Penelope and her cockney chauffeur Parker.

Captain Scarlet was a dark, pessimistic affair, right from its violent, film noir opening down to its pyrotechnic finales. Anderson assumed that Thunderbirds fans had grown a few years older and were therefore ready for more serious fare. He was right, except those more mature fans usually graduated to live action shows. Despite its being a show constantly in search of an audience Scarlet managed to last two delirious seasons, spawning comic books, newspaper cartoons and a dizzying array of toys. After Scarlet’s cancellation Gerry Anderson borrowed some of its core concepts for his paranoic live action series UFO (1970). In that show alien invaders crossed the galaxy to harvest our organs. Man, Gerry Anderson sure liked things dark.

Aside from its violence, Captain Scarlet was surprisingly progressive. Its cast of puppet characters was more integrated than Star Trek, which, a year earlier, had stretched racial and gender boundaries. Scarlet even featured a group of ethnically diverse female jet pilots—all combat aces, ready, willing, and able to blast the hell out of anything. This was pretty iconoclastic during the chauvinistic sixties. In another radical concept, the war between Earth and the Mysterons was entirely humanity’s fault, brought on by trigger-happy xenophobia. In another moral gray area, the good guys sometimes lost, often through their own ignorance or arrogance.

These elements were all part of Gerry Anderson’s genius. While most producers of children’s television condescended to their youthful audience, Anderson offered them a truncated movie experience, packed with all the dramatic elements of adult fare. While the storylines were streamlined to accommodate kids, they were never dumbed down. As a child I genuinely appreciated this.

Visually, Captain Scarlet is stunning, with fantastically detailed miniature sets created by Derek Meddings, who went on to win an Oscar for Superman (1978) as well as working on a plethora of Bond films. His artistry wasn’t limited to futuristic vehicles and spaceships. In the episode “Inferno” his team crafted an Aztec temple worthy of an Indiana Jones film—only to blow it up in the finale. That was the other great thing about Captain Scarlet—everything got blown up, people included! 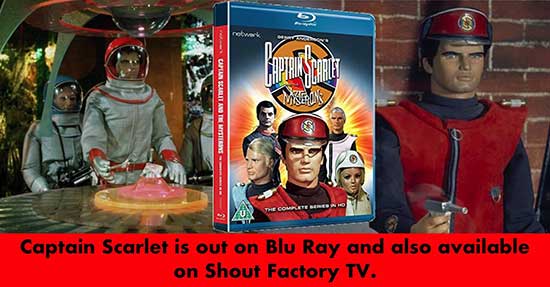 Captain Scarlet and the Mysterons is well worth viewing for its sheer entertainment value as well as its being a cultural time capsule. In its restored version viewers can finally appreciate special effects ace Derek Meddings’s amazing attention to detail—It’s the toy box you always dreamed of. You can find it on Blu Ray or watch episodes on Shout Factory TV.

And, when you’re not feasting on puppet carnage you should check out my new novel PRIMEVAL WATERS from Severed Press—it’s an Amazon River hell cruise, teeming with prehistoric nightmares, modern pirates, ancient aliens, and ageless mysticism, and there’s enough mayhem to make Gerry Anderson smile. You can find it on Amazon.