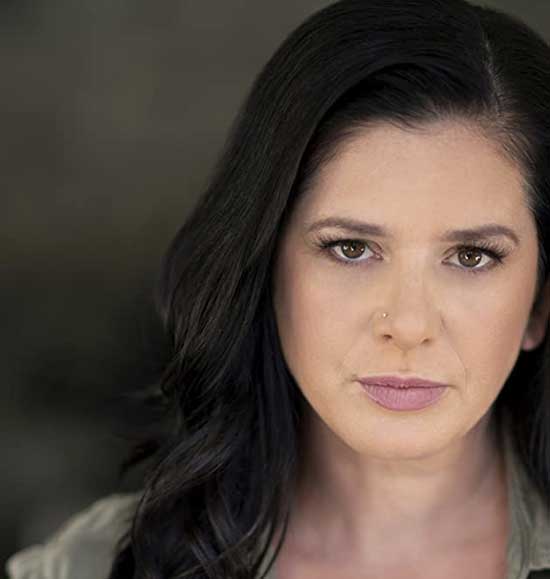 Director Lisa Ovies is so talented. She directed Witches Midnight which was part of Panic Fest 2021. Lisa took time to talk with Horrornews.net about her film Puppet Killer and so much more.

Puppet Killer will be in theatres in the US on September 21st. It will be for a limited run.

Hi Lisa, I’m so happy to talk to you. I know COVID has been so weird. It’s been horrible for so many people. I think movies and anything that you can do creatively has taken your mind off of stuff, it’s been cathartic. So, thank you for making amazing films.

Lisa- I agree, for me, it’s been a nice thing to focus on in the evenings. 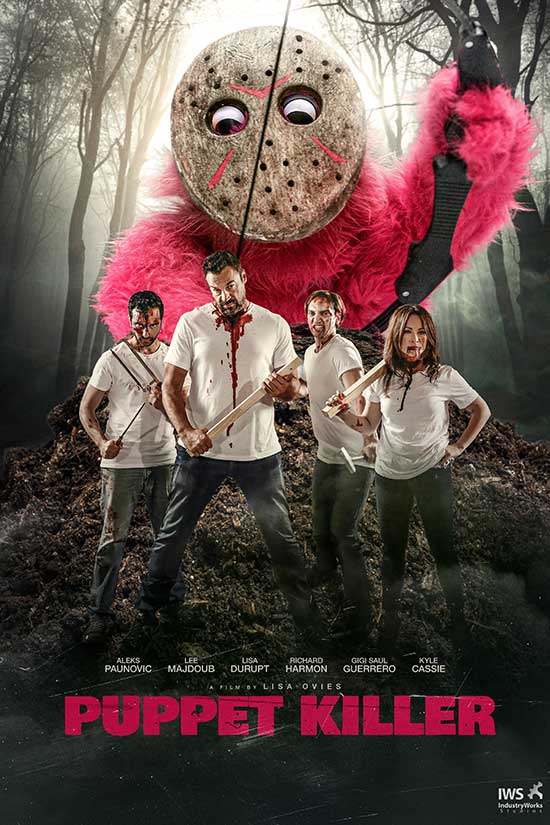 I was so excited for Witches Midnight, and Panic Fest 2021. I’m so excited for Puppet Killer.  You are ridiculously talented and your work inspires me.

Lisa- I want to thank you for that. It was a rough year. It was an incredibly hard thing to do. I was incredibly honored to be a part of Panic Fest. Women should be holding each other up and supportive.

I agree. I really enjoyed this movie. Beverly and Alex were so funny together. How did you get involved with Witches Midnight?

Lisa- Thank you. Honestly, I was proud of Witches Midnight. I didn’t know how it would be received, and I don’t have a lot of experience with shorts.  I didn’t write it (It was written by Oswald Mahogany and Jessica Pontes) There was a lot of things that I had insecurities about. I was blown away with these talented humans, I’m so lucky that Beverly Elliott and Alec Gillis signed on to do this.

Is it challenging doing everything? I also love Kevin Mosley’s work. You directed Witches Midnight but you co-wrote, directed, and produced Puppet Killer. I think the more you know, you are better off but maybe it can be overwhelming?

Lisa- I think it’s a great question and there is no right answer because every situation will bring up unique challenges. I didn’t write Witches Midnight; I was not a writer at all. I did end up producing because I am a bit of a micro-manager, and I knew that I could cast it myself. I knew I could get the prosthetics built so, I got to design that creature myself. I’m so grateful and almost surprised that we pulled it off. I think I was a great candidate because I can do everything. I know that I’m great with script editing, you mentioned Kevin Mosley. Kevin and I work so well together. We are working on another feature right now. I look back at my experience making Puppet Killer, and it was one of the most stressful experiences of my life. I’m so grateful, almost surprised that we pulled it off to the caliber we did. It was such a hard experience. I was balancing so many things and trying to be creative.

What would you say to the horror fans? The horror community or just horror fans are always super loyal and kind. It feels safe.

Lisa- I think it is a safe place. I think the horror community is fantastic. I’m as much of a fan as they are. I like our fan bases and that we all can meet each other at a convention and talk.

I was so baffled when I found out that Beverly Elliot and Alec Gillis weren’t talking to each other. When you told me that during Panic Fest 2021, I was mind blown. I think I was so interested in your work too because you speak your mind and I got so tired of not being able to always speak my mind.

Lisa- I love that, I will say this because I think it’s important. One of the reasons a lot of women migrate towards me because I do speak my mind. There is negativity that comes with it too, and I want to make sure people know that. I would never stop speaking my truth. I’m also forty-one, almost forty-two and I’ve got no more shits to give, like NONE left. I’ve had people try and destroy my career and I’m still here. I learned that there are some good humans out there. I want to thank you for that. As far as the question with the performances, I got the script and we did some rewrites back and forth. Once I cast them, I know them both well. Beverly is amazing. She is an incredibly accomplished actor. I immediately thought of Beverly. Alec and I had been friends and Alec’s sense of humor is amazing. We did a table read and we had our producers in Toronto. On the day of filming, they both had two phones. The phones that they were looking at were the production phones. They were just staring at their own faces; they could still hear each other. Alec isn’t even an actor and he is still good. Alec is a creature designer.

It was just fascinating because I thought they were talking to each other. MIND-BLOWN! Beverly is just so funny too. I think people forget that life is funny and just because it’s a horror movie there can be funny moments.

Lisa- I agree. I think it’s a human, you know it’s a human element that does some times get neglected. It’s important to bring humanity into any scene. I love comedy and my training and my background is in comedy. I have been told that horror-comedy cannot be successful so, I kind of like to infuse it when I can in my own stubborn way. I would love for that to be what I’m known for, oh, Lisa directed this? This is going to be funny.

How did you get all of the practical effects figured out for Puppet Killer?

Lisa- A lot of its happy accidents or forced changes. Kevin and I worked on the script, and at one point we we’re shooting in a studio. Out practical effects guy at the time wound up finding this location. We went to look at it and it was flipping perfect, it was unbelievable. It had a cheerful basement and the guy left us repaint everything. There was a hot tub and I was like, fuck that, I have to kill someone in this hot tub [for the film]. [laughing]. Puppet Killer happened because Kevin Mosley is amazing, and we adapted the practical effects.

My background in improv was invaluable in the sense that I was able to be flexible and not get flustered, and know that there would be solutions. We had a puppet consultant, her name is Mauri Bernstein, and she was a puppeteer on Team America. She is a bad ass. We couldn’t afford her for the shoot but she came in as a puppet consultant, she walked us through some stuff, and then on the day of the shoot it was full-on creativity. The actors were super flexible and patient. Witches Midnight, we were in lockdown, and the actress that I cast as the creature was in a bubble with a woman who had just had a baby. It was perfect, the woman had a nursery. It was the first time I was given the freedom to design my own creature. I was over the moon.

The monitor scene in Witches Midnight is creepy. It’s crazy all of the stuff you learn and how you piece everything together.

Lisa- Thank you. It was crazy. All of the stuff with Beverly was shot in Beverly’s house. The nursery is in a completely different house with me operating the camera.

What advice or words of wisdom would you offer to anyone who may be hesitant or scared to move forward, and just make a film?

Lisa- I think you just have to not fucking care. That’s easier said than done. I can’t say I don’t get a little bit hurt when something you love is put out into the world. You need to be open and honest with yourself. People can be so nasty; you just have to have thick skin and say that’s okay. If someone doesn’t like your film, that’s okay. 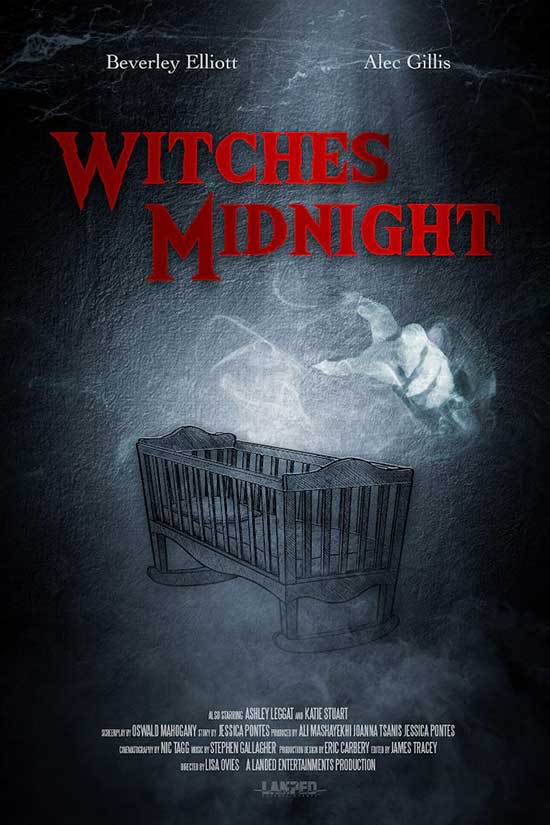 That’s true though. It takes a lot of work and I think that people don’t always realize how much work it is. I’m glad that you are out here making films.

Lisa- I recently signed with a management team and I’m over the moon. I’ve got four features and two shorts. Puppet Killer will be released this year.

I thank you so much for taking the time to talk to me. It’s been an honor. You are just so awesome. I’m so excited for Puppet Killer. Thank you, Lisa.

Lisa- I thank you and I appreciate your time. I had a wonderful time talking to you.