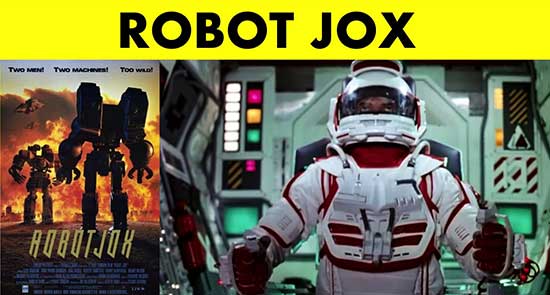 In a post nuclear holocaust world the global powers have outlawed war. In its place, disputes between the two major powers, The Market and The Confederation, are settled in trial by combat bouts between giant robot fighting machines. The champions piloting these machines are known as Robot Jox. After a tragic accident The Market’s greatest Robot Jox, Achilles, chooses to retire, forcing the Market to find a new champion for a globally important rematch.

The name Charles Band inspires equal parts adoration and derision from genre fans. Legions of VHS era film buffs have fond memories of his Puppetmaster and Sub Species films, while the opposing camp sees his prolific output as a downward spiral. Band doesn’t exactly make being one of his cheerleaders easy, because for every pearl like Reanimator (1985), From Beyond (1986), or Head of the Family (1996), he released five swine like End of the World (1977), Gingerdead Man (2005) or Ghoulies Go to College (1990). Oh, Charles Band, if I didn’t love you, I’d hate you.

Director Stuart Gordon’s Robot Jox is among those pearls. Band acted as executive producer on what should have become the blueprint for his Empire International Pictures—namely producing modestly budgeted genre films with a lot of heart, fast-paced scripts and plenty of action. Despite its tight budget Robot Jox looks like an A picture, thanks in part to having full run of Rome’s Dino de Laurentiis Cinematografica Studio. Band had purchased the storied facility, renaming it Empire Studios. Yup, at this point Band was going full mogul, until overextension, underfunding and a changing market derailed his ascent to becoming the next New Line Cinema. Robot Jox, along with the same year’s Arena and Catacombs were seized by Crédit Lyonnais as part of Empire’s bankruptcy. That’s one of the reasons the film has been so difficult to see—but so worth the effort.

Robot Jox displays Stuart Gordon’s (Reanimator) trademark wit, and strong characters, aided by a pared to the bone screenplay by novelist Joe Haldeman (The Forever War). I think this is a more fully realized and nuanced film than Gordon’s Dolls (1987), which received wider distribution. That’s not a slight against Dolls, which I quite enjoyed.

Robot Jox up-and-coming cast is strong across the board. TV stalwart Gary Graham (Alien Nation TV series) plays Achilles, looking like a leading man who’s been rode hard and put away wet. He clearly understands Gordon’s tone, lending Achilles just the right combination of bravado and self-deprecation. Perennial good-ole-boy Michael Alldredge (Scarface, 1983) is clearly having a ball playing Achille’s trainer, Tex. But the film’s real lynchpin is Anne Marie Johnson (In Living Color TV series 93-95) as Athena, one of the genetically engineered Robot Jox trainees, disparagingly known as “Tubies.” It’s a crucial role and, thankfully, Johnson is right on the money. Her dialogue about studying Achilles body, but finding ‘nothing special’ hits all the right notes. One of the joys of Stuart Gordon’s films are the great character moments he allows his cast. Johnson and Graham display a genuine chemistry that makes their unlikely transition from rivals to lovers more plausible.

The only weak character is Alexander, the Confederation’s (basically the Soviet Union) top robot warrior, played by Paul Koslo (Voyage of the Damned, 1976). In Koslo’s defense, the villainous role was written like Rocky IV’s Ivan Drago, with all the subtlety of a flying hammer and sickle. Koslo was a talented actor and a favorite of Charles Bronson, who cast him as a villain in Mr. Majestyk (1974) and The Stone Killer (1973). Allowing Koslo to give Alexander a single redeeming trait would have made the film’s climax more effective. Writer Joe Haldeman had a deep disdain for Soviet communism, which may have influenced Alexander’s over the top maliciousness.

I keep mentioning the film’s modest budget. Band claimed it was in the area of $10 million, but Stuart Gordon gave a more realistic figure of $6.5 million—very tight for a grandiose science fiction project. In comparison to other 1989 fare, The Abyss knock off Leviathan cost $25 million, and even Police Academy 6: City Under Siege had more than double Robot Jox’s budget at $15 million… and look how great that turned out!

Robot Jox costume designers Kathie Clark and Gloria Musetta deserve praise, not only for creating the great Robot Jox fighting spacesuits, but also for designing futuristic civilian clothing that still holds up. This movie must have set some kind of record for sheer volume of jumpsuits.

Director of Photography Mac Ahlberg gives everything more polish than the budget should have allowed. I was especially taken with the scenes of Achilles boarding his robot. The endless elevators and gantry ways evoke memories of Philip Kaufman’s The Right Stuff (1983) lending those scenes authenticity.

If I have any criticism of Robot Jox it would be Gordon and Haldeman’s lack of world building. In their haste to keep the story chugging along they never offer any background on the genetically engineered “Tubies.” Were they born as adults, ready to be trained, or raised from childhood by the state? And why can’t Achilles read? And what is his brother’s job in the ‘reading business?’ Just a little bit of detail would have gone a long way to shading the film’s futuristic world. With a running time just shy of ninety minutes there was room for some exposition.

Robot Jox has a checkered release history, which is why it took me a few decades to see it. Due to bankruptcy litigations, Robot Jox zipped in and out of theaters, came and suddenly vanished on VHS and rarely emerged on DVD. I don’t think it’s even on Band’s Full Moon streaming channel—though you can binge watch all nineteen Evil Bong films, if that gives you a buzz.

The film’s two stars both went on to good things. Graham landed the role created by James Caan in the television version of Alien Nation and the show’s MOW follow ups. Anne Marie Johnson is the very definition of a working actor, becoming one of In Living Color’s repertory company before going on to play dozens of reoccurring characters on shows like NCIS. She was the first African American woman to serve as VP of the Screen Actors Guild as well as being a dedicated social activist. Recent television appearances show that she’s aged one year for every decade since Robot Jox.

Charles Band went back to the robot well, directing Crash and Burn (1990) and producing Robot Wars (1993), helmed by his father Albert Band. Due to lower budgets, David Allen’s effects were trimmed to near cameos. Both films lacked the sharp screenplay and quirky charm of Robot Jox, placing them in Band’s lackluster category alongside 1987’s Cellar Dweller, but not in the subbasement with Gingerdead Man (2005).

There’s no doubt that Robot Jox influenced blockbusters like 2013’s Pacific Rim. But, for my money, Stuart Gordon’s film has a scrappy, handmade charm that sets it apart. And, at a mere hour and twenty-four minutes, it zips by. Am I the only one that thinks two plus hours is a bit too long for a giant robot/monster movie?

Check out Robot Jox—you won’t be disappointed. Amazon even offers a stress reducing adult coloring book based on the film. And, if you really want to get your “mech” on, I suggest watching it on a double bill with 1989’s Gunhed.

Until next time… “Crash and burn!” That’s a line from the movie, not to be confused with the actual movie entitled Crash and Burn. I hope readers will hit the comments section to share their favorite Charles Band memories—maybe there’s something great that I’ve missed.

Much like movie maestro Charles Band, I’m a shameless self-promotor. So, if you’re in the mood for oversized monsters wreaking havoc check out my new novel Primeval Waters from Severed Press. It’s an Amazon River hell cruise teeming with prehistoric monsters, modern pirates and ageless mysticism… and there’s cannibals too! It is, of course, on Amazon in paperback or Kindle.