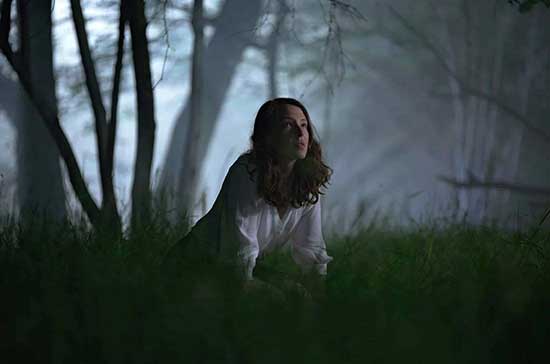 Filmed in Welsh, the picture follows a young woman serving privileged guests at a dinner party in a remote house in rural Wales. The assembled guests do not realize they are about to eat their last supper.

Always be cautious whose house you are entering when starting up a new job. However, perhaps you should be even more vigilant if you are the family welcoming this new worker into your own home. Discover what occurs in UK’s “The Feast” which made its Canadian premiere at Fantasia Festival.

A rich politician’s family is having guests over for a 3-course meal with a lucrative deal about to be proposed in order to mine in a local forest. Their usual helper cannot make it in, so they hire a new one, Cadi (Annes Elwy), to ensure that no detail is missed and no luxurious meal is spared. The family, made up of the mother, father and their two adult sons, are either obnoxious, eccentric, or misunderstood. Some of them are even all of the above. Each of their presences make Cadi feel, at times, somewhat uneasy and uncomfortable, but she settles in. She barely speaks a word; rarely flinches at anything said or done. The ironic thing is: she is not the one who should be intimidated by them, but rather they should be fearing her being altogether. The sumptuous meal that was meticulously prepared may not be the only things consumed during this night. 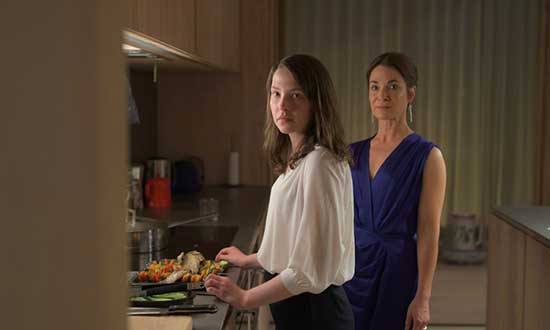 In the very first scene, director Lee Haven Jones, in his feature film directorial debut, serenades the audience with some beautiful opera music while peculiar characters, doing peculiar things, are presented onscreen. The first scene where Cadi is present, it is clear that she is a reserved, timid, and seemingly socially awkward young woman, but when comparing her to the rather repulsively arrogant and pretentious family for whom she is working for, each giving off a different, bizarre vibe, sympathy will rapidly be thrown her way. No actor, by the way, from one of the lead roles to one of the invited guests, seems out of place in the film. Nicola Reynolds, in charge of casting, reunited a sublime collection of actors who portray each of their characters to perfection; each in their own reprehensible way. To be fair, one of the two sons doesn’t seem to quite fit into the family’s grandiose mold; although he does struggle with his own demons. 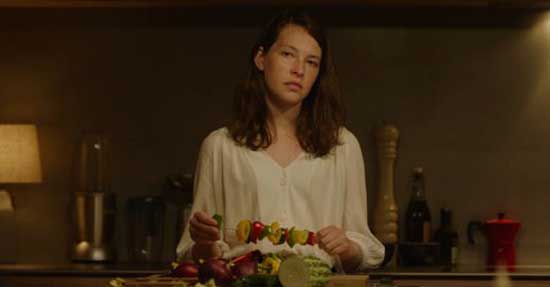 Sound effects seems to be an aspect of the film that is underlined and highlighted by the director. Common items and actions seem to have their volumes cranked incredibly high and it remains vague as to why there is such an emphasis placed on how loud these sound effects are. Director Jones also decides to separate segments of his film into titles with short, ominous sentences (which seems to have coincidentally become a trend throughout this year’s Fantasia Festival), where each title becomes a part of the eventual dialogue to come. “The Feast”, as it progresses, gives off somewhat similar vibes to the excellent “The Invitation” (which was also presented at Fantasia in 2015). Its bizarre, building tension forces the viewers to know that something is wrong or a terrible event is slowly building in a crescendo, but they just can’t quite put their finger on it as to what it is, exactly.

Sadly, the film does have its flaws, despite an incredibly oppressing atmosphere and phenomenal acting. A lull seems to stretch out in the storyline’s development as the hosts await their guests, hindering the film’s tension, for some time. The revealing final act, without giving anything away, although appealing to the eye, remains somewhat vague and open to interpretation. Some viewers may come away frustrated with the ending that leaves little to no definitive explanation.

“The Feast” is an eco-horror movie, filmed in its original language of Welsh, that touches on environmental criticism and what consequences could arise from man’s carelessness. It certainly has a sleek style of directing, an uncomfortable atmosphere and impressive cast, but its growing uneasiness is, at times, halted by its own scenario, in addition to an eyebrow-raising and open-ended conclusion. Lee Haven Jones’ horror directorial debut nonetheless receives the passing grade of 6/10.