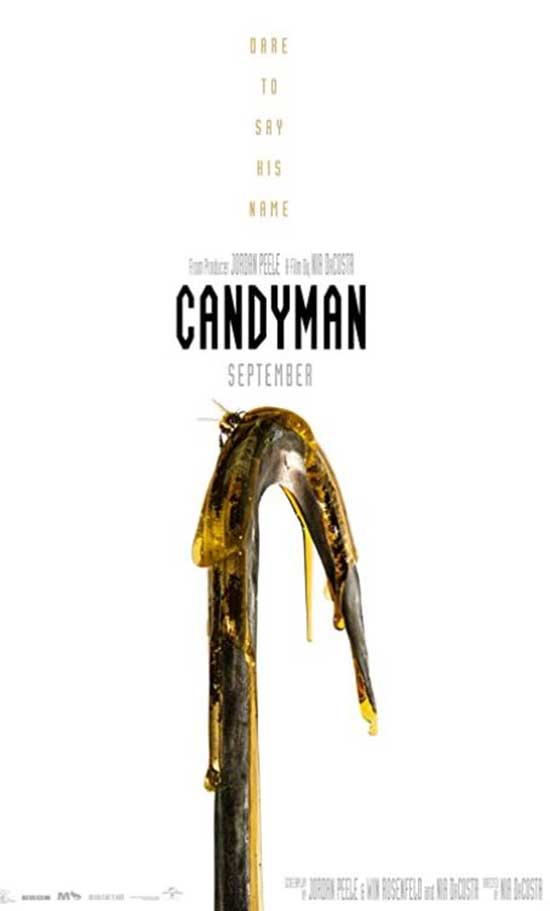 “A “spiritual sequel” to the horror film Candyman (1994) that returns to the now-gentrified Chicago neighborhood where the legend began.

We decided to make up and go see the movie in the theatre. COVID and life in general is stressful enough. I do want to say, I hope we get another Candyman movie. A prequel or sequel based on Daniel’s life. Based on more than just we they tell us in both films.

Clive Barker wrote a short story called, “The Forbidden” and it inspired Candyman. A terrifying urban legend that is so much more. Candyman (1992) was about humanity and social injustices in many ways. Candyman (2021) looks at the lack of humanity. The accusations, the insanity of a man or is he truly making this transformation. 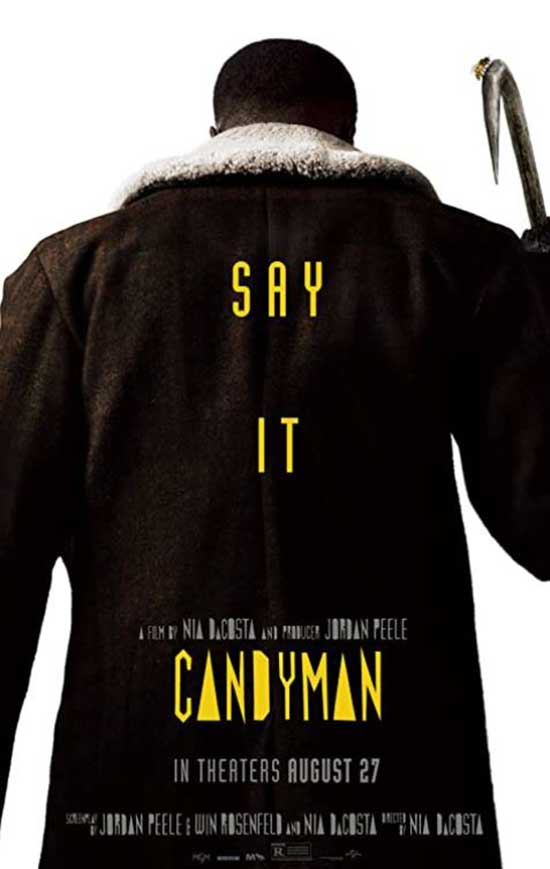 Candyman (1992) is a beautiful film. It’s not this slasher gore fest I imagine people think. Some of the characters should have been given more of a back story. It’s a movie that is intense. It’s uncomfortable and they touch on topics that a lot of films were avoiding. Candyman (2021) does the same thing in many ways.

The score by Phillip Glass is one of the most unforgettable in history of films. The eerie taunting music both draws you in, and frightens at the same time. 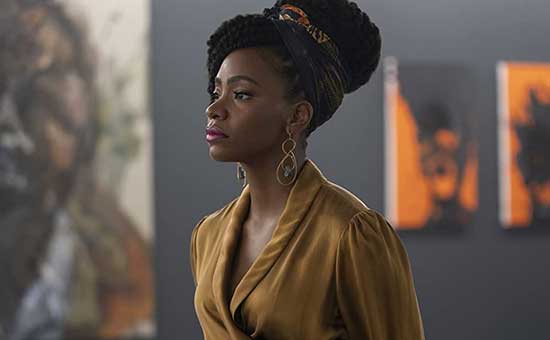 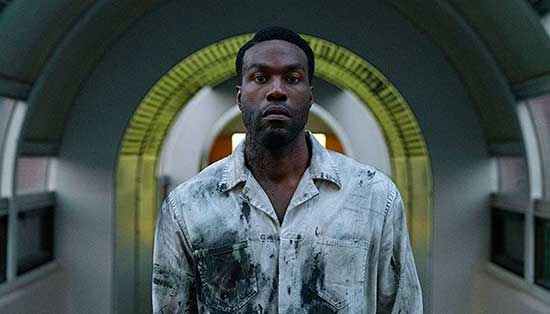 Tony Todd’s voice, mannerisms, and he is a theatre trained actor who can deliver. He makes the character human, he delivered lines that are unforgettable. The scene in the parking garage where he says, “Helen, Helen.” OH MY GOSH! GOOSEBUMPS. Just words… Words and it scared the shit out of people.

Candyman (2021) opens in Cabrini Green in Chicago in 1977. A story about Sherman Fields (Michael Hargrove) and William Burke (Colman Domingo). A story is told that leads into present day.

I don’t think people think about life outside of their own bubbles some times. There is a big world out there, there is horrific, unimaginable stuff that happens every day. 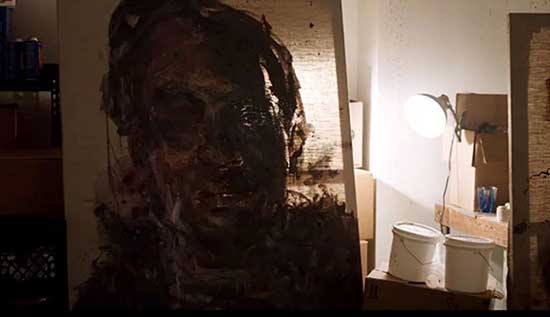 A response you may hear is, “I don’t watch the news” or read it. Horror movies are not meant to be comfortable. They are cathartic to some of us. They can be an escape for some of us. I went to watch Candyman (2021) and was bothered, nervous, on the edge of my seat.

We meet Anthony McCoy played by Yahya Abdul-Mateen II. He plays Anthony with such spirit and heart. Anthony is an artist. I won’t give away spoilers but I have lost track how many times, I’ve seen Candyman (1992) so some things stuck out right away. They don’t dwell on these things so, if this is the first time you are watching this film, I must say watch Candyman (1992).

The film is modern with the times and we meet Brianna Cartwright played by Teyonah Parris, my favorite part in regards to a few of the lighter moments was the, “NOPE!” I felt that with my entire being and I would do the same thing. NOPE, I’m out. Brianna is trying to work with Anthony, and he learns about the “legend of the Candyman.”

This film is so much more than gore and jump-scares. It’s Jordan Peele and Nia DaCosta throwing the truth at us full-force and unapologetic and it felt good to watch a real deal, no bullshit movie.

Colman Domingo is emotional and sad as William Burke. He delivers the “stories” and wonders why it’s still happening all these years later. Why no one comes except to learn about urban legends or hauntings. Brianna has a brother Troy played by Nathan Stewart-Jarrett. 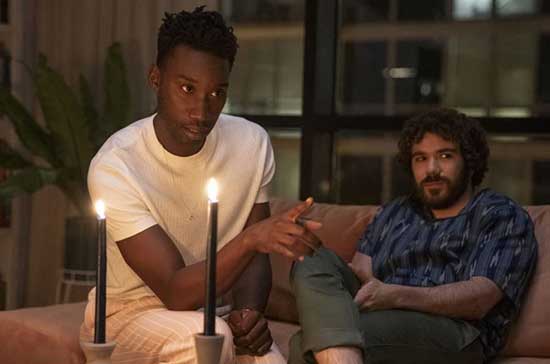 The special effects, costumes, the scenery, the designs, the shots Nia DaCosta gives us are beautifully executed. The kills are brutal yet some are left to the imagination of just how brutal it can be.

It was incredible to see an almost all-Black cast with a Black woman directing this powerful film. Those who have spoke up over the years about police injustice and brutality, some have ended in horrible deaths. They continued to fight and speak up no matter what.

I feel like this film is so much more than this Urban Legend lurking or haunting Cabrini Green. The legend feels like a transformation of what certain people expect. Anthony is trying to figure this puzzle out. I cannot say a lot and I know there have been a ton of reviews, comments, and opinions.

Michael Hargrove is amazingly talented; I checked the back seat of my car and heard the people in the theatre just gasping and slightly screeching. There are moments that will make the fans of Candyman (1992) happy or at least feel some type of way.

The way they used the paper puppets to tell some of the stories was unique. It made it nerve wrecking.

Vanessa Williams is a class act. She has so much heart and soul. There was a scene that made me tear up.

Yahya Abdul-Mateen II is incredible in Candyman (2021). He delivers this maddening, emotional, heartfelt performance. Candyman (2021) was a beautifully made film. It touched on things that society should know about and questions. I would say it’s one of the best films of 2021. 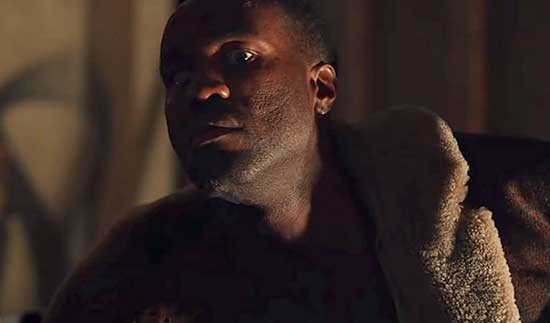