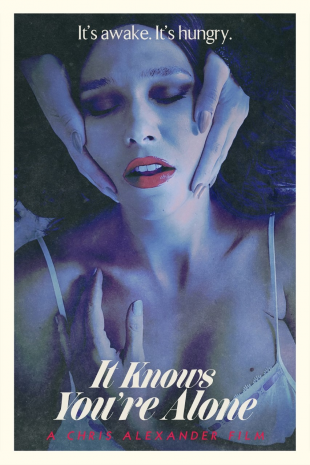 Synopsis: Combining the saturated color and melodrama of Douglas Sirk, the leering, low budget vibe of vintage ‘70’s Eurohorror and the psychedelic weirdness of TV’s NIGHT GALLERY, IT KNOWS YOU’RE ALONE tells the tale of Natalie (Bee Dawley), a woman living a lonely life of self-isolation in her crumbling, antique filled home by the sea. When she finds a massive, sinister nautical phone washed up on the beach, she brings it home and soon begins having vivid nightmares of a ghostly woman in black (Ali Chappell, NECROPOLIS: LEGION). As the haunted phone keeps ringing and dreams bleed into reality, the parasitic woman in black begins to invade Natalie’s mind and body.