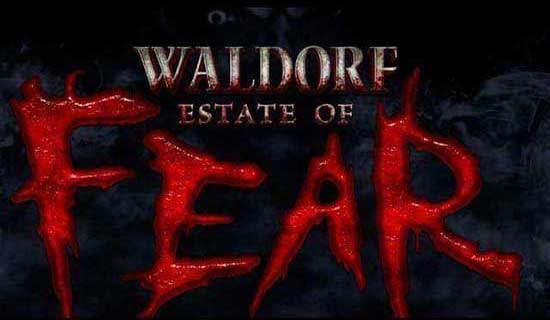 As spooky season approaches, Haunted attractions, Halloween, and Horror fans can smell the mischief in the air. Pennsylvania has some great haunted attractions. One in particular is The Waldorf Estate of Fear or if you love horror movies, you know it as The Abaddon Hotel in Hell House LLC. Hell House LLC. (2015) was written and directed by Stephen Cognetti. Angie gave us an exclusive tour of the house and showed us the basement, the infamous clown and so much more.

I’m always in search of the scary, creepy, unusual, and fun. The Waldorf Estate of Fear was requested and suggested so many times now, I lost count. I’ve heard of it, driven by it and I have seen photos, read stories and I finally reached out. The owner Angie was kind enough to do an interview and give us a tour. (My awesome friend Josh came along, Josh is HorrorDaddy85 on Instagram, Josh is also an incredible Cosplayer.)

I arrived at The Waldorf Estate of Fear and met Angie and she is wonderful. Her energy is so infectious. She was kind enough to even give us a tour of the infamous basement. Also, just a note, Angie mentioned a few things and please be kind and courtesy to the staff, to Angie and to the property. Yes, the house is amazing, it’s a location that was used in movies but it’s also a place of business. 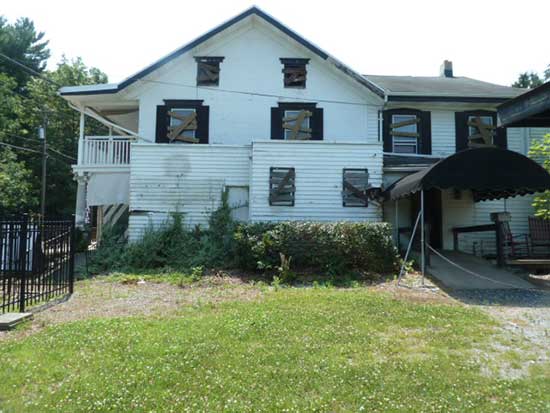 Angie also took us on a tour for her walk-through trail that leads you to some of the coolest and most realistic sets I’ve seen at a Haunted attraction. In fact, Josh and I met some of the guys today who were hard at work along with Angie, making all of this happen. She is also currently hiring actors on the Facebook page so make sure to check that out if you like scaring people. www.facebook.com/waldorfestateoffear

Angie took us on the tour of the incredible sets that her team is building. They are so talented. If you want a cool place to visit, check out, and even film at, definitely check out The Waldorf Estate of Fear and talk to Angie.

Angie talked about the Escape rooms and some future plans that she has in the works. The sets are elaborate. She went all-out. She has actors and family members that take part and play characters. Some characters we all know and love including: Leatherface, Freddy, Jason, Pennywise.

And yes, there is a corn maze. Is it awesome? YES, IT IS! If you are in the area, if you are visiting PA? If you are looking for fun, go to The Waldorf Estate of Fear.

You can buy tickets here app.escapetix.com/venues/763

When you check out the website you can read the story of Oliver. Angie wrote that story. It’s pretty epic and gives you goosebumps. It opens on October 1st and it is every Friday and Saturday. Then on October 31st, Halloween, the greatest holiday ever. Angie is planning for the Black Out.

Also, ESCAPE FROM HELL HOUSE IS ON OCTOBER 17TH

AND BLACK OUT ON OCTOBER 31ST. waldorfestateoffear.com/calendar.html

Interview with Angie Moyer (The Waldorf Estate of Fear)

Angie- I don’t own the building, I rent the building from Country Junction. My original Haunted house is in Palmerton, in a building that I own. We started there; we were there for about eight years and then we moved up here because there was more opportunity. We had a hay ride which I now switched to a walking trail. There is so much more opportunity to do stuff. I love Halloween, I love horror, and I love scary stuff. My birthday is in October and this is what I do. 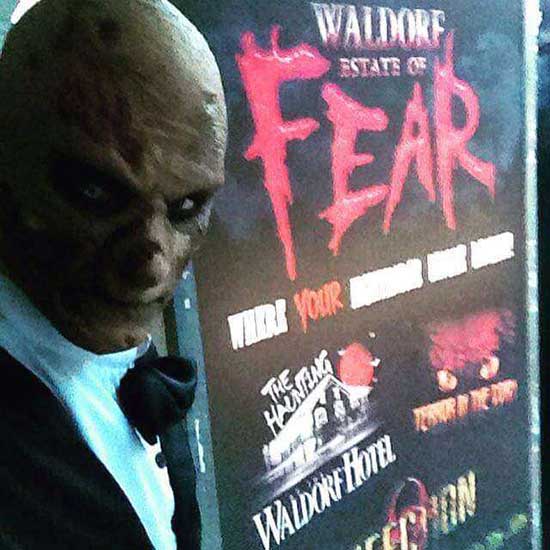 When is your birthday?

Angie- October 19th. My mom got me into it. Her birthday is in October too. She’s usually here working with me.

Did you ever have any strange or paranormal experiences here?

Angie- Sure, yes. Here and at the old one. At the old one, Mable lives there. She would move my stuff around.

Do you know how old the building is?

Angie- I’m not sure? It’s pretty old. I know someone died out front and they got drug over here, a long time ago. This used to be a restaurant here. There was a man who would stare at the corner in the bar. He kept staring at this corner. They would ask what he was staring at and he said, the lady in the corner.

How long does is take to set everything up?

Angie- It doesn’t take me too long because I have all these ideas. This is another room from the Hell House LLC movie. In the movie, we only see certain parts. We have a control room. This is the make-up room. This is the saying on the wall. The kitchen is in the movie. 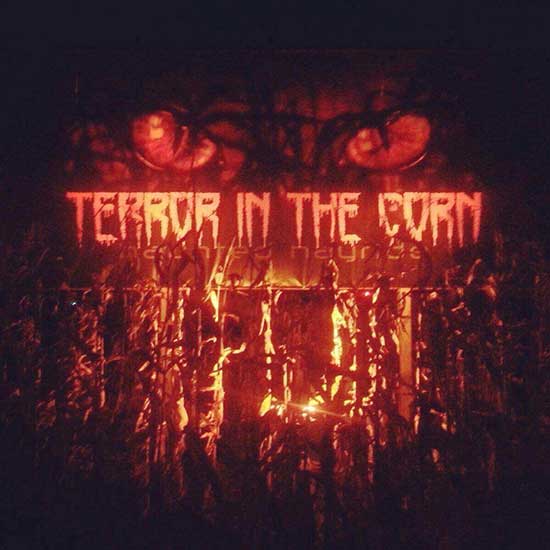 Did you leave everything as is?

Angie- I walked in and this stuff was here.

Angie- Yes, I wrote the story.

How much time do people get in the escape rooms?

Angie- You get an hour in an escape room.

How many actors do you usually hire and how can they apply?

Angie- They are applying online on Facebook right now. I’m hiring by the end of the month. I’m hiring about fifty or sixty. 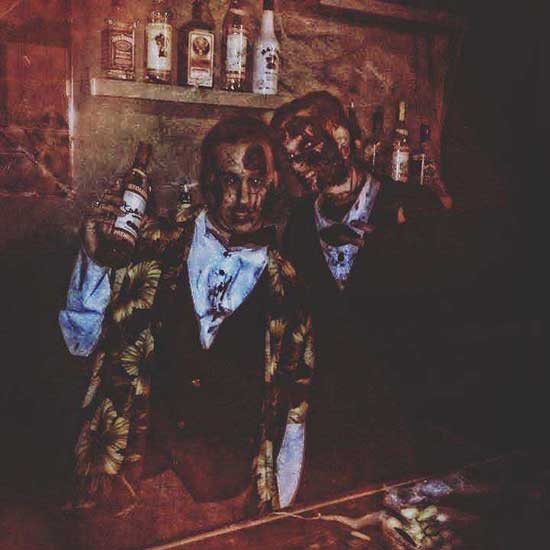 There are so many incredible rooms.

Angie- This is the witches and wizard room. For the haunt it’s going to be a library and its brand new and no one has seen it.

Can people do photo shoots?

Angie- Yes, I am doing a photo shoot on Sunday. We charge $75 an hour for photo shoots.

Oh my gosh, this room is incredible.

Angie- This is our Titanic room and the clock is in the movie. The Titanic Room is called “Unsinkable.” 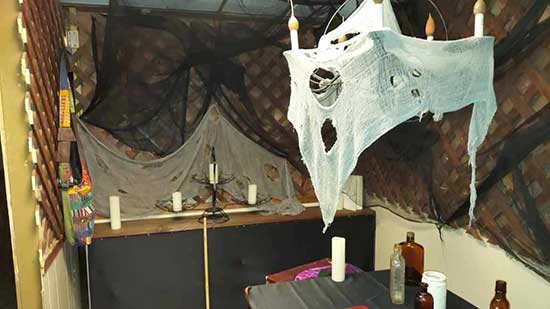 How long have you been doing this?

Angie- It wasn’t easy. My husband and I fought constantly. Justin who you met was there since the beginning. I had a daytime job and then I needed help. Now this is my normal life. I have three kids’ grown-up.

Do you have a favorite moment?

Angie- My favorite moments are when the actors come to me and tell me what goes on during the haunt. The first year I moved here it was really hard. I put money into it that I didn’t have and then people were not coming. For one week, I was like holy shit I have to pay the bank back.

Josh- Yes, all your fears are coming out.

Angie- Yes. I think my mission in life is to make sure that people know I care about them and want to help.

I love that and I love that you love horror and it’s a family thing for you. Some times the horror community and horror are not fully accepted. 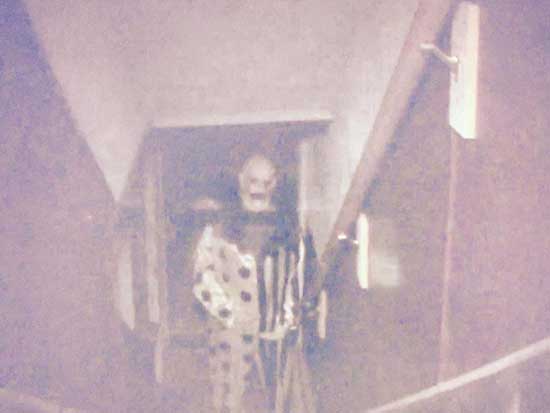 Angie- It’s a production. Some of the church people come and help paint and some of them look at it as evil.

Josh- That’s what they think right away. It’s the best community.

Angie- Oh yes, that is one thing. They are not allowed to break character but they will help.

You get a half hour; you break into the back door and you only have a flashlight. The characters from the movie are here.

Josh- So, you have the clown?

Angie- Yes, the clown is here. The dead girl from Paul’s room is my daughter. This is the basement. We always keep the basement locked so if it’s not locked, you know there is a problem. This is from the movie, the tape on the stairs, (Angie was kind enough to show us the basement.)Josh- Oh wow. 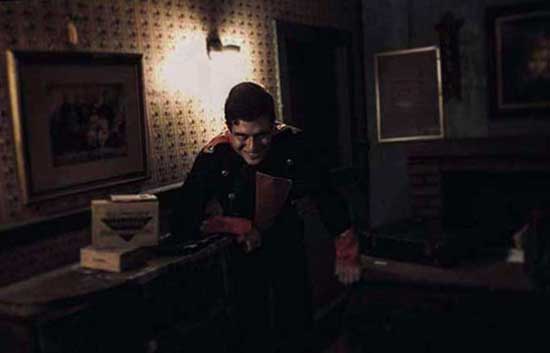 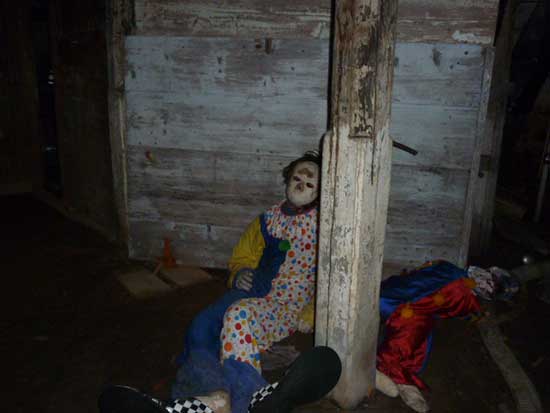 Were you part of the movie?

Angie- Yes, I was the set designer, a producer and I was in the movie.

Angie- So many of my actors were hired too. It’s pretty neat right.

(Angie showed us the blood stain on the floor from the movie.)

That’s so awesome. Did you grow up going to haunts?

(Angie took us upstairs to see 2C and through the room to see “Est Aperta Porta” is still on the wall. She showed us the bar.)

Do you have a favorite section or moment in the house?

Angie- My favorite moment is watching guys fall over, scared to death. 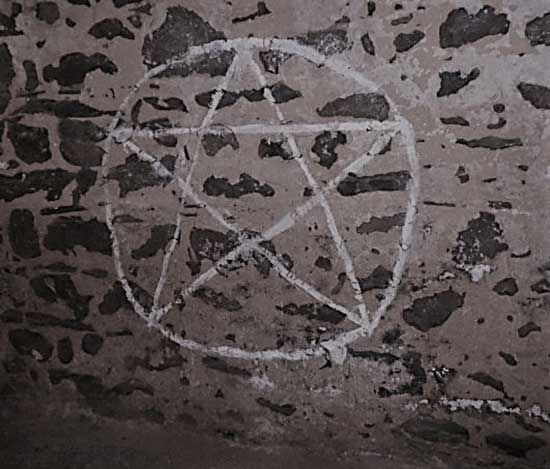 How long did it take to create the Pennywise set-up?

Angie- Every year I just keep adding to it. It was always creepy clowns and we just come up with ideas. My daughter was a Birthday girl when she was little, and she would lead them to her birthday party. It’s so hard to explain, when you get to go to work and it’s just fun.

You can tell you are so enthusiastic.

Josh- That is awesome.

What do you want to say to everyone?

Angie- It’s good old fashioned Halloween fun. I want you to be submersed in all of this.

I thank you so much Angie.

“May Your Nightmares Inspire You”

Keep sending those Haunted Attractions and check out HorrorDaddy85 on Instagram to see Josh’s work.