We are in the middle of the “dogs days of summer” and what exactly does that mean?   While some might refer to astrology, I look for answers in horror movies.  Here is a short list of animals to stay away from in this summer heat… or else.

But seriously, treat your animals well… because every pet deserves more.

Sponsored by The Goody Pet 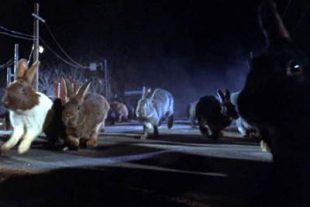 NIGHT OF THE LEPUS
Cole Hillman’s Arizona ranch is plagued with ‘mongrel’ rabbits, and he wants to employ an ecologically sound control method. As a favor to college benefactor Hillman, college president Elgin Clark calls in zoologist Roy Bennett to help. Bennett immediately begins injecting rabbits with hormones and genetically mutated blood in an effort to develop a method of disrupting rabbit reproduction. One of the test subjects escapes, resulting in a race of bloodthirsty, wolf-sized, man-, horse-, and cow-eating bunnies. Eventually the National Guard is called in for a final showdown with the terrorizing rabbits. 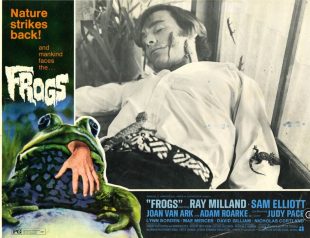 FROGS
Jason Crockett is an aging, grumpy, physically disabled millionaire who invites his family to his island estate for his birthday celebration. Pickett Smith is a freelance photographer who is doing a pollution layout for an ecology magazine. Jason Crockett hates nature, poisoning anything that crawls on his property. On the night of his birthday, the frogs and other members of nature begin to pay Crockett back. 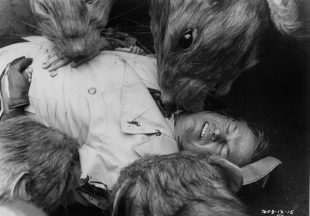 THE FOOD OF THE GODS
Morgan and his friends are on a hunting trip on a remote Canadian island when they are attacked by a swarm of giant wasps. Looking for help, Morgan stumbles across a barn inhabited by an enormous killer chicken. After doing some exploring, they discover the entire island is crawling with animals that have somehow grown to giant size. The most dangerous of all of these, however, are the rats, who are mobilizing to do battle with the human intruders. 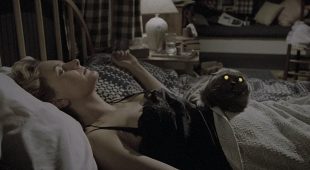 PET SEMATARY
Eager to start afresh, the young doctor, Louis Creed, and his family–his wife, Rachel, their daughter, Ellie, and their three-year-old toddler, Gage–move to their new home in the small rural town of Ludlow, Maine, alarmingly close to a busy highway. However, after the inadvertent death of Rachel’s cherished tomcat in an awful accident, reluctantly, a desperate Louis will take his friendly neighbour’s advice to bury it in an ancient Micmac graveyard: a mystical burial ground imbued with alleged reanimating powers. Now, despite the terrible results and the insistent warnings from a recently deceased, tragedy-stricken Louis has no other choice but to go back to the Indian cemetery, in high hopes that, this time, things will be different. Nevertheless, can the dead truly return from the grave? 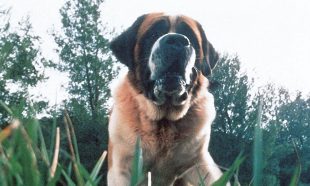 CUJO
Donna Trenton is a frustrated suburban housewife whose life is in turmoil after her husband learns about her having an affair. Brett Camber is a young boy whose only companion is a Saint-Bernard named “Cujo”, who in turn is bitten by a rabid bat. Whilst Vic, Donna’s husband is away on business, and thinking over his marital troubles, Donna and her 5-year-old son Tad take her Pinto to Brett Cambers’ dad’s car shop… the car fails, and “Cujo” is very, very sick…

For the most informative place on the pet-wide-web about cats and dogs, be sure to visit our friends at www.thegoodypet.com/