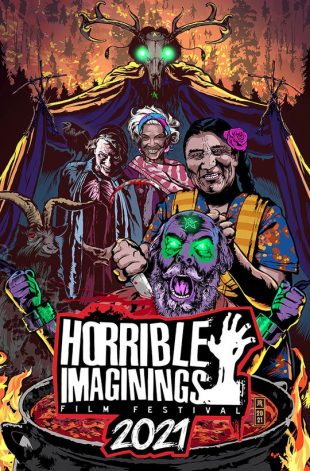 After the Horrible Imaginings Film Festival announced their first wave of globally acclaimed and thought-provoking projects from North America, Europe, Australia, and Kuwait including ten short films and the debut feature An Ideal Host from Filmmaker and Visual FX Artist Robert Woods, Horrible Imaginings (#HiFilmFest) reveals the second wave of their 2021 festival lineup including five more genre bending features such as the mind melting, sci-fi thriller Trans, Gia Elliott’s tale of monsters and doubt in Take Back the Night, and five HUGE, short film blocks tapping into the deep, dark corners of horror storytelling.

Returning to The Frida Cinema Thursday, September 2nd through Monday, September 5th, the 12th annual Horrible Imaginings
Film Festival will offer a cinematic and artistic experience that will challenge, educate, invoke, and enrich the viewer both in theater and virtually.

In concert with the special presentation called Horrible Realities, the Horrible Imaginings Film Festival will reveal the second wave of their 2021 lineup featuring five more films and five more short film blocks (all listed below) totaling the Labor Day weekend festival programming to over 80 films!

Returning to a hybrid model for the 2021 edition, the California based genre film festival will showcase a diverse slate of voices and narratives within the cinema genres of horror, science fiction, dark drama, black comedy, and fantasy. This year’s programming slate redefines the use of standard troupes and themes like alternative knowledge, broken trust, dark inspiration, isolation, social anxiety, transhumanism, and truth. These selections allow a fresh darkness to wash over the viewer through a range of complex and challenging conflicts, stories, and characters. 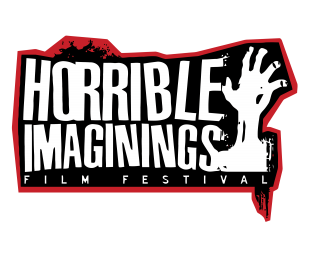 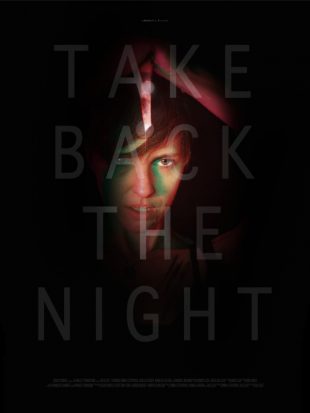 “Much of what the programming team has assembled for Horrible Imaginings’ 12th annual event showcases, is a unique brand of energy, bore from a pandemic era filmmaking community, not limited in ingenuity nor scope. We feel our catalog presents a
vessel to further exorcise our newfound anxieties & hope to widely extend this cathartic experience for our audience in the form of our first hybrid event.” – HIFF Programming Director Sterling Anno

Horrible Imaginings will be offering a virtual component with festival passes on sale for both in-theatre and virtual through Eventive. The “Final Wave” of programming and festival events will be released August 20th, including their “Opening Night” feature as well as scheduled panels, Q&As, parties, possible performances, networking sessions, events, and ways 3 to follow virtually. For continued updates, schedule, and to purchase passes, head over to
HiFilmFest.com and follow Horrible Imaginings on social media at #Horribleimaginings and #HiFilmFest.

Charon – Jennifer Zhang (73:00/USA)
A notorious hacker trapped under strict house arrest has her isolated, regimented world turned upside down when her boyfriend mysteriously begins dialing in with dark and
unusual requests.

Shorts Playing Before Charon: [Within the Frame], Afterbirth, and The Lovers
******
Followers – Marcus Harben (83:00/UK)
Jonty, an influencer with an ambition to reach over a million followers, will stop at nothing to become famous. When a demonic presence appears in his student house, Jonty decides to stream it and gain millions of followers. But at what cost? (NORTH AMERICAN PREMIERE)
******
Hunger – Manu Herrera (1:48:00/Spain)
A ballet dancer finds himself completely engulfed by his passions for dance, for music, and for…something else. Something ravenous that shakes him to his core. He is terrified of who he is and repulsed by his own cravings.

Short Playing Before “Hunger”: Curiosities 4
******
Take Back the Night – Gia Elliot (1:30:00/USA)
Fronted by an all-female cast, Take Back the Night is an allegorical tale of the dangers of victim blaming wrapped in a classic monster movie. (SoCal PREMIERE)

Shorts Playing Before “Take Back the Night”: Reptile House and Hell of a Pitcher
******
Trans – Naeri Do (1:32:00/Korea):
Minyoung Go is a girl who dreams of becoming a transhuman by transmitting electric shocks to her brain. After facing a serious assault from Taeyong Ma’s posse, she plans a revenge for the boys that bully her for having an eating disorder. She conducts an
electrical baptism and falls into trans.

Truther (5:00 – 7:00 PM)
Perhaps one of the most terrifying new words of the new millennium is “truther.” It signifies within its two ironic syllables how up is down, 2+2=5, facts can be “Alternative.” The very questioning of reality, of truth, is at the heart of these shorts.

Dangerous Knowledge (10:30 AM – 12:30 PM)
Is ignorance ever preferable to knowledge? Stories have, throughout history, warned of the dangers of learning beyond what we should. These stories explore this concept. Sometimes it is tragic, sometimes fun–and sometimes it is well deserved…

Social Anxiety, Broken Trust, and the danger of knowledge (1:00 – 3:00 PM)
Humans are a social species, which is part of what makes fears around our ability to relate to others so distressing. What makes things worse? Many times, those fears are founded! These short films each deal with fears or dangers with human interaction.

A Failed Trust (10:30 PM – 12:30 AM)
Trust is a word that is full of weight. The more of it we give; the more devastating the consequences of its breaking. These stories all deal with trust–trust in family, trust in the system, trust in authority, trust in our own bodies–and what can happen when it fails.