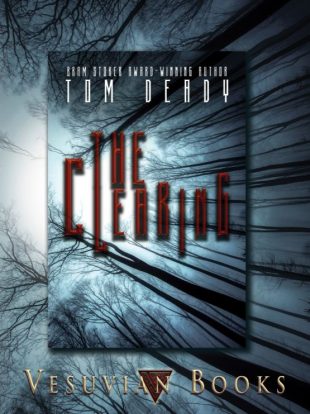 In 1972, sixteen-year-old Jeannette DePalma was murdered, rumored to be the victim of an occult sacrifice by a local coven of witches. Inspired by the speculation surrounding DePalma’s death, Tom Deady incorporates that “what-if” into his new Young Adult novel, THE CLEARING (Vesuvian Books, Aug 10, 2021). Though set in present day, Deady’s latest novel harkens back to the rise of occultism in the seventies and the “Satanic Panic” of the eighties. The story also touches on race and cultural class divides.

When Hannah Green’s dog comes out of the woods carrying a sneaker that contains a partially decomposed foot, she thinks it’s the worst thing that could ever happen to her. She is wrong. Hannah and her best friend, Ashley, decide to play detective but find themselves in the middle of a decades-old mystery. What is the strange old woman Mama Bayole hiding in her decrepit farmhouse? Why is the local librarian so determined to prevent them from researching town history? Who is following them around Hopedale, New Hampshire? The girls make a shocking discovery about what has been happening in the woods behind Hannah’s house. As they get closer to the truth, things take a dangerous turn, and they play a deadly game of cat-and-mouse that may end up costing them their lives.
“Tom Deady excels in creating a history and mystery that is engaging and action-packed,” says Midwest Book Review. “THE CLEARING is a memorable and thoroughly engrossing read that is difficult to put down and impossible to predict—just the ticket for a superior horror novel and should reach into adult reader circles, as well as teens.”

Tom Deady’s first novel, Haven (Cemetery Dance), won the Bram Stoker Award® for Superior Achievement in a First Novel. He holds a master’s degree in English and Creative Writing from Southern New Hampshire University, is an Active member of the Horror Writers Association, and a member of the New England Horror Writers. TomDeady.com