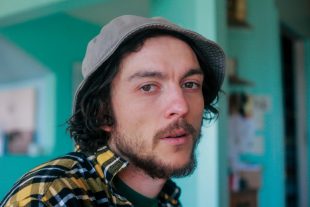 — What attracted you to BLOOD PUNCH?:

The writer and director. Eddie and Maddy were already friends of mine from doing a season of Power Rangers that Eddie wrote. I already felt that they were both extremely talented people and the BLOOD PUNCH script only confirmed my suspicions. I loved the mind-bending nature of the plot, the tongue in cheek nature of the comedy, the dialogue. There wasn’t much to dislike really.

— Tell us a little about your character?

Milton is academically talented, but he’s lead a fairly boring life. During his childhood he played it safe, studied hard, didn’t party too much. But now he finds himself in his early 20’s and he craves something else, something exciting. He’s never really fallen in love, never explored the edges of himself. So when a beautiful and foul-mouthed woman asks him to cook a bunch of meth and get super rich. He says fuck it, why not?

— How was it working with the director, Madellaine Paxson?

Fantastic. Madellaine is a pretty relaxed person when it comes to giving directions. She kept the tone of the set very chill and I always felt like she was steering us calmly to the end of the shoot. It was never too stressful to crack a joke with Maddy, which I loved!

— How does this character differ from other characters that you’ve played?

From the age of 13 I’ve played nerds, so Milton shared some similarities there, but most of my other roles didn’t see me covered in other people’s blood and sinew. So Milton was really great to play because he does a full 180 and becomes quite a threatening/confident/murderous guy. 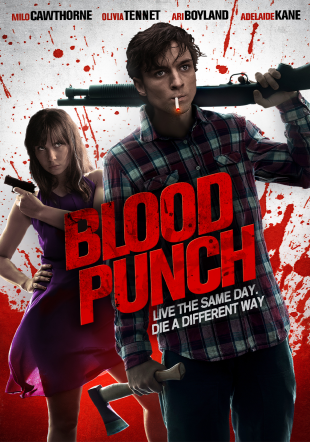 — What was your most difficult scene? Why?

Hmm, probably the scene where it’s raining blood on myself and Liv and we have to make-out and roll around in the dirt. This was hard because we only had one take to get it right. The ground was rough and stoney and Liv started to laugh half-way through, so I had to try and shield her sniggering little face away from the lens.

— What was your favorite day on set? Why?

Ari had to die many times in this film, and he was marvellous at it. But one of my favourite memories was him getting padded up to take some paintball hits, so that it appeared on film like he was getting shot for real. Eddie was shooting the paintballs at him and assured him it wouldn’t hurt, and it’d be over quickly.
So we start rolling, Eddie’s laying hit after hit into him and Ari’s doing a magnificent job of selling the shots, really using his acting skills to make it seem painful.
Then a stray paintball hits Ari just off to the side of the padding!! it strikes a small tender spot near his armpit.
Suddenly Ari is not acting hurt anymore! He reacts sharply and yells out, but he also knows there’s two more shots until we cut! So he has to keep going!
Somehow the difference in his fake pain/real pain reaction never fails to make me laugh.
(I’m aware this makes me look like a sadist, but this memory has truly kept me going through dark times hahaha.)

— What movie or event from your childhood turned you on to the film industry?

I was always into dressing up and doing weird stuff to get a reaction as a kid. So I always thought being an actor would be fine for me.
I did see a one man theatre show when I was 10 or so, the performer was incredible. During the show someone’s cellphone went off really loudly in the crowd.
Without skipping a beat, the performer on-stage, who was currently playing an old grandma, looked to the audience and said, in character “Ah! that’s my cellular phone! Don’t worry I’ll just let it ring, it will go to txt messaging.” Which got a massive laugh. Then he carried on with the play.
It was absolutely magical and so goddamn cool! So I figured I wanted to be like that.

— Name your top 3 horror films of all time?

Signs (lol but that one jump-scare got me!)
Housebound (nz represent!)
May (from 2002, got anna faris and jeremy sisto in it, found it on a whim, dug it!)

— Who inspires your creativity?

I hate to be saccharine but it would have to be my partner, Ella Hope-Higginson, she’s a huge inspiration for me. She’s a gifted writer, director and actor and her work ethic and the way she approaches work is so different (better) than mine.

What’s next for Milo Cawthorne?

I’m trying to learn how to wheelie a 50cc scooter, after that, maybe go for a long drive and chill out for a bit.