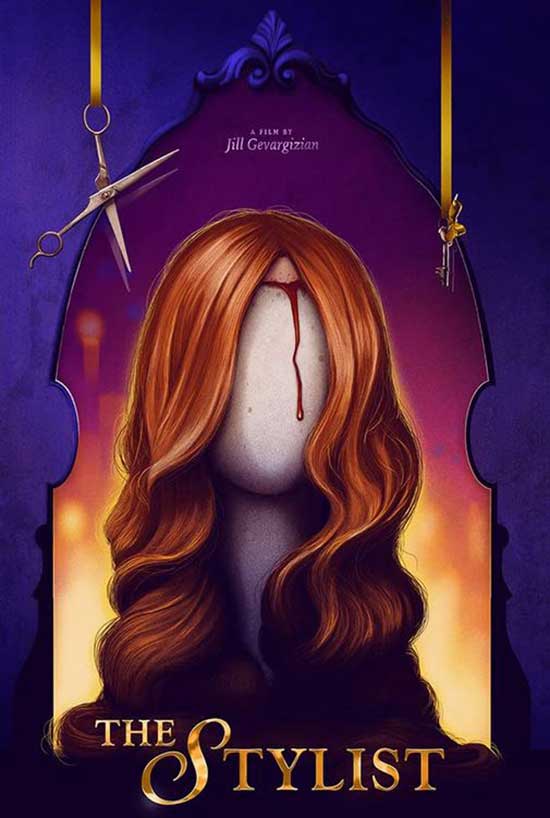 When loneliness consumes your life, things may get weird for you, and dangerous for others. You’ll discover just what that means in Jill Gevargizian’s “The Stylist”.

Claire (Najarra Townsend; 2013’s “Contracted”) is a very reserved hair stylist in a hip-looking salon. She doesn’t seem to have any friends, she doesn’t seem to socialize very much, nor does she seem to know how. What she does know how to do, is scalp and murder unsuspecting victims. Once she fixates on someone’s hair or belongings, or judges that the person isn’t appreciating the blessings in her life, she proceeds to drugging them, scalping them, getting rid of the body, and bringing the newly acquired scalp back to her secret “lair”. One day, however, she befriends a customer who asks for Claire’s help to get her hair ready for her wedding. Our stylist then becomes overly obsessed with her new acquaintance and things begin to spiral out of control.

Jill Gevargizian co-wrote and directed this female-led film, showing us the underbelly of a mentally deranged woman’s ways whose soft-spoken manners hide much more sinister motives. Gevargizian demonstrates some impressive directorial skills with some interesting camera shots, including side-by-side screens as we observe two characters simultaneously going about their morning routines, hobbies, and texting each other. To complement the writer/director’s execution, Nicholas Elert composed an appealing, almost hypnotic soundtrack that will reel you into Claire’s dark emotions and trance-like calmness as she scalps her victims. Speaking of which, the visual effects department of “The Stylist”, paired with some nauseating sound effects, bring forth some impressive practical effects when it comes to the scalping of the victims, all wrapped-up in a gruesome bow as Claire slowly pulls back on the skin.

Najarra Townsend gives us a brilliant performance (as she did in “Contracted”; if you have not seen it; do so), portraying solitude and social awkwardness at times, and bursts of emotional outrage at others. Her character, Claire, desires what other people have; from materials to biological parts of their anatomy, all while going through severe anxiety when she finally does manage to create a bond with someone. For instance, she is in a near state of shock when she has to decide which bottle of wine to purchase before going to visit her new friend. Despite her character’s murderous ways, Townsend even succeeds in making us feel empathy towards her as she is judged and ridiculed by other characters and her social awkwardness only makes things worse. The fact that her obsession with her new friend consumes her entire life doesn’t help, either. Brea Grant (writer/director of 2020’s “12 Hour Shift”), who portrays Olivia, Claire’s new friend, also delivers an outstanding performance, displaying a vast array of emotions throughout the entire plot.

Unfortunately, the latter portion of the film isn’t as effective as the first act. While the first half of the movie succeeds in captivating our attention in introducing us to Claire, her social problems, as well as her very, very shady side, the second half of “The Stylist” seems to stretch drag on, as we inevitably know what she is to come, but scenes and details of the plot seem to linger on. In addition, some hard-to-believe plot details force us to doubt the plausibility of certain scenes.

“The Stylist” is nonetheless an interesting film that portrays the life of an extreme introvert who has difficulty coping with the social world, all while concealing a disturbing hobby and obsession. Unfortunately, we don’t discover anything from her backstory that may explain her deviation from a normal person’s path to a socially flourishing life, we are witnesses to what she has become (despite the movie dragging on longer that it could/should have). With hints of Patrick Bateman (Christian Bale) in “American Psycho” and vibes from Seymour Parrish (Robin Williams) from “One Hour Photo”, Jill Gevargizian’s “The Stylist” receives passing marks with a score of 6/10.