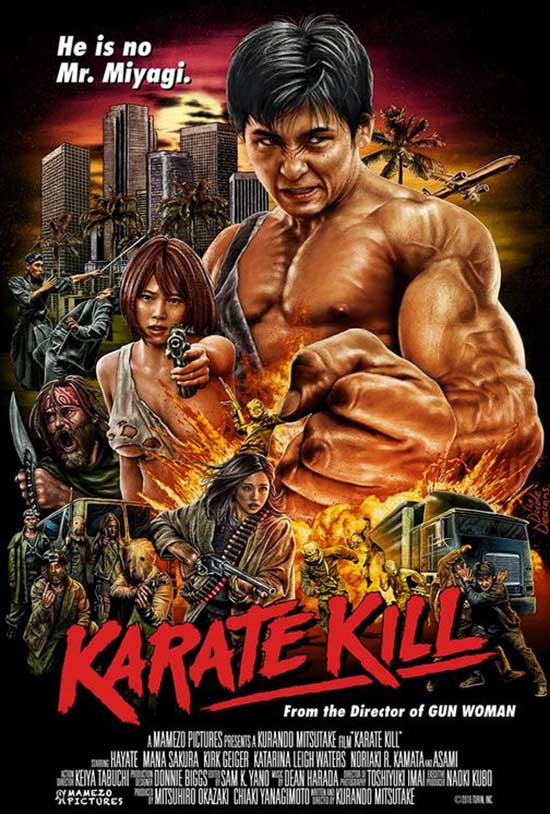 When a mysterious loner and Karate master Kenji’s little sister goes missing in Los Angeles, whoever stands in his way of finding her will face the wrath of a lethal KARATE KILL!

Director/actor Kurando Mitsutake brings us an old-fashioned revenge exploitation with gory action and gratuitous nudity. Karate Kill might not win any awards for originality or script writing, but it is still a surprisingly fun and entertaining watch. 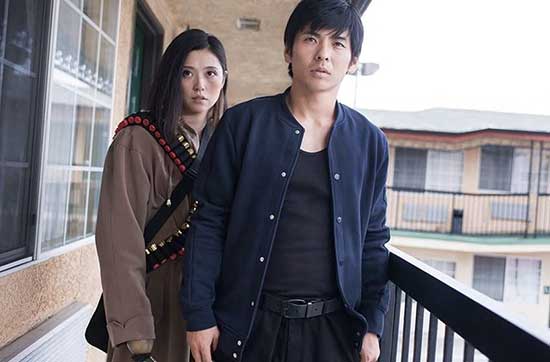 When samurai master Kenji’s (Hayate Masao) little sister Mayumi (Mana Sakura) disappears in Los Angeles, he has no choice but to fly over and go on a manic search for her. Kicking ass one lowlife at a time, Kenji eventually tracks her down in Texas, where she has been kidnapped by a local cult, Capital Messiah, whose pastimes include producing snuff content for the dark web. Joining forces with the only person ever to have escaped from the cult, the mysterious Keiko (Asami), Kenji embarks on a rescue and revenge mission with no mercy. 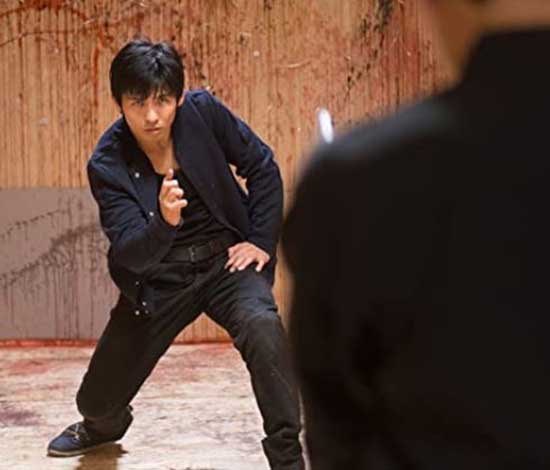 Karate Kill is exactly what it sounds like, a straightforward revenge mission with very little actual storyline. The characters are as paper thin as the plot and everything unfolds pretty much as one would expect it to, with no great surprises in store. However, that is not to say that Karate Kill is a bad film. It might not be cinematic masterpiece but is nevertheless a rather entertaining little package. The story moves in a swift fashion and the different action sequences follow one another in a timely manner, leaving no room to get bored. There is no notable character development or even much of a backstory for any of the people we meet, but that kind of works to the film’s benefit. It is not a story to be taken too seriously, so any attempt to create a harrowing backstory or even  realistic relationships between these paper dolls would have been doomed from the beginning. Action is all that matters and that you certainly get in ample amounts.

It is blatantly obvious that Karate Kill was not a big budget production, at times it even looks more like a television production rather than an actual film, but that does not really take anything away from the film. The low production values are contrasted with some very decent fight choreography, the quality of which took me quite by surprise. I have of course seen better but have definitely seen a lot worse as well and as a whole Karate Kill’s stunt team has done a creditable job with all the action sequences. Same goes for special effects. They too managed to surprise me not only with how bloody they occasionally get, but how well executed they were. The budget might have been small, but it has been well spent and even the gorier scenes such as someone’s hand being mangled in a garbage disposal unit, are carried out in a professional manner.

The action is admittedly hokey, but like the low production values, does not ruin the enjoyment of the film. Everyone seems to be on a slight overdrive all the time and emotion run high for pretty much everyone on the screen. The most maniacal, over-the-top of these is Kirk Geiger playing the evil cult leader Vendenski, having channelled his inner Charles Mason for the occasion. Katarina Leigh Waters as the Elle Driver inspired, eye patch wearing Simona and Tom Voss as her trusty sidekick Benning also bring some fantastically campy energy to the screen. Many of the actors such as Waters and Asami come with a notable pedigree in modern exploitation cinema and are therefore very much at home in a project such as this. No matter how cheesy some of the scenes may get, it is all very fitting with the rest of the film and in my opinion only adds to its charm.

If you love modern exploitation or just want something a little gory and completely mindless that you do not need to give a second thought to, Karate Kill is definitely the ticket. It is packed with fast paced action, gory violence and just good plain old fun.