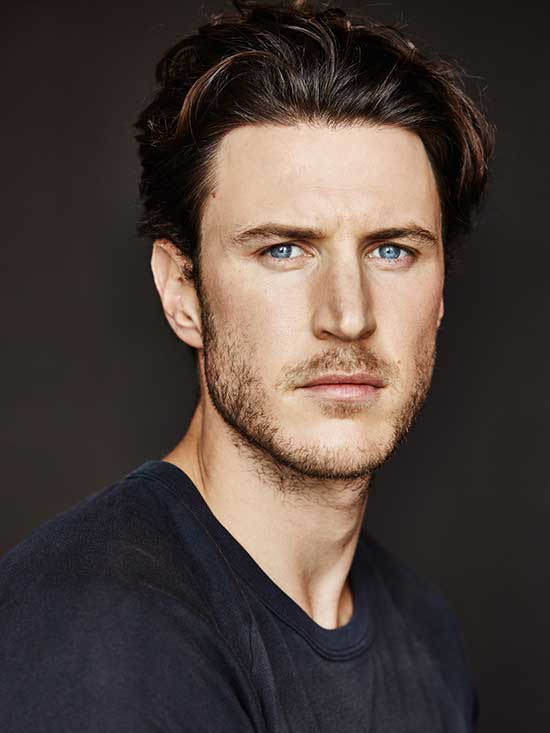 GREAT WHITE is available In Theaters, On Demand and Digital July 16, 2021.

SYNOPSIS: In GREAT WHITE, a blissful tourist trip turns into a nightmare when five seaplane passengers are stranded miles from shore. In a desperate bid for survival, the group try to make it to land before they either run out of supplies or are taken by a menacing terror lurking just beneath the surface.

Hi Aaron, how are you doing?

Aaron- Hi Janel, I am doing good. How are you doing?

I’m good. Thank you. Great White was such a fun movie, although it has some intense, sad moments. I felt for Charlie and Kaz. How did you get involved with Great White, and why did you decide to take on the role of Charlie?

Aaron- I’m so glad you connected to it, that’s great to hear. I was in Rhode Island at the time, and an audition came through. When it was time for them to choose, and for me to jump on board, I had a call with Martin Wilson, the director. He had such a great passion for not only this genre but like Hitchcock films and so on. He was passionate about making it a character piece, for me that was enticing. I love the horror genre but having a focus on who these characters are is exciting. 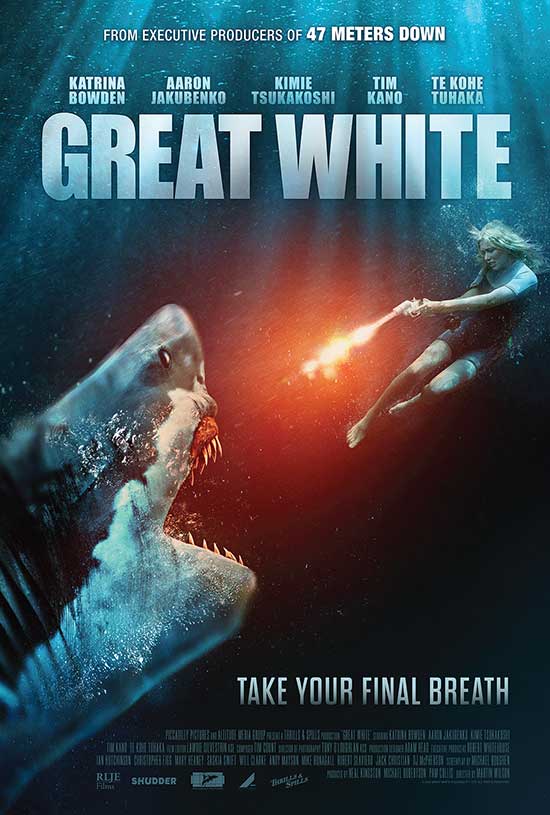 I loved that because you root for these characters. It was more than just an action/shark movie. There was some mystery, and the story with the characters was great. It was like Jaws, The Reef, and some Alfred Hitchcock thrown in.

Aaron- Yes, that’s definitely what the team was going for. I’m glad it came across.

What was it like for you filming Great White? There are some crazy moments in the movie. Did you guys get to film in the ocean at or was it a set?

Aaron- We filmed in quite a few different places. We were on a shore at one point looking out into the open ocean. We were on an island which was stunning. It was crystal green water, that’s where you saw us at the start of the film. There was a prawn farm which was wild, there were jellyfish everywhere, which was hilarious. We had to shoot around them. We had a big shed and an aviation tank for the deeper stuff. It was a lot of fun. Some of the action stuff without going into too many details. It was boiling in the shed so to have a nice splash and cool down was welcoming.

You have done some incredible films, action films, and you always play these amazing different characters. Do you have a favorite character so far?

Aaron- I feel really fortunate to have been able to play the characters that I play. You don’t get to dive into who that person is as much onscreen. Charlie was fantastic to play but in saying that, I got to play Commodus (Aaron portrayed Commodus in Roman Empire) which is the same character Joaquin Phoenix played in Gladiator. He’s a monster of a man. They didn’t want to just portray him like that, they wanted to understand why he was the way that he was. For me, that’s something that’s so interesting for as a performer. That’s also what made me interested in Great White. Why does Charlie behave this way? What is his relationship like in this moment, with himself and the other people. Yes, that was a lot of fun but Commodus was a wild, adventurous character to play. 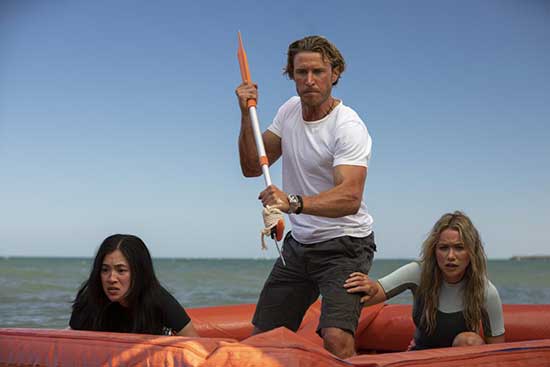 Oh, I loved that one too. What was it like working with Martin Wilson?

Aaron- Martin had a clear vision so it was nice to work with him. When you do an audition you send it in, and who knows what happens to it? Martin took my audition and he wanted for me the role, and I didn’t know it. Martin sent it to the producers, and he was pretty excited to work with me and meet with him from the get-go. When we got on the ground, it was a lot of fun. You mentioned Hitchcock, Martin is a massive Hitchcock fan. He knew what he wanted, and that was fantastic. Our cinematographer, Tony O’Loughlan was fantastic. It was a wonderful crew to work with. It was fantastic with this crew and the cast.

What do you want to say to everyone that will be watching Great White?

Aaron- You don’t them to know too much. I hope they go in ready to have some fun, enjoy the film. Go in with an open mind, be ready to be entertained, and hopefully connect to these characters and go on this journey with them. For me, that’s what I enjoyed.

Aaron- Yes, it was definitely one the driving factors. The relationship between Charlie and Kaz was the heart of the script. Katrina is easy to connect to, she’s a hard worker, and a lovely person. That made it easy, we trusted each other, and trusted the direction. That relationship is the core, the beating heart of the film so I’m glad it shines through.

Did you have any challenging crazy moments happen while shooting? The seaplane scene is crazy, and obviously the shark scenes.

Aaron- I’ll give you two. [Laughing] The aviation tank that we shot a lot of the deeper stuff in, a lot of the last act of the film was shot in the aviation tank. After being in the water for five minutes, you’ve got so much chlorine and you’re not supposed to open your eyes in chlorine. Your eyes are burning and you can’t see the actor that you’re a foot away from. It’s crazy and that was a wild thing to try and do. You can’t hit any marks underwater. That was an interesting element to work with. The other thing, that I’m not sure if I’m supposed to say this? At one point the seaplane’s floats started to fill with water. It’s not a working plane but it’s a real plane. The float underneath the plane started to fill with water and the plane started to sink. 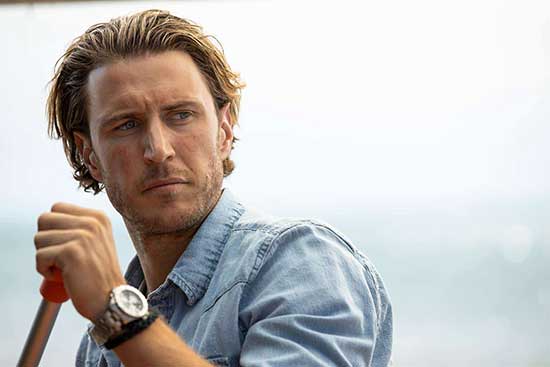 Aaron- We’re filming this survival film and it became a survival moment. We helped each other out and we all jumped out of the plane. It was definitely a moment I’ll take with me forever. We felt safe though, we had the safety crew right there. It was fun though.

How do you prepare for a role like this?

Aaron- I was fortunate that one of the projects I did before this was also a water film. It was a five month shoot so we had more time. I had a lot of training with water, it sounds kind of silly. But to do a film that’s based in the water and underwater is quite an experience. You need to be super comfortable under there. You need to be able to hold your breath, use the scuba gear, and understand all the signals. There was a lot of that work, and a lot of it was a refresher for me. We had some great scuba teams. Playing a Marine biologist was great. Whenever I play a character, my curiosity leads my work. I approach every character and the homework that I do is different. I was fascinated in the wonderful complex life in our oceans. I have a great love for sharks. They are beautiful, intelligent creatures. It was a lot of fun learning more about that and the world in general. 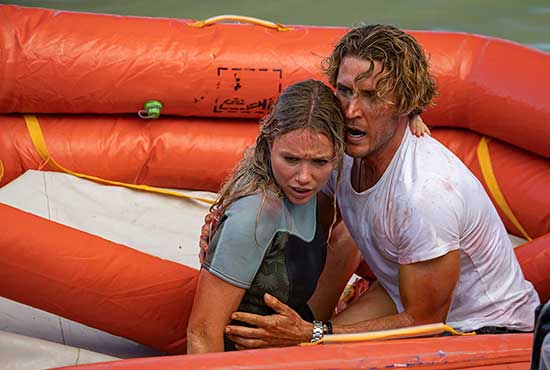 I loved that about Charlie and Kaz too. I think sharks are misunderstood. I think Charlie had respect for the ocean. That was great to see in a character.

Aaron- I couldn’t agree more. That’s one thing I was unsure about for starters, is this pushing people away? But that’s why I like using these opportunities to share my love for sharks. They are so important.

Aaron- I’ve had a bit of quiet time. I’ve been renovating our house, and that’s been a lot of fun. But I am back to auditioning and a few things have popped up. We’ll see, there are some exciting projects that I’m up for at the moment. We’ll see which one speaks and go from there.

Thank you so much Aaron. You did an awesome job in Great White.

Aaron. Thank you so much. I appreciate it, Janel. Thank you.