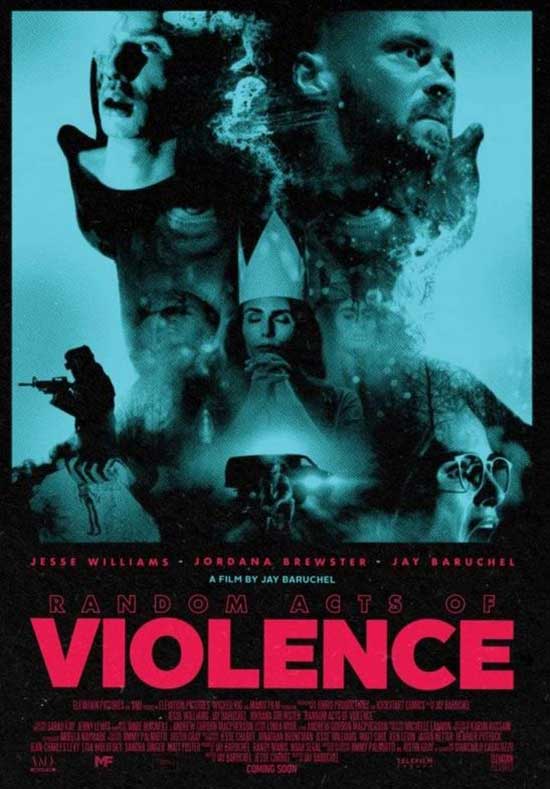 A horror comic book writer and his wife and team take a road trip to find inspiration for the ending of his franchise, but things go awry when someone starts killing in an eerily familiar fashion around them and turns their world upside down.

There will always be one thing I greatly appreciate: When a horror movie grabs my attention and keeps it for the entirety of the run time. Random Acts of Violence directed by Jay Baruchel did just that and then a lot more. What was clear from the start was that there was continuous attention to detail. The colors throughout the entire film were vibrant and stark; they matched the tension and levels of varying emotion that was prevalent in the plot. 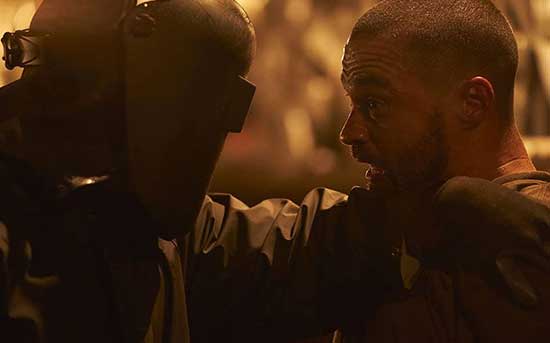 The film begins with an excerpt of our main character’s comic book. Todd, played by Jesse Williams, is a struggling comic book author who needs an ending to the last entry of his comic book series. In order to find inspiration, Todd, his wife, and Todd’s team hit the road to promote Todd’s latest work. Todd writes comic books about a brutal killer called Slasherman who is based off of a real killer who found his victims near I-90. Kathy is a writer who has a book in the works about the real victims of the I-90 killer. Their professional roles set up some delicious tension later on. When they’re on their road trip with Todd’s assistant Aurora and business partner Ezra, they encounter many strange characters and oddities. The questionable gas station attendant, a poor dead dog near the abandoned looking gas station, and run down hotels added to the grittiness and brutality of the film and narrative. 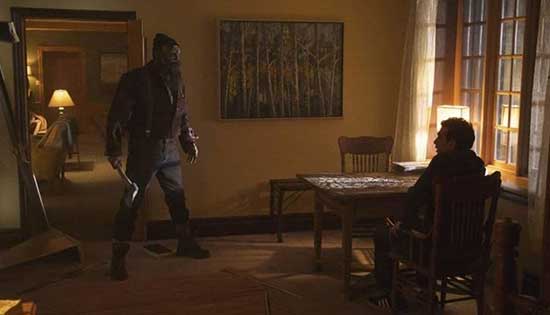 After a particularly uncomfortable radio interview about his comic book series and the seeming glorification of violence and gore from an angry local, who happens to be related to one of the real I-90 victims, Todd and Kathy argue when she tells him that she scored an interview with one of the other victim’s family members. This is where their views clash. I enjoyed this added layer of suspense as the lines between fiction and nonfiction blend together. Kathy acts as a voice for the victims while Todd and his comic seem to divide his audience and those around him. Here is where the narrative takes a turn. Todd starts getting strange calls by a man reading a sequence of numbers and murders start to take place.

First we run into three teens who get sick on the side of the road and are killed by the man who finds them. We eventually find out that the disturbing pose he left them in matches a scene from Todd’s comic book. This is the first instance, besides the dog, of gore and blatant horror in the film and it did not disappoint. One of the strong points of Random Acts of Violence was definitely the unrelenting horror and brutal tension that took place. 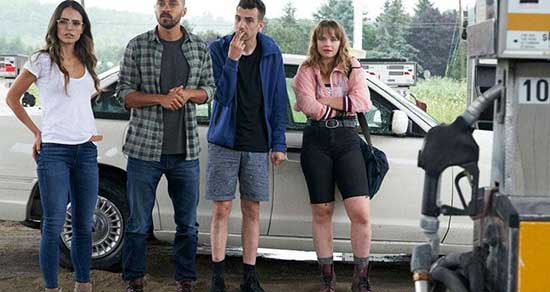 As the film progresses, the group becomes the target of the killer and they succumb to an unfortunate fate. First Aurora is killed and then beheaded, which also mirrors a scene from Slasherman, and then the rest of them are forced to watch a family being shot after trying to steer them away from trouble. The final act then comes into play and after Kathy drives into a tree while trying to escape, Todd, Kathy, and a dead Ezra are abducted and tortured. As the movie comes to a frenzied finale we find out that Todd’s mother was an original victim of the I-90 killer and Todd watched her die. Also, the copycat happened to be the original killer all along and he paused his killing after finding Todd’s comics because his work was being kept alive.

The ending features a really gruesome scene of all of Todd’s dead loved ones tied to a dining room table with blood and guts galore and the terrifying notion that because Todd couldn’t come up with an ending, his friends and family suffered. The third act alone makes Random Acts of Violence worth the watch. I immensely enjoyed this movie and found little to complain about except for the awkward acting at times and the loud music that overtook some of the scenes.

Not only was the cinematography striking, but the complexity of plot, the sheer brutality and horror, and the interesting premise made for a memorable viewing experience and work of horror that kept me thinking when it was over. I thoroughly recommend this movie for viewing at least once and I hope you enjoy this twisted one as much as I did.

I give Random Acts of Violence an A.