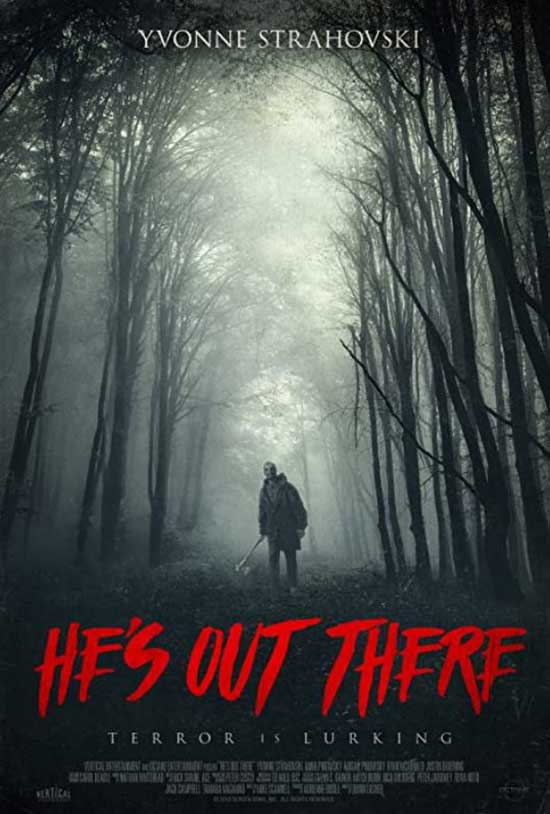 On vacation at a remote lake house, a mother and her two young daughters must fight for survival after falling into a terrifying and bizarre nightmare conceived by a psychopath.

Slasher films come and go as a sub-genre of the vast horror category. As a matter of fact, the slasher sub-genre is probably the sub-category with the most movies in the last 30 years; if not, ever. Writer Mike Scannell and director Quinn Lasher (almost “slasher”; he was made for this type of stuff…) teamed up for their first feature film ever in their respective roles with 2018’s “He’s Out There”. 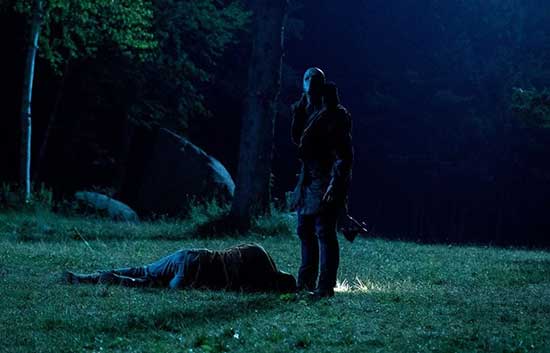 Laura (Yvonne Strahovski; “The Handmaid’s Tale”, “Dexter” and “The Predator”) sets off to her cottage with her two young daughters, Kayla and Maddie (real-life sisters, Anna and Abigail Pniowsky). As they await the patriarch of the family who is on his way as well, they play and relax by the mesmerizing lake. However, when exploring the nearby forest, Kayla and Maddie stumble across a red string of yarn that seems to lead them to a petite, fancy table, ready to host a tea party. When Maddie decides to eat one of the cupcakes, she falls quite ill, back at the cottage, and that’s when a mysterious individual begins to stalk them in the most peculiar ways.

From the get-go, “He’s Out There” shows off some impressive directorial skills with gorgeous scenery, dynamic camera shots, and, with the help of its music department, integrates an appealing soundtrack. Subtle, soothing and not overbearing in the calm scenes as well as in the ominous ones, while gradually intensifying as the story rolls on. The plot gets more mysterious and interesting as odd events begin to happen to the mother and daughters. Pages are modified in a children’s book that was read to the children; anxiety-inducing thumping sounds are heard throughout the house; and children’s songs are played outside. The type of creepiness definitely integrates a hint of “Babadook” into its style, which is rapidly, and strangely, alluring. 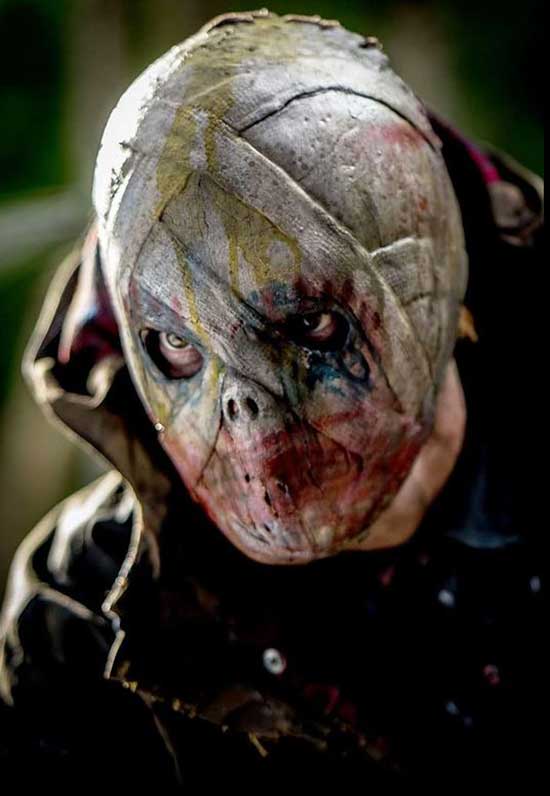 Yvonne Strahovski in the role of Laura, the mother, brings forth a brilliant performance. From caring for her daughters to concern for their wellbeing, to utter fright in the wake of a threatening trespasser and devastation in difficult moments; Strahovski can do it all, and she executes each emotion with authenticity. Anna and Abigail Pniowsky do an average-levelled job in their roles, where we’ve obviously seen worse child-actor performances, but we’ve definitely seen better. Then again, it is certainly difficult to find a gem of a child-actor. The Pniowsky sisters don’t quite succeed at acting as the most sympathetic children in a horror movie, yet they’re not overly obnoxious, either. 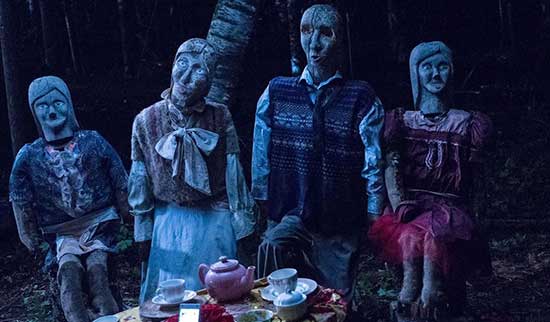 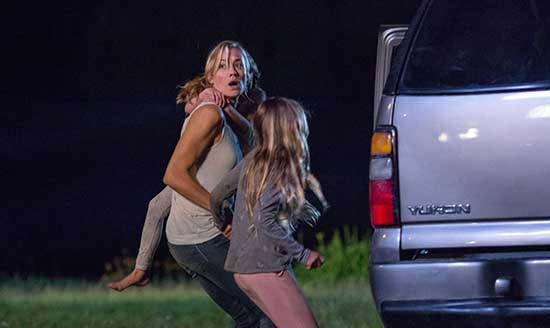 The crazed stalker has a decent-looking mask, although it does quickly remind us of the one seen in the “Collector” franchise. While some of his intimidation tactics have a mild “Babadook” flavor (as mentioned above), the way he toys with the family in such a sociopathic way around their cottage certainly possesses some vibes from Bryan Bertino’s “The Strangers” from 2008. In addition to that, the movie also takes a surprising turn to sheer brutality after such a soft first half. Without spoiling anything, there are some ups and downs to the antagonist. His main endgame has some sinister, yet intriguing, resemblances to the Quebec-made film from 2009: “5150 Elm’s Way”, yet his motives remain rather vague, which becomes head-scratching and perhaps too open to interpretation. 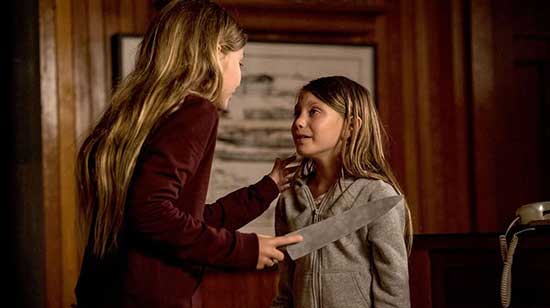 As you can summarize from the comparisons throughout this review, “He’s Out There” seems to, intentionally or not, grasp a few concepts from other horror movies from the past; mainly from the late 2000s. That being said, this should not stop you from checking it out as it remains an enjoyable independent film from a writer-director duo that took a very decent first crack at a horror feature film. Scannell and Lasher’s first project together merits a score of 6/10.