Chloe- Thank you. Yes, it is completely different. I’m glad it’s lighthearted because I think with what has happened in the past year, people will want to see something lighthearted.

How have you dealt with COVID? I know it’s been so horrible but I think that some people who do work in this industry have managed to create some amazing projects. Do you think COVID completely hindered everything or do you feel anything positive has come from it?

Chloe- I think we were so lucky because it was a good because our editor could sit and work on editing the film. You don’t need to worry about social distancing in an edit suite.  I did do some good writing during the period of lockdown. I did try to use it to my advantage creatively. 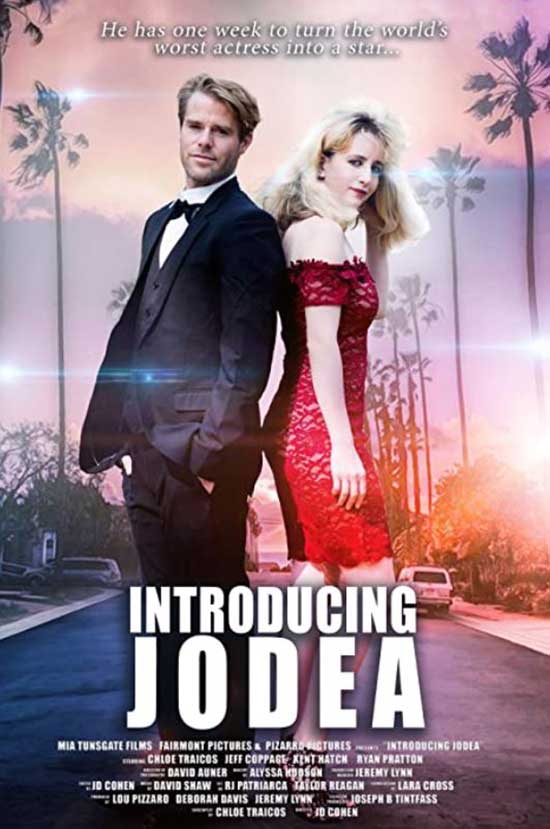 What was it like working with the director, Jon Cohen (Devil’s Cove, Love, Charlie)? He worked on Devil’s Cove also.

Chloe- Jon is one of my oldest friends. He directed my first movie; I Wish I Were Stephanie V in Australia. It was an independent film. He worked with me on the script in the early stages. I trusted him and I trusted his judgement on things. It was good. He was amazing and that’s another reason I say we got lucky with COVID because we only had for a short period of time. If COVID happened during the shoot, we would have completely messed up and we wouldn’t have been able to shoot. It was wonderful working with Jon.

This cast is amazing and you did such an amazing job. What was it like working with everyone?

Chloe- The cast was wonderful. We were lucky, we had some fantastic talent. They were so lovely and enthusiastic.

Chloe- Yes, so many challenges, you have no idea. The thing is, with making films, you have to have a certain level of tenacity. I think it was Jon who said, it’s a bit like Darwinism, the survival of the fittest. It was a low budget shoot and four days before we were due to start shooting, our production designer pulled, our production manager pulled out, and our first AD said he was going to quit after the first week. Jon and I were doing everything, but our first AD was great, he stayed on for the first week and then he fixed us up with someone else. We would be working long hours and I would come home every night, and instead of working on my lines, I was on the phone making arrangements. Jon and I pretty much did everything, and it was a hard shoot.

That is pretty crazy. I know you have done everything from producing to writing. How do you handle everything when something like that does happen?

Chloe- It’s totally crazy. You have to adapt, in Australia where Jon and I are from, you work on much smaller budgets, and people tend to wear more hats. Between the two of us we were able to do it. We had a brilliant director of photography and our crew was great. You have to make it work.

I know you wrote this beautiful story. How did this idea manifest for you?

Chloe- When I first visited L.A. from Australia, and I noticed the huge difference between rich and poor in California. I wanted to bring that across effectively in the film. When I was working in Sydney, I was working for a producer, and I was trying to find a part outside the agency and the idea just came to me. It took off from there.

What’s next for you Chloe?

Chloe- I have several projects in the works. I have a drama, a courtroom thriller. So much depends on what people are interested in.

Do you think that you learn something different after each project?

Did you always want to be in this industry?

Chloe- Yes, I think from as soon as I was old enough to figure out that the people on TV were acting. This was always what I was meant to do.

How did you prepare to play Jodea?

Chloe- A lot of Jodea is me, the clumsiness and stuff. Initially when she meets Zac, we we’re going to have Jodea fall at his feet. That was a joke between Jon and I. The first time I met Jon, I was an extra in one of his films, and he was shooting at a university campus. Jon was sitting at the top of the stairs, and I was carrying a lot of papers and walking up the steps. Jon tells the story that I tripped up the steps. He said that’s the only time he’s ever seen someone trip up the stairs.

I’ve done that already. I think a lot of us have.

Chloe- He said, it’s the only time he’s ever had a woman landing at his feet. When it came to the practicality of shooting, Jon didn’t want me running and tripping because of the massive window in the office. There is a lot of Jodea that is me. Jodea is kind of a more innocent version of myself. She’s gutsy and she does things that I would never dream of doing.

Do you think you would do a sequel?

Chloe- That’s so funny, we were talking about that. We have to see how the film is received.

What advice would you to someone who would want to be in the industry but they may be too scared or nervous?

Chloe- What I would suggest, show your idea to someone you trust. If you are really passionate about something, you just have to do it. This business is so tough, people are always looking for a reason to reject you, you can’t be sensitive. You can’t take things personally.

What do you want to say to everyone that will be watching Introducing Jodea?

Chloe- I think you kind of covered that by saying, you can relate to it. I’d like people to relate to it, and at the same time, it’s just a fun story. Don’t take it too seriously.

I thank you so much for taking the time to talk to me for Horrornews.net

Chloe- Thank you so much.