Horror movies? How about horror poetry. 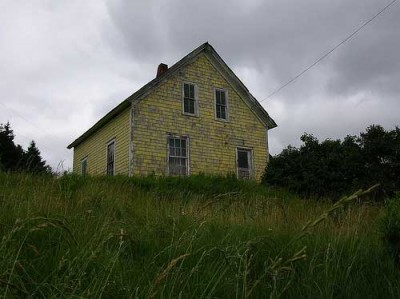 “Yesterday, upon the stair,
I met a man who wasn’t there
He wasn’t there again today
I wish, I wish he’d go away…

When I came home last night at three
The man was waiting there for me
But when I looked around the hall
I couldn’t see him there at all!
Go away, go away, don’t you come back any more!
Go away, go away, and please don’t slam the door… (slam!)

Last night I saw upon the stair
A little man who wasn’t there
He wasn’t there again today
Oh, how I wish he’d go away”

This is the poem Antigonish (or The Little Man Who Wasn’t There), by American educator Hughes Mearns. Originally written in 1899, it was incorporated as a song in a play called The Psyco-ed and was intended for children. From thereon in, it has grown into a bit of a legend but still holds a grip on childhood fear.

Think you have heard it before? You probably have. David Bowie’s The Man Who Sold the World makes an allusion to the opening lines. James Mangold’s film Identity opens with a reading of said lines as well. In actuality, there are over fifty movies, plays, songs and what have you that either directly references the poem or pay homage to it. In one case, it is collected in an anthology for “humorous and witty writings”. Humour? Yes that is one way we deal with fear.

In truth, this poem is written from Mearns’ perspective of a ghost story about a haunted house in Antigonish Nova Scotia, Canada. Having been born up the road in Cape Breton, I can attest to the spooky lineage of this town. Not only was Antigonish the place where all the “stained” girls had to go to have an abortion, it is old. Very very old. Founded in 1784 old (it may not be that impressive to those outside of North America, but for us, it might as well be Paleolithic). A colonial setting if there ever was one; a compilation of other world folklore collected in the new world Canadian wilderness.

It’s like combining moonshine with whiskey. Before you know it, you have been overtaken by its all encompassing fog. Sure, the Antigonish tourism board sells the town as a Celtic hug party, but back in the day when Mearns wrote it, the shadows grew longer and the east coast a shanty town of ghost stories.

I have done some research on that actual haunted home in Antigonish and came up bare. There really isn’t anything about a haunted house with a direct connection to Mearns, I guess updating Wikipedia wasn’t as cool back then as it is now. All I can tell you is this, as a child being brought up on the east coast; the first stories that were told to me were ones that scared the crap out of you. I’m not saying that parents in the Canadian Maritimes are masochists, but, there is a reason that these stories are told. There is always something in the woods or in the basement or being smote upon the craggy shores and whatever it is bears you ill will. As an adult I love it. As a child I spent a lot of time fearing things that I didn’t understand.

It was never about people or races or religions either…it was about things. Every barrel along a building at one point had a dismembered body in it or the foot of every bed has the spectral residue of a ghost who leered upon the person who slept.

There wasn’t a cold war era nuclear war to worry about because if you walk down a dirt road late at night, there are things in the wood that will drag you behind a stump and pull your intestines through your eyes. In all honesty, I see it as a keen sense of humour mixed with a warning. Protect yourself for ye do not what does lie beyond the tree line…that sort of thing.
As a poem, it is wondrous. The first stanza, in my opinion, is probably one of the more chilling collections of words in the English language. It instills fear, awe and a foreboding sense of the future. Sure, it may seem a bit like it is mean for children, but isn’t that where we all want to be sometimes? Back in our beds and fearing in awe of things that we don’t understand? The wonderment? The excitement?

I think in a way, it is why we adore horror and gore…it’s a revisit to those days when we white knuckled the sheets looking into the dark corners of our room and wondering what the hell is in the closet and saying aloud “I wish, I wish he’d go away”.

Whether he meant to or not, Mearns created a quick little horror tale for the ages, of the ages. When he wrote it, we feared what we don’t understand. Not to say that we still don’t but at least now I think we do it on purpose.