Hi Savvas, thanks so much for taking the time to do this interview. Captive AKA Katherine’s Lullaby (2020) was such a beautifully done film. How did this idea manifest for you?

Savvas- It all started back in 2014 in Thessaloniki, Greece – on my way home after a long night-out with friends, I shared a piece of pizza with a delusional homeless man. After a long conversation with him, I went back home and stayed up all night to write down this “idea” as a high level synopsis on my laptop. Two years later I started writing the film and had everything prepared to the last detail by 2018.

William Kircher and Tori Kostic did such an amazing job playing Evan and Lily. How did you get William and Tori prepared for everything that Evan and Lily go through in the movie?

Savvas- The whole preparation and the rehearsals with William and Tori took us 2 intense weeks where we shaped and analyzed every single scene together meticulously. Not only did they make my life so much easier as a director by being very easy to work with, but they also tended to always go the extra mile by bringing their own ideas on the characters. We cooperated seamlessly and took a very open-minded, artistic approach when building up the characters and for me the result was breathtaking and spot on.

How do you prepare as a director considering you also wrote the film? Did you face any challenges along the way?

Savvas- It’s like a special power to have the ability to picture the scenes as a director before even writing them, but sometimes it can be a bit tricky too. In this case, I wrote the first draft wearing the director’s hat, but soon enough I realized that doing it solely from this perspective wouldn’t bring the end-result I was hoping for. I had to step up by bringing in other hats and tweak the story and characters to make sure we stay on budget without compromising the plot or the emotions. At that point I was writing more as a producer rather than a writer, but I guess most low-budget films can become rather restrictive in that aspect. Since I had to delete some scenes the very last moment, I was trying to find smart solutions visually to fill the story gaps and keep the audience on their toes. That’s the part I needed to be creative the most, and make sure that no major compromises were made on the plot, at the expense of the restrictive budget.

Captive AKA Katherine’s Lullaby is one of my favorite films of the year so far. I found this one to be so different because of the ending. I don’t want to give away spoilers but that was a mind-blowing ending. Why did you make that decision?

Savvas- This is a question that I always try to avoid because of the spoilers but here’s my short and sweet take on it – the inciting incident and the ending were both my favorite parts that made me in love with the story that I had to bring to life. Many things have changed before the principal photography, but those stayed the same since day 1.

It looks like you shot the film in the middle of nowhere. The house sort of became a character in the film. It’s sort of a prison for Evan and Lily in a way. He stays stuck in those moments of what happened. How did you decide where to shoot the film?

Savvas- I came across Wrightwood, this little town outside of LA that caught my interest right away. Melissa Gutierrez (the producer) and I drove 5 times there scouting for the perfect spot, and on the last time we landed on this specific cabin, which ticked all the boxes except it was not isolated at all… There were a handful of other cabins around. We had to use certain angles to avoid showing the other buildings and get the feeling we were in the middle of nowhere – Manuel Velasquez (our DP) is very experienced in such environments so he nailed it! Regarding Production Design, Alix Seskin and I had long sessions to decide on specific props and on how to maneuver the cabin in such a way to feel both a cozy place and a dark prison at the same time. 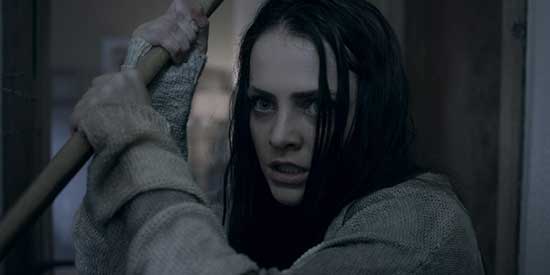 The entire cast did a great job. What was it like working with everyone?

Savvas- I have worked with Jolene Andersen in the past. She is a fantastic actress and a good friend. Chris Barry was a pleasant addition to the team and a fun person to have around. Meghan Hanako was cast a month before we started shooting but she caught up with everything in no time. With Jairus Carey and Tori Kostic, we arranged a few rehearsal days before everybody else in order to work on the first act of the movie. David Lee Hess was cast after an audition I had for the role of Evan. I called him in again to see if he could be a good fit for the role of the stepfather. His act was spot on with the character.

Savvas- I’ve been writing a lot lately. I recently finished the script of my next feature, which is another psychological thriller with elements of horror, playing with a survival theme and family relationships, only this time with a completely different flavor and twists.

What do you want to say to everyone that will be watching Captive?

Savvas- Enjoy the evolution of the story and the characters, and let your emotions come out freely.

How did you feel when you found out Katherine’s Lullaby would be shown at Panic Fest 2021?

Savvas- Panic Fest 2021 was the fourth festival to go to and probably the last one before we distribute the film in May in the USA and Canada. It’s a beautiful feeling to see years of your effort actually going places – Panic Fest was a great experience for us. A big thank you to the audience who watched the film and to all involved to accommodate such a well-organized festival – we’ve been receiving wonderful reviews and this always gives us an extra push to keep creating. Thank you horrornews.net for the interview too.