Panic Fest 2021 was so fascinating. 2020 was harsh and horrific for so many people. The “pandemic” and Co-Vid did a number on a lot of people. Normally, I’m strolling around a building and talking to people in-person, taking breaks and randomly doing interviews in hallways or wherever you can hear to talk. This year as I sit here in the living room after jumping in Gather, which is the virtual meet-up place for Panic Fest 2021 filmmakers and guests. I found myself even more fascinated with a festival that would take so much time to create a space for people to interact. I felt like I was there, in Kansas City or across the globe chatting with one of the many talented filmmakers.

The list of feature films was incredible but I found myself drawn to one short film after another. I don’t think I’ve watched so many films in a long, long time. I have always loved movies and horror is just my heart. I was so excited to see Witches Midnight, directed by Lisa Ovies (I think she should be the Spirit Animal for Panic Fest 2021. Just a thought.) I watched Blood Conscious, written and directed by Timothy Covell, and produced by his talented wife, Christina Behnke.

I spoke with director Sean Nichols Lynch, he directed one of the best films at Panic Fest 2021, Red Snow (which may I add is perfect for Christmas and Halloween, and even Halfway to Halloween.) Panic Fest 2021 was virtual and done in-person with all the safety precautions for Co-Vid. The virtual part of the festival made you feel like you were there. You get to watch such a variety of films by talented writers and directors.

I was able to interview Co-Founder Adam Roberts, and he was so excited about the Hybrid ticket and making sure people felt safe for the in-person screenings. Panic Fest Co-Founder Tim KC Canton was so helpful and answered questions. He created the virtual meet-ups for Panic Fest with Gather, which I just loved. It was so incredible to see so many filmmakers and people talking about movies and writing from the soul.

Panic Fest started on April 8th and I found myself immersed in the festival. I wanted to watch these movies. I will go back to what I said about the short films. I found myself watching Witches Midnight and then Koreatown Ghost Story, Mourn, Sweet Nothings, The Relic, The Good Samaritan, and Who Wants Dessert? 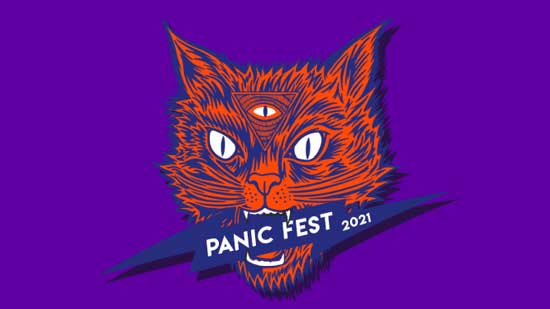 Then, I sort of reached my deep-dive moments, I watched Ryan Oksenberg’s New Not Normal Trilogy Super Cut, and then I watched it six more times because it was terrifying, wonderful, hilarious, I thought maybe it was a Mr. Bungle video that I missed, and I LOVED IT!

Bloodshed was another short film that just stood out so much. It’s a beautiful story. It was an experience, it felt like going to a festival because of the kindness of everyone. I would go in Gather every now and then and meet someone new. I would ask questions and everybody was happy to answer them. I felt inspired.

The feature films were just top notch. I was drawn to An Ideal Host, directed by Robert Woods and Tyler Jacob Jones wrote the film. It’s considered a comedy/horror/sci-fi film. It was beautiful, funny, and refreshing. JJ Pollack’s Late Night stuck with me.

Panic Fest 2021 had everything mapped out and everything was easy to navigate virtually. It was a sigh of relief, something to occupy the mind with all the madness happening in the world. The Podcasts and panels were great. You could vote for films and even go in Clubhouse which the amazing Bonnie Aarons was so excited to be a part of.

Bonnie said she was so excited to talk with everyone in Clubhouse. Gather even had games and you could go in and watch the films. The feature films were excellent. Red Snow, Katherine’s Lullaby, An Ideal Host, Blood Conscious, Jakob’s Wife, Honeydew, The Last Matinee, The Djinn, and more.