The global movie industry covers a wide variety of themes that include action, comedy, romance, horror, sci-fi, thrillers and adventure. We don’t really consider gambling to be a movie theme as there are not enough gambling movies out there in our opinion to classify gambling as a separate theme.

We think casino movies are more of a niche that is becoming quite popular as the online gambling market explodes. Guest author Alexandra Nereng takes a look at the gambling movies that slot into the horror niche. To find out more about Alexandra Nereng click here.

You will not find a lot of gambling horror related movies as the niche becomes a lot narrower when searching for the best horror casino movies. We take a look at the best movies involving gambling and horror below. These movies are listed in no particular order.

The movie Remains came out in the horror niche in 2011 and was based on the cult graphic novel from Steve Niles. The movie takes place in a fictional casino in Reno and circles around a zombie apocalypse. Those present in this run down casino have to band together and fortify the casino in order to protect themselves from the zombie attack.

While the movie slots into the horror genre, it is definitely not as scary as some of the top horror movies. However, the plot is interesting and the director has done a good job in translating the story on paper to a movie on screen.

Even if you are not a fan of horror movies, chances are you have come across the Resident Evil brand. This is because Resident Evil games have been around since 1996 and grew quite popular with games around the world. The popularity of the games laid the foundation for a movie to be produced.

Resident Evil: Extinction was released in 2002 and is based around flesh eating zombies who try to take over Las Vegas. Mila Jovovich stars in this movie that gives viewers a great tour of Las Vegas and its buzzing casino industry. Viewers will be kept on the edge of their seats as in the middle of all the horror and zombie attacks, a conspiracy theory plays out to keep the plot interesting till the very end.

We found that Norwegian players like playing online casino games and show a lot of interest in horror themed games. If you are a player in Norway looking for a list of top online casinos that carry a collection of old and new horror themed slots, we suggest you check out casinosider. 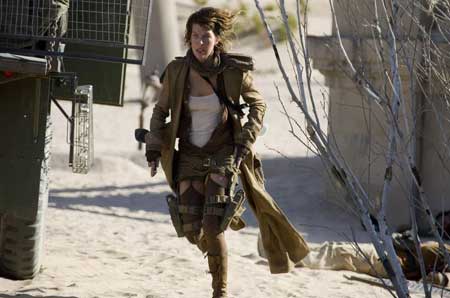 The Leprechaun is usually associated with the Irish but the plot around The Leprechaun movie is set in Las Vegas. The movie was released in 1995 and is part of the Leprechaun franchise series of movies. There are a total of 8 horror movies in this collection and the one that combines gambling and horror the best is The Leprechaun 3.

The stars in this movie are Warwick Davis, Lee Armstrong and John Gatins. The plot revolves around a pawn shop owner who has a statue of a leprechaun with a gold coin around its neck. He is instructed to never remove the chain but he ignores the instruction. When he removes the chain, the statue turns into an evil leprechaun who does not know what to do in Las Vegas.

The gambling aspect of the movie is highlighted when the leprechaun visits a Las Vegas casino and starts playing a game of craps. The leprechaun decides to go on the rampage by killing people, spreading fear and answering the evil wishes of twisted individuals.

13 Tzameti is a French based movie that came out in 2005 and had a lot of success in France and around the world. The movie was written and directed by Géla Babluani and stars George Babluani, Pascal Bongard and Aurélien Recoing. The plot for this movie is rather interesting and will force viewers to pay careful attention throughout the movie.

While the movie involves three French men it is based in Georgia. The word Tzameti is a Georgian word which means 13. The movie revolves around a poor immigrant called Sebastian who has a job as a construction worker in France. He gets mixed up in a series of events and ends up getting a sealed envelope with a mysterious job description that promises him riches when completed.

He ends up in a lonely cabin that is occupied by a criminal syndicate that are running a deadly game of Russian roulette. The number of bullets keeps increasing as the round progresses. 13 Tzameti has a 7.4 out of 10 rating on IMDB.

If you have never watched any of these horror themed gambling movies, we suggest you start with 13 Tzameti.