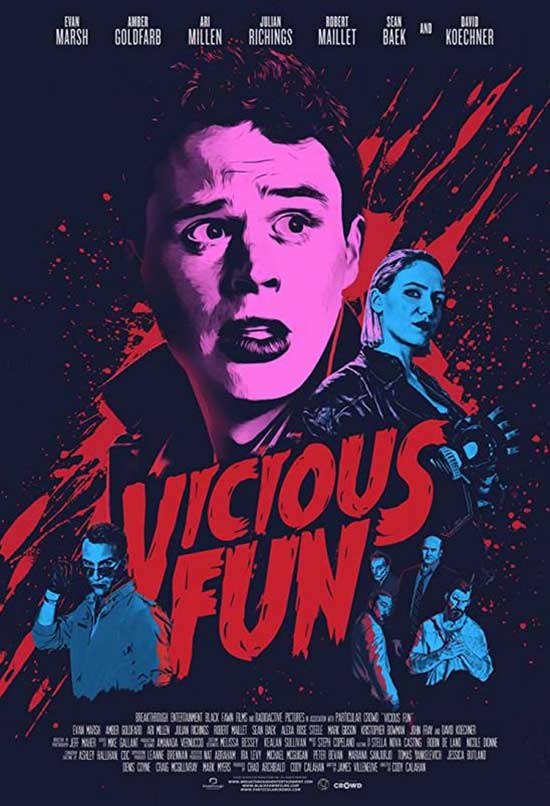 Joel, a caustic 1980s film critic for a national horror magazine, finds himself unwittingly trapped in a self-help group for serial killers. With no other choice, Joel attempts to blend in or risk becoming the next victim.

Cody Calahan wrote and directed Vicious Fun. Vicious Fun should be sub-genre. If you want to know what this movie is about? It’s the title. IT’S VICIOUS FUN!

The film opens in Minnesota, 1983 with a man sharpening his knives in a hotel room. He’s leaving and picks up Carrie (Amber Goldfarb). It gets vicious right away. Whether it was intentional or not, Vicious Fun has quite a few horror homages, and I appreciate it. 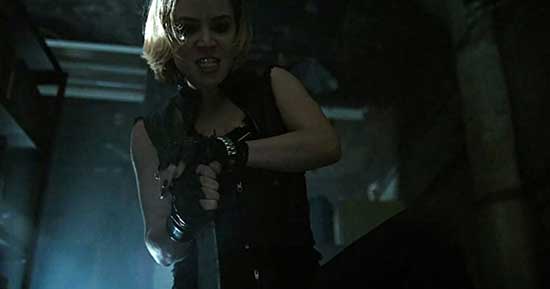 Evan Marsh plays Joel, and he reviews horror movies for Vicious Fanatics. Joel is interviewing Jack Portwood (Gord Rand). Joel has some ideas on what a horror movie should be… Jack doesn’t want to hear it. Oddly enough, it’s storming as I’m watching Vicious Fun.

Joel’s roommate Sarah (Alexa Rose Steele) gets dropped off by her boyfriend. She wants to have a girl’s night and watch Falcon Crest. Cindy (Joanne Jansen) is dropped off. Joel heads out, and he’s distracted by Sarah’s obnoxious boyfriend.

Let’s take a moment to talk about the music. It’s this trippy synth music. It’s not overwhelming for the movie.

Joel decides to follow Bob (Ari Millen), the boyfriend. Bob is creepy, he’s giving the creepy vibes. Joel gets a little drunk in the process and he runs into Carrie (Amber Goldfarb). I’ve seen a lot of stuff in life, I’ve seen people hurl in public but never on a pay phone.

Joel stumbled in to the serial killer self-help group as Phil. Phil (Joe Bostick) was seen a tad earlier in the movie. David Koechner (Thank You For Smoking, Justified, Anchorman 2: The Legend Continues) is great in Vicious Fun. 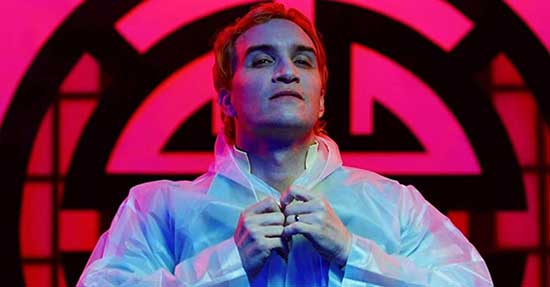 Zachary makes the rounds and each killer talks. They want ‘Phil’s’ story now. Joel is trying to find a way out of this meeting now during a break. There is a knock at the door. OH MY GOSH!!! You won’t believe who is at the door… Nope, I’m not even going to type it out.

The serial killer support group isn’t going too well. I grew up watching horror movies. I also grew up with a mom who was sort of taking care of herself since she was maybe sixteen. It’s hard to trust people in general.

Carrie decides to help Joel. Carrie gives Joel the run-down of these killers. Bob may be the Dahmer or Bundy of the group. This movie is entertaining, funny, creepy, and bloody. It’s fun!

There are all sorts of kills in this movie and an interesting strangulation.  The special effects and make-up people really outdid themselves with Vicious Fun. Ari Millen (Orphan Black, Rupture) is fabulous. His character is twisted and lively. So, things take a turn and the cops show up after a phone call.

Carrie and Joel are taken to the police station. We meet the detectives and Carrie tries to warn them. This isn’t going well but Officer Tony’s description of Horror and how it’s a genre with sub-genres within a genre underneath a genre, stuck in the corner. Horror is kicked out of the mainstream genres but HORROR can blend. It can weave in and out of mainstream genres. Watch the movie.

These cops just let the serial killer stroll right through the front door. Why do people always go an investigate the noise they hear? Vicious Fun asks all those questions.

Mike, the serial killer has a welder’s mask and a machete. CODY CALAHAN, THANK YOU for putting Julian Richings and Ari Millen in a movie together. That is one of the best things about Vicious Fun.

Throughout the movie, Joel’s know-it-all horror knowledge sort of goes out the window.

All these police station shenanigans are going on. Carrie decides she’s going to end this once and for all. It’s a brief fight scene but Carrie gets to take on Mike. She kicks ass.

It’s nice to see Amber Goldfarb getting to kick ass onscreen. Vicious Fun was excellent. It was brutal and gnarly. The story was fun. It’s definitely one of the best horror comedies, and I think it’s one my favorite films that I covered for Panic Fest 2021.