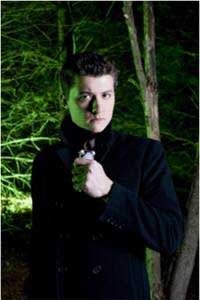 Ryan Buell is a full-time paranormal investigator and founder of the Penn State Paranormal Research Society. He stopped by New York Comic Con to promote his hit docu-drama “Paranormal State,” and his new book Paranormal State: My Journey into the Unknown.

What was your greatest paranormal experience at Penn State University?

I grew up in South Carolina and investigated there, and my first year of college I went to a branch campus in Pittsburgh. When I got to Main Campus I founded The Paranormal Research Society and with the organization I got my start investigating the local haunts on campus. That was a lot of fun; roaming around the library, and some other places, investigating the urban legends. It’s a huge campus and I still haven’t seen everything there, and I have been there for so long.

My greatest experience occurred in the town, it occurred offsite at a residence we got an email from, and I remember being very happy. Most of our emails, even back then, were at least an hour away, or came from: Pittsburgh, Harrisburg, Philadelphia, Delaware, Jersey. We were poor college students, and it would usually take us a couple of weeks to raise the funds to travel three hours away and get one hotel for eight of us so we would have someplace to crash as we investigated. There was this residential haunting that was really interesting. There was this weird paranormal activity that was really active, and I remember we kept hearing sounds from the attic.

It was all girls living there, the husband had just moved out, and it was increasing as he was moving out, so I said that I was going to go up into the attic. I had a student film crew with me, and they were going to document this case. I had a digital recorder with me, and as I go into the attic, I hear a sound and I wonder what the hell was that, so I instantly played back the recorder to see what the sound was, and what I heard was not only a sound, but I also heard a voice. It was this real scratchy voice and it said, “Go away.”

Did it scare you?

It was jarring because I thought I heard something move, or something bang. It was right as I was going up into the attic, and you can hear me on the recorder saying what the hell was that? As I am sitting up in the dark I am listening to the playback, and I hear a sound that says go away, very clearly. It was not one of those sounds where you have to listen, turn it up and stand sideways to maybe hear some UVPs, this was one that was so clear, and that was an interesting experience.

When you walk into a haunted residence do you feel a dark presence or an oppression, or do you rely on technology to tell you whether or not a residence is haunted?

I don’t claim to be psychic. I know that this may all sound crazy to skeptics, and sometimes I try to keep myself in reality, but you do go into a case, after so many years, I have been doing this for thirteen years, and you become a little more fine-tuned with the environment. It does not mean that you are psychic, psychic has this stereotype and expectation to it, sort of a Madame Cleo, or like the Whoopi Goldberg character from the movie “Ghost.” For me, I walk into a place and go, yeah, this place feels very strange. It feels like something is watching me. If it is a demonic case, preternatural souls that seek the ruin of our souls, fallen angels here to destroy mankind, again sounds crazy too, but when I walk into these places, those ones especially, I feel almost instantly sick to my stomach a little bit. I feel hyper aware, suddenly all my senses are amplified a bit, and it’s kind of like being in a fun house, and that’s how it feels.

What are some key signs that a house is haunted?

Well, outside of feeling things there are other obvious signs. When you know your house is haunted you have to rely beyond just feelings. If you walk into a place and for ten years you just feel weird there, then maybe there is something there, but it’s not really bothering you per say, but say if your bathtub starts levitating, I’d say that you have a haunting of some sort. There are also other types of phenomenon too, where it’s not about physicality, it’s not about a table levitating or shaking or hearing a voice, it’s also you as an individual suddenly become affected personality wise. You might even take on another personality and become more irrational, more irritated and more paranoid, more angry, or sad and depressed to extremes.

You’re this entrepreneur and your very happy and have a full life and then you go to this house, and literally as you walk into this house, you feel suicidal. Suddenly you want to be alone, but when you walk out of the house you’re fine. Now obviously there is mental illness, but ruling that out, and there is no explanation physically for why you are having these symptoms, sometimes there is what is called spiritual oppression. Say a woman commits suicide in the house, and people like to think in black and white and that a ghost is evil, or it is good. It’s angelic, or it’s the devil. Not the case.

They are complicated just like humans are, and almost all humans are in the gray. We can be really shady people for six months, or in high school we can be bullies, and later on in life we can be charity workers dedicating our lives to helping people, and what dictates us being bad one moment doesn’t mean that’s who we are forever. In the afterlife, say a woman commits suicide, which we’ve had many times in cases, then someone moves into the home who is very similar to the person who committed suicide and now it’s the wife who is experiencing something. Suddenly the wife starts to almost replay the other person’s events, and they don’t know anything about the other person and have no idea that there was a suicide, but they start to act a certain way or they start doing things and the husband is like, who are you?

It’s kind of like that movie, “What Lies Beneath” when Michelle Pfeiffer’s character takes on the girlfriend’s persona, that’s exactly how it is in a lot of cases, so that’s one area. You may not have any paranormal phenomena going on, but you will have that, and what’s happening is that the spirit is living through that person. Again they are not trying to possess them like a scary sci-fi horror monster, it is nothing like that. They might not even know, and they might not know that they are dead. They just start doing and don’t even realize that they are living through this living being. They are interacting with them and unconsciously possessing them. They may not even know it but a symbiosis forms, a connection, and if it is a bad connection, or if the person is going into a downward spiral, the same thing will happen with the human host, if you will.

Have you ever come across a severe situation where the individual being possessed was near suicide?

How do you go about helping them?

Sometimes just being there is enough. We just had a case, about a month ago, with a woman and we did not make it in time. Her family had lived in a house, and they all moved out, but she had nowhere to stay. They still owned the house so she moved in because she could not afford to go anywhere, but she said that she was being targeted by something there and that she was being affected by something there. She just wanted someone to believe her and they had recommended that maybe she should talk to “Paranormal State” so she said okay, I will send them an email. Now we never got that email, but for whatever reason, whether she sent it or not, a week later they found her hanging in the garage. We were called out there four weeks after this, but maybe we were there for her sister who was starting to go through the same thing.

You believe that the entity moved from her to the sister?

I believe whatever was there was demonic and for whatever reason was focusing on the family, so it wasn’t a house, it was the family. We were talking to them and discovered that six other family members had committed suicide.

In the same family?

Yes, it will be an episode coming up, and it will be very, very dark. We just shot it like a month ago.

What can we expect in the new season of “Paranormal State?”

It’s going to be darker. This season really examines human evil. It’s very psychologically dark. A lot of the cases we dealt with this season deal with human evil, a sense that someone did something to someone, dead or alive, and that is still affecting someone, or a location, and we talk about a lot of social injustices, which is really interesting. I don’t think that a lot of people expect that when they watch a ghost show. They think we will just walk around looking for evidence, but this show tackles some really big issues.

One of which is racial, another one is gender, and another one is family and it is about money. A woman was locked in her bedroom for the last six months of her life because the family wanted her house. She was old so they said that she could not take care of herself. She literally, I mean literally, spent the last six months of her life in one room and there were still some things going on because a new family moves in, decades later, and they are having some experiences in that room. They hear someone knocking saying, “Please let me out.”

And the family knew nothing about the previous owners at all?

What is your favorite horror movie?

Is there any love chemistry on the show at all?

There’s no time for that unfortunately. It’s kind of like, being that there are multiple people there, Mulder and Scully, where it’s intellectual romances between everybody, but it never goes any further because we are so overworked, and we go home our separate ways, but I dunno, maybe. We’ll see. 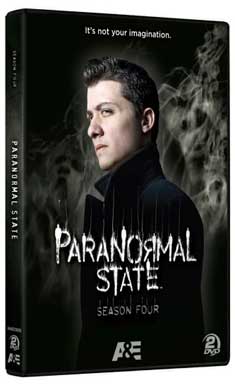 When Buell isn’t investigating the unexplained, he enjoys hiking with his puppy, Xander (named after a “Buffy the Vampire Slayer” character,” eating lemonheads and getting in to trouble with his best bud, Sergey (a former Soviet infant spy, codename ‘KGB’). Buell travels frequently around the world and is an avid movie junkie.

“Paranormal State” airs on A&E and seasons 1-4 are on stands now. Episodes for season 5 are currently in production and you can check out more at the official site below.