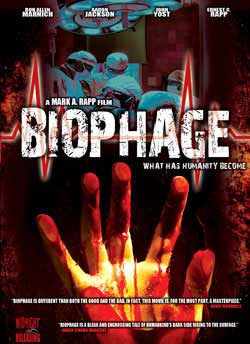 Thanks to the release of a biochemical agent that has ravaged the world zombies (or biophages, hence the title of the film) are roaming around devouring every living thing in sight. The very few human survivors that remain have gone into hiding to avoid becoming the zombies’ next meal. Cain, a soldier, and Bell, a doctor, are on a mission to locate survivors and gather supplies to take back to a research hospital. During their journey they come across not only zombies but a variety of human survivors as well (and some of them are even worse than the flesh eaters). Along the way Bell discovers that back at the research hospital that Dr. Miller, the man who has been working hard to develop a cure for the zombies (and who is now married to Cain’s ex), may have something far more sinister up his sleeve that will spell disaster for Cain.

Wow. Let me just start out by saying that I was thoroughly blown away by “Biophage.” I knew within a few minutes of watching it that I was going to dig it (of course it probably helped that we see a topless woman just seconds into it) and I wasn’t wrong. It has an interesting plot, great characters, and a neat little twist at the end (as well as a powerful and moving final scene). I thought that it was without a doubt one of the best zombie movies that I have seen in quite a while, and that is saying something when you consider how many have come down the pipe in the last couple of years.

I do feel that I have to warn the hard core zombie fans out there about the film though. If you’re looking for a violent, blood-soaked zombie flick where people are graphically ripped to pieces and eaten you may want to look elsewhere as I am not sure that “Biophage” is right for you. There are zombies in the movie and we see them eat a couple of people but overall that’s not really what the movie is all about. There is more substance to it than just a series of scenes involving people being munched on by the undead. I love blood and guts in my movies as much as the next guy and consider myself a gore hound, but I was so into the story this time around that I wasn’t bothered by the lack of gore, and as a matter of fact I really didn’t even miss it at all.

I also want to point out the fact that it is shot in black and white, and while I thought it was cool (it helped give it the same feel as the original “Night of the Living Dead” in my opinion), I am sure some people out there won’t share my opinion. I actually know people who won’t watch a movie if it is in black and white because for some reason they have it in their heads that a movie just isn’t any good if it isn’t in color (which means they are missing many good movies such as the original “Psycho” and even “Clerks” just to name a few). I think that being in black and white works for “Biophage” as it gives it a distinct feel and I don’t think it would have been as good had it been in color. If you are one of those people who won’t watch a black and white film (and shame on you if you are) believe me when I say you need to get over it and check out this movie.

Though there are many things to like about the movie I think the best thing about it is the characters. Cain (Ron Marnich) is a great character that you care about and want to see survive. The same can be said for Bell (characters named Cain and Bell…hmmm…pretty close to Cain and Abell, don’t you think?), as Aaron Jackson does a commendable job in the role (can you believe this guy was on the “Saved By the Bell” rip off “California Dreams” when he was younger?). Kristin Pfeifer is great as Cain’s ex, Julia, and John Yost is decent as her husband, Dr. Miller. Most of the people Cain and Bell run into are pretty interesting, such as an old man (who looks just like George Romero) who invites them in for a less than appetizing dinner and the oddball Reverend Shearer (played by Steven F. Clark, one of the film’s writers). Cutie Dawn Ali is good as Bianca, but unfortunately she doesn’t have much screen time.

The only problem that I had with “Biophage” was that the sound is a little weird at times. It is obvious that they did a lot of voice over work (especially when it came to John Yost for some reason) and as a result the sound is less than perfect. There are also a couple of scenes where the dialogue is badly dubbed and it looks like a Godzilla movie at times. Other than the problems with the sound (which is minor at best) there is nothing else I can really look at in a negative light. Hell, even the zombie effects are pretty good which is pretty amazing considering the fact that the film was shot on a low budget.

Every once in a while you’ll run across a movie that you’ve never even heard of at it turns out to be a hidden treasure. That is the best way that I can express my feelings when it comes to “Biophage,” as it truly is something special. I heard that it was actually shot years ago and they had trouble finding someone to distribute it for them, which is a shame. It is a billion times better than crappy zombie flicks such as “Zombie Nation” and “House of the Dead” and I just don’t understand why someone would have a problem distributing it. If you can find it check it out, I think that you will be pleasantly surprised by how good it is.