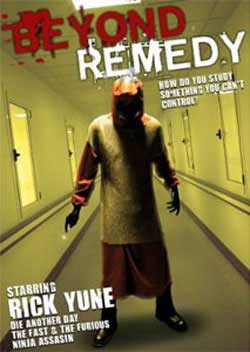 Six medical students travel to a clinic so that they can receive therapy for the fears that may hold them back in their chosen profession. The clinic is run by a Professor Gingrich and a Dr. Lee and the therapy is very confrontational. The clinic also has a frightening past concerning a doctor who gave thirteen children the wrong medication causing them to die. If the ghosts of the clinic don’t get our young medical students though there is also a strange figure clad in red that is silently stalking and killing all who want to leave the clinic.

“Are you willing…truly willing to come to terms with your fears?”

Gerhard Hrob’s Beyond Remedy is a strange film indeed; it seems to shift genres throughout the running time of the movie. The first half of the film seems to be almost torture p*rn with Prof. Gingrich and Dr. Lee’s tests to cure the students phobia’s then the last half of the film turns into a straight up slasher flick complete with a back story for the killer. The interweaving of genres in the film causes it to have very few slow points and actually does hold the viewers interest.

Beyond Remedy starts by showing a young medical student named Julia. Julia is studying and cutting up carrots, strange things start to happen however as blood seems to start pouring out from everything around her. If the blood wasn’t enough to creep her out soon a zombie boy also makes himself known, and he doesn’t seem like he wants to be very friendly. Julia has a fear of blades, why she has chosen the medical profession with such a fear is a question the viewer will have to deal with throughout the movie. Gerhard Hrob’s way of showing Julia’s phobia is to show the zombie boy and the blood, and it works creating a strange vision in which the viewer doesn’t really know what is there and what isn’t.

Julia soon arrives at the clinic where she is greeted by Dr. Lee and soon another man named Phillip comes up to speak to her. Phillip is Julia’s love interest in the film; he even talks about how hard it is to confess one’s love for another person when they are standing around a dead body. Phillip has a fear of heights, and he also has the uncanny knack of finding and using fire extinguishers to smash through anything that might be in his way. Eventually the other four students are also introduced and each one also has their own private phobia among them are a man who has a fear of mirrors and a woman who is scared of the dark. Gerhard captures the students fear really well and the cast does a great job with the roles they were given, they authentically look scared. 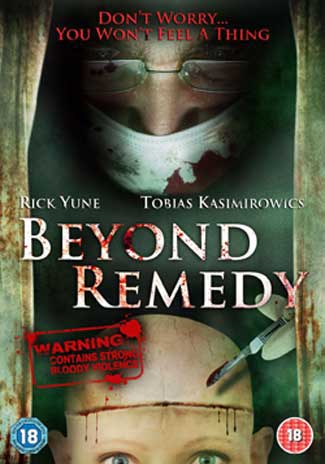 The man who runs the clinic Prof Gingrich is also soon introduced. He is an older man and he seems to yell a lot, this makes sense since his methods are so confrontational. Gingrich also has a fear of his own and that is human contact, there is a great scene between him and Julia where this is discussed and Julia attempts to force him to face his own fears. Gingrich tells the students that his therapy is confrontational and that they will begin to hate him, but when he is done their phobia’s will simply be part of their past.

The clinic itself also becomes yet another character in the film. Gingrich has designed the clinic so that each of the students constantly is faced with their own fear. Blades and mirrors are left scattered around, the elevator purposely freezes up and the lighting is quite dim. One of the students named Tina decides that she isn’t going to go through with such confrontational therapy and after telling Julia the clinic’s frightening past in which a doctor caused the death of thirteen children by giving them the wrong medication she decides she is going to leave.

Tina packs her bags and searches for Julia so that she can tell her goodbye. She walks from room to room until she finally comes into the lounge area. Instead of continuing her search Tina sits down and pours herself a shot of alcohol to take the edge off of her paranoia. The viewer is then introduced to a strange lurking figure in red. The figure stalks around Tina from behind before he finally smashes her face down onto the glasses in front of her causing the young girl to die from drowning in her blood.

The figure in red isn’t really seen a whole lot of the movie after that, in fact it isn’t until the last part that film changes direction and the figure in red turns into a straight slasher. The viewer instead watches as each of the students goes through tests to put their phobias in check. Phillip has the floors of the elevator collapse from underneath him causing him to hang onto the edge of the elevator pleading for help. The man who is frightened of mirrors is forced to sit inside of a room that is surrounded by the very things that frighten him. Gingrich also gives the student who is frightened of the dark a dose of medication that causes her to start suffocating; this is done on purpose as Julia finds her and immediately has to come to terms with her own fear of using a blade so that she can open a passage so that the young girl can breathe. Gingrich’s methods are very confrontational and if the students even think about leaving, well they will just have to deal with the stalking figure in red. 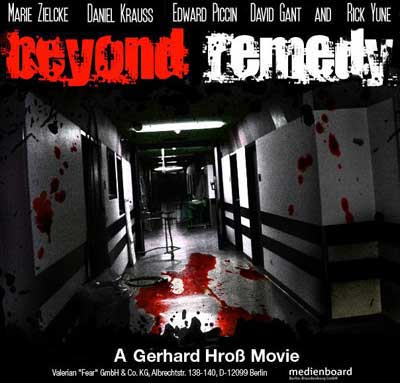 Gerhard Hrob’s Beyond Remedy is a twisted film indeed. There is a lot of dark stuff going on throughout the entire movie, and the reasons for all the phobias are explained though only Julia’s is actually shown. The cast does indeed handle their roles very well and there really are only a few slow parts in the film, these slow parts however are designed to build up the characters and give them back stories. The figure in red also is an intimidating presence when he is on the screen, so terrifying in fact that he causes one of the characters to run into an empty elevator shaft just to get away from him. The set and the score also set up a lot of the scares hardly letting the viewer become comfortable in their viewing.

As far as the gore score Beyond Remedy is packed with a lot of the red stuff flying around. You get to see the above mentioned face meets glass death there is also a character who is crushed by the faulty elevator and there is also a great eyeball stab/throat slash combo that will leave many gore hounds smiling. Beyond Remedy isn’t just limited to these shots though, victims are shot and slashed viciously throughout the entire last part of the film.

I’m going to call Beyond Remedy and intelligent slasher film. Instead of having your stereotypes of young teenagers the viewer watches medical students who are obviously there because they don’t want to be held back in their chosen profession. Even the figure in red’s back story makes sense when it is all revealed at the end of the movie. Beyond Remedy is defiantly recommended to fans of the slasher genre who like a little intelligence with their mix and also fans of films that build tension.