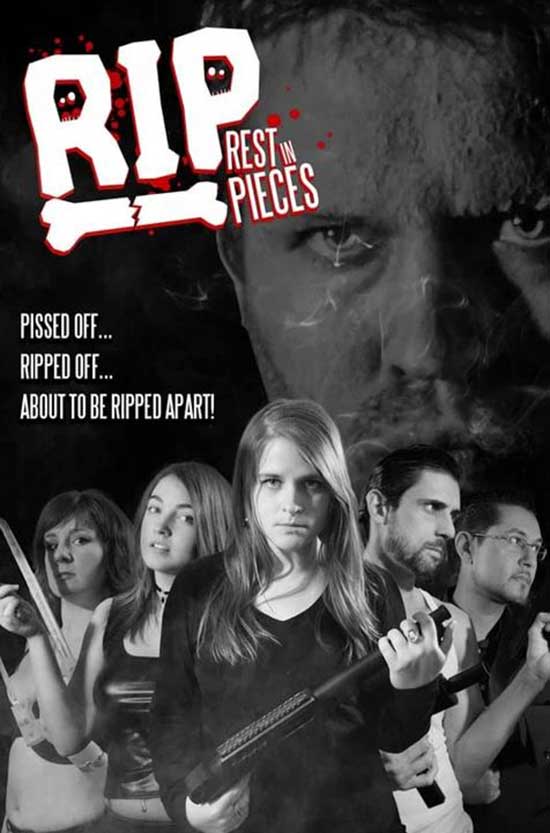 A group of less than desirable people are sent to an abandoned school to retrieve and item for a crime lord. Once they get there, they discover it isn’t as abandoned as they thought as a deranged caretaker lives there with his hulking, homicidal “son,” and none of them may get out alive after everything is said and done.

I’ve seen some of writer/director Dustin’s Mills’ films and most of them are a lot of fun, so I was looking forward to seeing RIP: Rest in Pieces. It took a little longer to get going than I liked at first and is more of a crime drama with horror elements as opposed to a full-blown horror film, but overall, I dug it for what it was. I don’t know if a lot of viewers out there would agree with me as I’m not so sure they would get what Mills was going for this time around, but I personally enjoyed it and didn’t think that it was bad at all.

The premise is straight forward, and you can tell there was some original thought put into it. We have a higher-level criminal who makes a bunch of lower-level criminals go get an item for him at an old, abandoned school building. It isn’t long after they get there that they realize that a weird guy and his even weirder “son” live there, and the son loves to tear anyone apart who dares to venture into their abode.

I thought it was a cool idea and I had a blast watching Sunny-the homicidal son-go to work on the trespassers. The plot is simple and not one that you must think too hard about, but that’s just fine because it works and makes an entertaining movie as a result. I like the fact that Mills tried something a little different with this outing and I thought that the results were quite impressive.

One of the things I liked the most about RIP: Rest in Pieces is that the violence is pretty damn brutal. Sunny doesn’t mess around when it comes to ripping his victims to pieces (literally), and as a result we get some awesome death scenes that incorporate some great-looking practical effects that are head and shoulders above any CGI effects that you’ll find in most mainstream movies with a higher budget.

Limbs are torn off, heads are bashed to pieces, jaws are torn off, and one unfortunate victim has her eyes gouged out and her face basically ripped in half (which was the highlight of the movie for me). The death scenes are brutal, fun, and gory as hell, and I loved each one of them. If you’re a gore hound like me, you won’t be disappointed with this movie as the violence that takes place in it is epic. In a lot of ways, the things that Sunny does to his victims are like what Victor Crowley does to his in the Hatchet movies, so I am thinking that Mills did this as a nod to those films.

The acting is not bad either. I’ve seen several films with Kayla Elizabeth in them and she never fails to deliver. She is quite awesome this go round as Aoife, a policewoman, and this may be her finest role to date in my opinion. Allison Egan is also impressive as tough girl Erin and was another highlight of the film for me (plus we get to see off her nice body at one point which is a definite plus). Kenzie Phillips is good as Fay, Mark Klein is top-notch as Runt (though I wish he’d gotten more screen time), and Dave Parker does a fine job as Marco (though his accent does get a little annoying at times and I think he could have toned it down just a notch). Overall, I thought that everyone involved did a great job and I think a lot of viewers out there will be surprised by what a great job everyone does in the acting department.

I dug RIP: Rest in Pieces (love the fact it is shot in black and white as it adds something special to it). It does start out a little slow but just be patient with it as it is worth it once the bodies start piling up. I thought it was an interesting, entertaining, and fun little low-budget flick (it apparently only cost around $1,000 to make) and goes to prove you don’t have to have a ton of money to make a decent movie if you have a good idea and a talented cast and crew. Check it out when you get a chance, I think you will be pleasantly surprised.