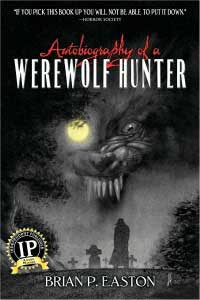 The werewolf. Simply put a monster of legend that has been, for the most part, ignored in modern horror. Vampires are all the rage in current pop culture leaving a void where the lycanthrope should be right along side them. Brain P. Easton remedies the lack of werewolves in new dark fiction with a vengeance in his amazing new novel ‘Autobiography of a Werewolf’.

The story starts with the main character, Sylvester Logan James, describing his childhood with his woodsman French-Canadian father. We learn Sylvester lost his mother during his birth and during a winter trip to see an old family friend, Michael Winterfox, loses his dad to a werewolf attack. Winterfox trains our young hero in the ways of the Reydosnin Warriors; an ancient and all but extinct line of ultra bad ass Native American warriors. Winterfox reveals he has hunted werewolves, or the Beast as he calls them, and young Sylvester’s rage commands him to do the same. So begins a lifetime of revenge and heart ache for our hero.

Winterfox trains Sylvester from the age thirteen to the age eighteen. The old man passes on knowledge of battle, the forest, the spirit world, and most importantly the Beast. Once of age young Sylvester strikes out for Vietnam as an outlet for his fathomless rage. Once the action starts here it never wanes. The story develops surprisingly solid amidst great action scene after great action scene.

I must take a minute here to tell you the action sequences in ‘Autobiography of a Werewolf Hunter’ are Grade A Hollywood film quality. Each is fast paced, well described and would leave Chuck Norris with aches and pains. Even though Sylvester hunts the Beast his entire life not every battle is with his clawed fanged and furry arch nemeses. Oh, no, in fact a fight scene from Sylvester’s time in prison (a long story you’ll have to read for yourself to believe) is one of the best written and paced through out the book. When our hero does engage the Beast the violence is brutal, vivid, and satisfying.

For those monster fiends like me, you will love this book. During his training, Sylvester learns of the several known kinds of werewolves. There is Noble Wolven were full blooded direct descendants of the original six beast princes. These wolves could change at will and were nearly the most powerful of their kind. A second breed is known as High Wolven. Most of these were powerful and respected but not full blooded. Then there is the baddest of the bunch, the Darkest Wolven. These monsters were raging unstoppable behemoths that never took human form. As Sylvester learns there are many different kinds that even Michael Winterfox didn’t know about. He travels from Canada to Vietnam to the United States and back. Before he can get used to Canada he is off to Russia. Kicking werewolf ass along the way. Sylvester finds clues to finding beasts through a highly honed instinct and his superior tracking skills. He picks up on a trail, always in original and interesting ways, and follows it to the beasts waiting at the other end. Once he finds the wolf he exterminates with extreme prejudice, always in original and interesting ways as well.

I can’t get over how great the action here is but in order to be thorough I also have to tell you how deep and engrossing the seamless story is and how naturally it flows. Mr. Easton peppers his brutal battle scenes with an ever-developing plot that grabs you with the strength of the beast’s claw. There are a range of emotions here that is uncommon for such an action packed book. The details in Sylvester’s travels lead me to believe either Mr. Easton researches the way Sylvester tracks or he really has been slaying werewolves for the past forty-some-odd years.
I not only recommend Autobiography of a Werewolf Hunter, I say if you are a werewolf fan you can’t live without it. This novel should be required reading on the subject of Lycans from now until the end of the world.

Tags Autobiography of a Werewolf Hunter